The global aerospace foam market size was valued at USD 5.38 billion in 2017 and is anticipated to progress at a CAGR of 6.1% from 2018 to 2025. Growing demand for lightweight materials in aircraft applications is expected to propel the growth over the forecast period.

The impetus on reducing aircraft weight coupled with rapid technological advancements to develop high-performance, yet cost-effective polymer foams can further contribute to the ascending demand for these foams from the aerospace industry. 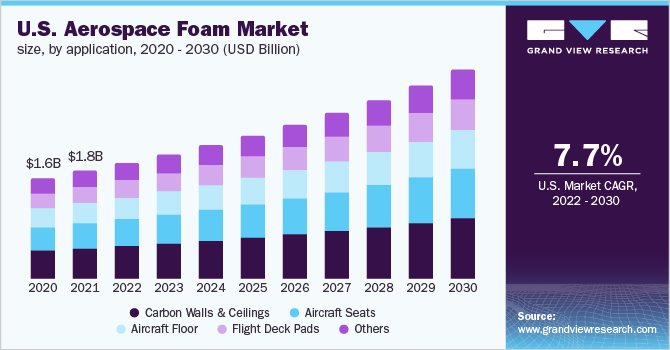 The market is fragmented in nature with various global and regional players holding a significant revenue share. The rise in demand for lightweight aircraft is anticipated to drive the growth of the market in the forthcoming years. Aerospace manufacturers in North America and Europe are expected to witness significant growth on account of the presence of leading airliner manufacturers such as Lockheed Martin, Airbus, Bombardier, Boeing, and others.

Boeing estimates that over 4,000 new airliners are needed in the South East Asia region in the upcoming decades, on account of the anticipated rise in passenger traffic, which is expected to grow at 6.2% annually. As a result, aircraft Original Equipment Manufacturers (OEMs), such as Embraer S.A.; Honeywell International Inc.; Rockwell Collins; and others are establishing their manufacturing bases in South East Asian countries, such as Singapore to meet the growing demand for airliners.

Consumption of various polymer foams such as polyurethane, melamine, and polyethylene is increasing in the airline industry owing to their lightweight and high rigidity. Polyurethane foams, owing to their closed cell structure, exhibit high rigidity and resistance to water and fire. The product meets the Boeing aerospace requirement BMS 8-133. Such unique characteristics make it one of the widely preferred types by aircraft manufacturers.

Polyimide foams are extremely temperature resistant, light-weight, durable, and non-flammable. They are used in the fuselage, air conditioning duct, and equipment insulation systems. The product is commonly used in composite structures in F110, F135 engines, B-2, F-117, and F-22 aircraft, missile structures, and sixth-generation engines. Polyimide foams can replace expensive titanium metals and result in reduced weight and thus increased fuel efficiency. Polyimide foams mainly find applications in the fifth and sixth-generation aircraft engines, which are exposed to high-temperature environments.

According to the General Aviation Manufacturers Association (GAMA), there are more than 440,000 general aviation aircraft across the globe as of 2018. The fuselage, bulkheads, and wings of the general aircraft are made with lightweight composites, which use polymer foams as components. 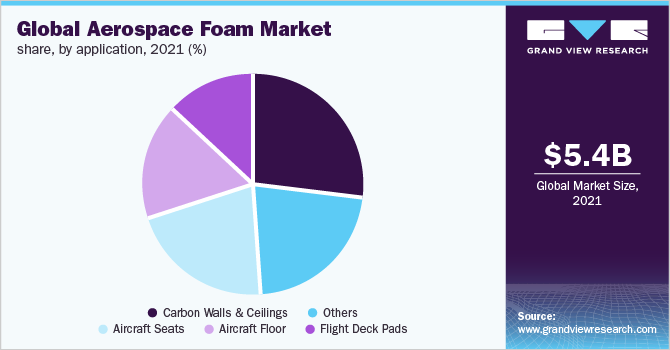 The U.S. captured the most substantial demand for polymer foam in the aerospace market in 2017 and is anticipated to continue to be the largest market over the forecast period. The high demand was primarily driven by the strong growth in the U.S. aerospace industry, especially the commercial aviation sector. This growth is attributed to the significant and transformative role of aircraft designers, manufacturers, suppliers, and service providers in the U.S. and global economies.

Polymer foams such as polyurethane and polyethylene not only reduce the weight of the aircraft but also result in lower costs for the airlines. As a result, the demand for polymer foam is expected to increase on account of the shift in trend towards low-cost aircraft.

According to the International Air Transport Association (IATA), Asia is the fastest-growing aerospace industry in the world. The passenger traffic is increasing on account of the rise in disposable income. The growth in passenger traffic is expected to thrive the construction of aircraft thereby driving the demand for polyurethane, polyethylene, and other forms over the forecast period.

The market is characterized by the presence of a few global players, such as Evonik Industries AG; BASF SE; SABIC; and DowDuPont Inc., leading the market. In the highly competitive market, developing new products using proprietary methods becomes a critical factor in the manufacturer's contribution to the value chain.

Leading companies have developed proprietary technologies for manufacturing polymer foams suitable for aerospace applications. For instance, Zotefoams developed a proprietary Nitrogen Expansion technology for the production of polyethylene-based foams. Manufacturers such as Evonik, BASF SE, and Zotefoams are also integrated horizontally across the value chain and hence, gain a slight competitive edge over their competitors.

This report forecasts revenue and volume growth at global, regional, and country levels and provides an analysis of the latest industry trends in each of the sub-segments from 2014 to 2025. For the purpose of this study, Grand View Research has segmented the global aerospace foam market report on the basis of type, application, and region: