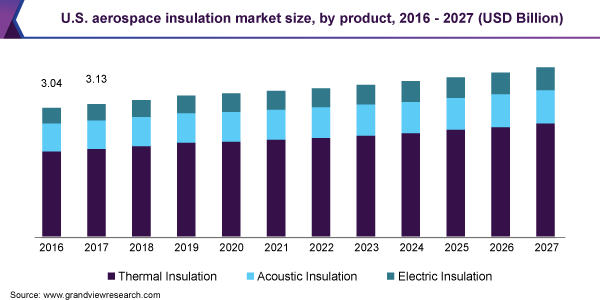 The selection of the materials used for insulation of commercial, military, business, and general aviation aircraft, as well as spacecraft, follow the regulations placed by the Federal Aviation Administration (FAA), Original Equipment Manufacturer (OEM), and Boeing. Noise reduction, durability, fire resistance, static resistance, and cleanability are some of the parameters considered while selecting the material.

The pandemic situation has severely impacted the aerospace and aviation industry. With restrictions on international as well as domestic passenger movement, the airlines are operating on minimum profit, which may affect the aircraft orders. This is expected to have an adverse effect on market growth.

Ceramic materials accounted for the largest market share of 48.6% in 2019 and are expected to witness the fastest growth over the forecast period. This is attributed to their beneficial properties, such as extreme heat resistance, corrosion resistance, and lightweight. These materials are widely used for a number of aerospace applications, including exhaust systems and engines, thermal protection shields, brakes, bearings, seals, and other wear-resistant components.

Foamed plastics are widely used in the insulation of commercial aircraft for enhanced passenger safety, greater acoustic comfort, improved fuel efficiency, and easier installation and maintenance. The material is preferred owing to its excellent thermal and acoustic capability, fire resistance, and lightweight.

Fiberglass is expected to expand at a CAGR of 4.3% from 2020 to 2027. This can be attributed to the optimum thermal and acoustical insulating performance of the material for applications up to 450 °F. It is preferably used for the insulation of fuselage wall cavities for commercial aircraft.

The commercial segment including passenger and Freightliner aircraft is one of the major application areas of insulation in the aerospace industry. The segment accounted for the largest share of over 55.0% in 2019 and is anticipated to witness the fastest growth over the forecast period. The utilization of insulation in aircraft aids in thermal and acoustic insulation, which further improves passenger comfort and experience. In addition, insulation materials in freight liners are primarily installed to improve the thermal insulation, thus protecting the contents during logistics. 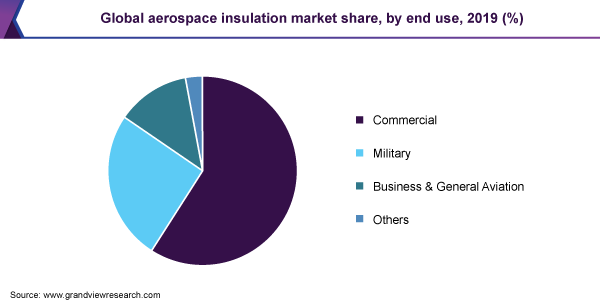 The military segment accounted for a significant share of the market in 2019 owing to the increasing use of aerospace insulation for thermal damping in the engine bay. Furthermore, military aircraft including cargo and jets use insulation materials, such as blankets, lining, firewalls, and seals, extensively for electrical insulation and fire barrier, thus promoting its use over the forecast period.

The business and general aviation segment is expected to witness significant growth over the forecast period owing to the growing use of aerospace insulation in the fuselage for acoustic as well as anti-vibration properties. Furthermore, the use of insulation significantly improves passenger comfort, especially in the business aircraft segment.

Acoustic insulation is used to reduce the noise and vibrations generated by engines and aerodynamics in order to provide comfort inside the flight deck and passenger cabin. Though the type of acoustic insulation varies from aircraft to aircraft, fiberglass being a highly efficient acoustic attenuator is often preferred.

The aerostructure segment dominated the market with a share of 59.0% in 2019 and is expected to maintain its lead over the forecast period. The segment comprises fuselage, door pairings, wings, and airframe, which require insulation in maintaining a comfortable temperature in the cabin interior and flight deck.

Engine insulation is expected to expand at the fastest CAGR of 4.6% from 2020 to 2027 as engines are one of the most significant parts of an aircraft, which provide the necessary thrust to move an aircraft through the air. The engine and propulsion system comprises a propeller system, turbines, bearing bushes, and nacelles.

The engine segment is expected to exhibit significant demand for thermal insulation as it is vital to maintain the temperature and prevent overheating of the engine for its smooth functioning. In addition, the Federal Aviation Administration (FAA) has imposed regulations on the use of acoustic insulation to reduce the noise generated by engines, which is expected to boost the segment growth.

North America held the largest share of 40.74% in 2019. The region is expected to witness a growing demand for fuel-efficient aircraft in the next few years on account of rising fuel prices. The high replacement rate mainly for regional aircraft is fueling the growth of the matured aerospace industry, which, in turn, is expected to increase the demand for aircraft insulation over the forecast period.

Europe is a significant regional market owing to the presence of major manufacturers involved in commercial, military, and business jets. The growing use of aerospace insulation in Germany, France, the U.K., and other European countries in airplane manufacturing is expected to enhance the growth of the regional market over the forecast period.

Asia Pacific is expected to expand at the fastest CAGR of 6.4% from 2020 to 2027. Emerging economies in the Asia Pacific, including China, India, and Japan, are largely fueling the growth of the aerospace industry due to the emergence of the aircraft manufacturing industry in the region, which, in turn, is expected to propel the demand for aerospace insulation over the forecast period.

Brazil is one of the strongest competitors in aircraft manufacturing in the global market. Embraer is one of the leading aircraft manufacturers located in Brazil and is expected to fuel the demand in Central and South America. The rising number of air passengers in the region, coupled with new orders to support the same, is expected to fuel the demand for aerospace insulation over the projected period.

The market has been characterized by intense competition due to the presence of established players that hold the majority of the market share owing to their wider geographical reach and vast product portfolio. These companies develop a strong business model in order to adapt to market volatility and any technological and geographical change. Some of the prominent players in the global aerospace insulation market include:

This report forecasts revenue growth at the global, regional, and country levels and provides an analysis on the latest industry trends and opportunities in each of the sub-segments from 2016 to 2027. For the purpose of this study, Grand View Research has segmented the global aerospace insulation market report on the basis of material, product, application, end use, and region:

How big is the aerospace insulation market?

What is the aerospace insulation market growth?

Which segment accounted for the largest aerospace insulation market share?

Who are the key players in the aerospace insulation market?

What are the factors driving the aerospace insulation market?

b. The key factors that are driving the aerospace insulation market include growing passenger & freight traffic across the globe, a rise in MRO activities, and increase in rate of fleet replacement.