The Africa livestock surface disinfectant market size was valued at USD 65.0 million in 2018 and is likely to expand at a CAGR of 6.3% over the forecast period. Increasing awareness among farmers concerning animal diseases and growing demand for stockyard disinfectants are projected to drive the market growth in Africa. An increasing number of animal farms and awareness regarding animal cleanliness in the region are projected to drive the demand for livestock surface disinfectants in the years to come. 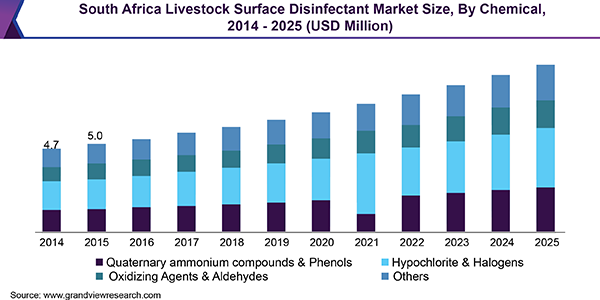 The market is expected to witness a surge in growth owing to increasing disposable income, rapid urbanization, and increasing livestock production in Africa. This can be attributed to the dependency of the region’s economy on the agricultural sector including crops and livestock. Rising adoption of new technologies among manufacturers for the production of livestock surface disinfectants with enhanced efficiency is driving the market toward expansion. These factors are expected to have a positive impact on the market in Africa for livestock surface disinfectant.

High living standards and a significant focus of consumers on hygiene and preventive healthcare are projected to boost the demand for livestock surface disinfectants in the African market. Furthermore, rising demand for meat and meat byproducts has prompted farmers to adopt different farming practices such as intensive farming. This is expected to create a high-disease prone environment in the farms, which, in turn, is expected to drive the demand for surface disinfectants in the animal farming sector in Africa.

Hypochlorite is the most preferred chlorine disinfectant available in both solid (calcium hypochlorite and sodium dichloroisocyanurate) and liquid (sodium hypochlorite) forms. Hypochlorite can eliminate both non-enveloped and enveloped viruses when applied to inaccurate dilutions at the right contact time.

Stabilized hydrogen peroxides can be blended with quaternary ammonia or iodophors. They can also be blended in high concentrations with peracetic acid for use as a high-level disinfectant. Vaporized hydrogen peroxide is an effective oxidizing agent used for the elimination of animal viruses such as Newcastle disease and avian influenza from surfaces and equipment.

Liquid surface disinfectants are effective against several types of microorganisms resulting in enteric and respiratory infections and wounds. These products are used in daily-routine hygiene procedures by farmers in the African market owing to their persistent residual activity, which considerably regulates the transmission of infection.

Sodium hypochlorite is one of the prominent liquid surface disinfectants used in the livestock industry. It is an aqueous solution of 4% to 6% sodium hypochlorite, which is readily available as bleach and unaffected by water hardness. It has a wide spectrum of antimicrobial activity, is fast-acting and inexpensive, and has a low occurrence of toxicity. This type of liquid surface disinfectant is used to eliminate the risk of several diseases and treat livestock infections.

Bleaching powder is used for the sterilization of water supplies and the disinfection of stockyards or animal houses during the outbreak of disease. Quaternary ammonium compounds are used to disinfect dairy utensils, udder, and towels for wiping udders and milker’s hands. Virkon is the most common powder disinfectant used in the African market that provides safety against different types of microorganisms.

Cattle are prone to infection after they come in contact with other infected species, due to transportation stress, and a change in the stockyard. Calf and beef units are prone to suffer from several diseases owing to the lack of disinfection and build-up of infectious agents. To overcome these problems, downtime is planned throughout the year for disinfection and cleaning. Isopropyl alcohol and hydrogen peroxide are used for cleaning abrasions and minor cuts on the body of cattle, especially bovine.

African pigs are increasingly becoming prone to African swine fever, influenza, swine vesicular disease, classical swine fever, and porcine respiratory and reproductive syndrome (PRRS). Prominent surface disinfectants used against these diseases include Virkon, glutaraldehyde, detergents, alkalis, and hypochlorites. The outburst of such diseases also hurts the profitability and performance of the poultry industry. To eliminate these diseases, livestock surface disinfectants such as glutaraldehyde and quaternary ammonium compound are primarily used in Africa. 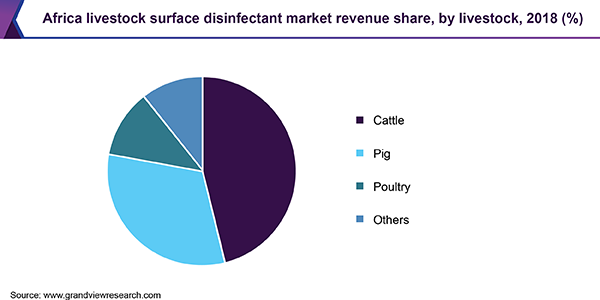 Poultry farming is a prominent business in Africa owing to the shift in consumer trends from eating a vegetarian diet to an intake of protein-rich food. The African poultry market, especially in North Africa, is plagued with diseases such as Newcastle Disease and Avian Influenza. The outbreak of influenza and Newcastle can be dangerous to several other farms located in proximity.

As per FAO, Ethiopia has the largest livestock population in Africa owing to favorable climatic conditions for the production of different types of livestock. Cattle, goat, and sheep are considered to be the most important species produced in the country. The outbreak of several diseases is the most important factor impacting livestock production in the country. In 2018, Ethiopia emerged as the largest market for livestock surface disinfectant. The market growth in the country can be attributed to increasing cattle and swine farming. In Africa, the growing presence of livestock surface disinfectant manufacturers and widespread African swine fever has led to an increase in product demand.

In May 2019, South Africa reported an outbreak of African swine fever in pigs. The fever is highly contagious and causes hemorrhagic fever along with a high mortality rate in pigs. This resulted in a ban on the export of cattle and pig meat to neighboring countries by the South African government. Decreased livestock production owing to disease outbreak is expected to drive the demand for livestock surface disinfectants in the South African market over the forecast period.

The Africa livestock surface disinfectant market is consolidated with the presence of a few players and high demand from end-users. Key market players are concentrating on utilizing advanced technologies and adopting new marketing strategies to strengthen their base to generate more revenue soon.

Companies such as Lanxess AG, Neogen Corporation, and Stepan Company have a very diverse product portfolio. These companies have established brands, such as Virkon by Lanxess AG and BioSentry by Neogen Corporation, and a prominent presence in the market. Companies are heavily investing in R&D activities to meet various norms and specifications. Key players in the regional market including Lanxess AG; Solvay S.A.; and DuPont de Nemours, Inc. are focusing on backward integration and producing their raw materials to maintain the quality of the final product.

This report forecasts revenue and volume growth at the country levels and provides an analysis of the latest industry trends in each of the sub-segments from 2014 to 2025. For this study, Grand View Research has segmented the Africa livestock surface disinfectant market report based on chemical, form, livestock, and country:

How big is the africa livestock surface disinfectant market?

b. The Africa livestock surface disinfectant market size was estimated at USD 68.9 million in 2019 and is expected to reach USD 73.5 million in 2020.

What is the africa livestock surface disinfectant market growth?

b. Ethiopia dominated the Africa livestock surface disinfectant market with a share of 32.0% in 2019. This is attributable to Ethiopian government initiatives for increasing livestock farming and meat exports.

Who are the key players in africa livestock surface disinfectant market?

What are the factors driving the africa livestock surface disinfectant market?

b. Key factors that are driving the market growth include prevalence of stockyard infections and rising demand for bio based surface disinfectants.