The global agricultural films and bonding market size was USD 7.60 billion in 2015. Rising demand for food along with the increasing requirements for ideal agricultural productivity is expected to drive market growth. Factors such as declining arable land and demand for high-quality crops are likely to positively impact the growth. 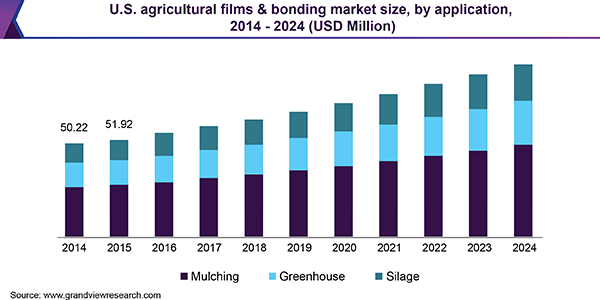 Various innovations in the market including fluorescent, UV, and NIR blocking, screens and ultra-thermic screens are anticipated to drive the agricultural films and bonding market growth over the next eight years. Silage screens are mainly used on pasture lands to store animal fodder as they retain moisture and lend ease of handling and transportation. However, the disposal and environmental impact of these films are expected to hamper the growth in the forthcoming years.

Twine is widely used in vegetable packing, fruit packing, and bales. It is strong, durable, and can be used as ropes. Netting is used for hail protection, overhead crop netting, insect netting, citrus netting, and baling. Netting protects crops from weather risks and also lessens the effects of light.

Mulching was the largest application of agricultural films and accounted for 45.4% of the total market share in 2015. The consumption of film type varies according to different climatic conditions, crop patterns, and demand for crops. Greenhouse films are predominantly used in Asia and the Middle East due to the increasing demand for ornamental crops. Silage films are mostly consumed in South America and Europe due to the presence of high pasture areas.

Asia Pacific led the global demand and is expected to expand at a CAGR of 5.4% over the forecast period. Increasing food demand coupled with large exports to other countries has led to Asia Pacific becoming the largest agricultural film and bonding consumer globally. Additionally, increasing production capacities for Polyethylene (PE), which is the major raw material for manufacturing films, has furthered market growth.

Regulations regarding the use and recycling of plastic are being followed in regions like Europe, North America, and Asia, thus hampering the growth of the agricultural films market. The introduction of biodegradable and bio-based polymer films is expected to create lucrative opportunities for market participants over the next few years.

The film was the major product segment and accounted for over 75% of the overall market in 2015. This segment is anticipated to witness the fastest growth over the forecast period on account of the growing requirements for high-quality crops.

Twine accounted for over 10% of the global market share in 2015. Baling twines are used for stacking and binding products. They are also applicable in packaging crates for vegetables and fruits suitable for transport.

Polypropylene (PP) finds a wide range of applications in agriculture and farming. They are used for manufacturing netting and twines for packaging and protecting the products from damage. PP twines are used for binding and corrugated PP is used for irrigational applications. PP demand in twine accounted for over 70% of the market share in 2015.

Low-density Polyethylene (LDPE) accounted for over 22% of the film market share in 2015 and is expected to witness high demand from Asia Pacific, particularly China. These are used in areas with harsh climatic conditions and limited water supply.

High-density Polyethylene (HDPE) accounted for over 50% of the netting market share in 2015. This non-toxic material can be used in direct contact with plants. HDPE is completely recyclable, convertible, waterproof, and durable. UV radiation agents are added in the correct quantity to the raw material to enhance mechanical characteristics.

Global film application in mulching is projected to reach USD 5,787.2 million by 2024. Mulching films are most widely used in China and the Rest of Asia due to large areas of arable land and high agricultural activities. 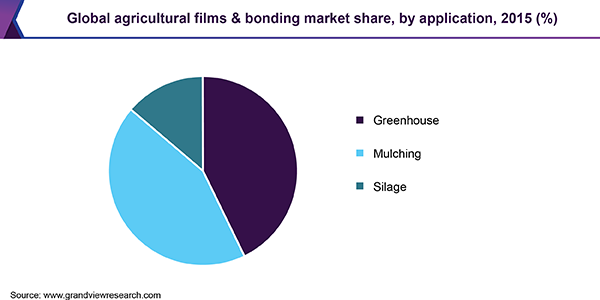 Greenhouse coverings are widely used in horticulture and floriculture projects in Europe and the Middle East to mitigate the effects of harsh climatic conditions here and to meet the growing demand for products from such projects.

Shading was the leading application segment and accounted for over 40% of the netting market in 2015. Shading nets are also used to prolong or delay the harvesting period in sunny areas, particularly in European economies such as Italy.

Asia Pacific led the global market and accounted for over 70% of global demand in 2015. Over 80% of the farmers in the region use mulch. Favorable support from the government for the R&D of protected agriculture practices is expected to have a positive impact on the growth.

Europe is anticipated to witness stagnant growth over the next eight years owing to stringent environmental regulations regarding film disposal and manufacturing. However, shifting consumer focus towards biodegradable materials is anticipated to further fuel regional growth.