The global agricultural fumigants market size was estimated at USD 938.61 million in 2019. It is anticipated to expand at a compound annual growth rate (CAGR) of 5.0% from 2020 to 2025. Evolving requirements pertaining to crop protection techniques and post-harvest practices are driving the growth.

Phosphine is the most dominant product, which is extensively used in closed warehouses to protect the harvested crops from insects and other pest attacks. They have the ability to diffuse easily and penetrate into bulks of stored grains as well as actively perform fumigation activity for more than a week, post-application. 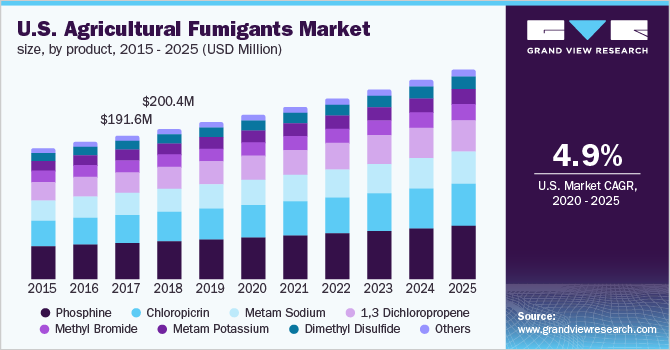 Agricultural soil fumigants fall under the restricted use category of pesticides and this directly implies that all the products can only be used by authorized applicators across the globe. There are numerous soil fumigating techniques, such as drip tubing, non-tarped bedded, tarped broadcast application, and more, which differ based on types of soil, pests, and crops.

A liquid variant is the most dominant form and is anticipated to witness the fastest growth compared to its counterparts. This form is typically injected into the soil, which transforms into a protective gas layer around the roots to prevent them from degrading due to pest attacks. There are multiple regulations laid down globally in terms of gaseous variants because they are toxic to human health and are simultaneously hazardous to the environment.

The post-harvest phase for a large number of cereals and grains has been gaining importance as the losses resulting from improper storage have been witnessing a significant rise. According to a report submitted by the World Health Organization, it has been observed that over one-third of food is wasted or lost due to improper storage.

Reducing the aforementioned losses may lower the pressure on the agriculture industry to meet the dietary requirements of a growing population. Moreover, it is also expected to reduce the exploitation of other sustainable natural resources. The problem is more pronounced in developing countries where the access to proper storage information for farmers is limited, which results in increased crop losses in the post-harvest stage.

Fumigants that belong to the family of insecticides have been approved for the storage of food grains by the World Health Organization. The organization also carries out annual reviews to assess the toxicity of the existing products as well as the new products introduced in the market. The post-harvest phase, including storage and transportation, involves the use of fumigants for reducing storage losses. Fumigation provides a wide range of advantages such as a reduction in microbial activity as well as disinfestation of the area where food grains are stored or being transported.

The increased demand for infrastructure has resulted in encroachment of agricultural lands thus adding to the problem of food supply. The reduction in agricultural lands has exerted increased pressure on the existing natural resources. Earlier, there were two options to meet the growing food demand - increase the area under cultivation or boost the agricultural productivity. Although both these options seem feasible, the nature of the solution varies depending on the location of cultivation. Tackling the problem by increasing agricultural productivity is being perceived as the way to go ahead. In developing countries, educational programs are being conducted to keep farmers informed about the various practices globally that aid productivity. Fumigants are also used to prevent losses due to infestation.

Fumigants that are currently used in the market come with several warning signs. The fumigation technique involves spraying fumigants in an enclosure and keeping it closed for a minimum period of four hours. However, fumigants to an extent seep into the atmosphere and result in airborne diseases. Initial exposure can have instant side effects such as nausea, coughing, secretion of saliva, and vomiting. This is likely to act as a restraining factor of the market.

Soil fumigation is a technique of pre-plant treatment of soil using chemicals to control crop infections caused by rodents, nematodes, weed, and insects among others. All fumigants that are applied to plants are phytotoxic; thus, they should dissipate from the soil before seeding or transplanting to avoid crop damage. The application of these products to soil largely depends on a broad spectrum of factors including soil type, crop type and texture, airspace, local moisture content, temperature, and dosage among others.

Other applications majorly include warehouses and transport ships. The type of warehouse and storage fumigation depends upon the duration of storage, covering of commodities, and type of room. The majority of the companies prefer methyl bromide fumigation, wherein the stored grains are supposed to be shipped in a short span of time.

On the basis of form, the agricultural fumigants market is trifurcated into solid, liquid, and gas. The solid form includes the usage of powder, pellets, and tablets to control insects and other pests. It is the safest of the three forms owing to its ease of sprinkling and lower chances of exposure to gases upon application. It is also considered comparatively safer for the environment in most regions across the globe.

The liquid form includes soluble products used to eliminate molds, insects, and pests among others. They are usually sprayed over the desired land area using typical sprayers. The disbursement volume of solvent is at the discretion of the applicator. This form of fumigation is usually considered the safest when it is performed in either enclosed chambers or completely open outdoor areas.

The gaseous form is typically applied in enclosed chambers, which also have a gas-proof covering to avoid leakage of gas into the environment. It is also known as space fumigation and is carried out with precaution to restrict gaseous dispersion into the environment as they contain substances, such as methyl bromide that cause ozone depletion. These effectively eliminate insects, nematodes, termites, and weeds among others. 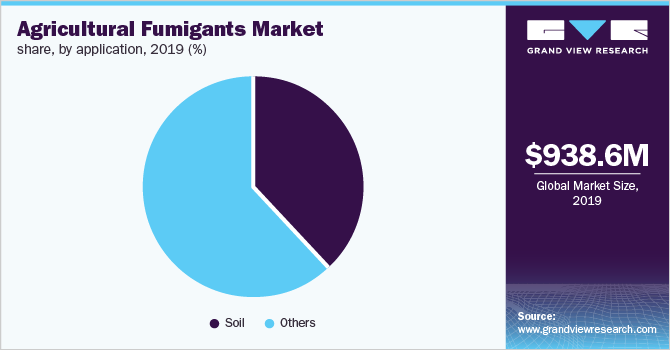 Phosphine is the fastest growing product globally regardless of its potential to cause human health hazards. This is toxic as well as flammable and should be applied only by authorized applicators. Phosphine application should be done for a long duration and in closed and compact houses for maximum results. This practice should be done based on the area to be treated rather than the amount of commodity and is strictly banned for usage in spaces, which are not absolutely sealed, as they have the potential to cause serious damage to animals and humans in the vicinity.

North America is one of the largest agricultural hubs across the globe. Among the diverse crops grown in the region, FAO stated that corn production was observed to be leading the market with an output of over 354 million tons in 2013, followed by soybean and dairy products marked at 89 million tons and 91 million tons respectively in the same year. Multiple conservancies in North America, such as The Nature Conservancy, are working with farmers to scientifically derive strategies for boosting the growth of agricultural products by reducing nutrient run-off by around 20% and simultaneously educating farmers about sustainable grazing methods.

The U.S. has over 2.02 million agricultural lands as reported by the American Farm Bureau Foundation. The demand for methyl bromide in the country is generated majorly from the cultivation of corn, strawberries, and tomatoes. The country is also one of the largest global producers as well as exporters of corn. However, on account of the stringent regulations established in the recent past by multiple agencies such as the U.S. Environmental Protection Agency, farmers and other associations involved in the agriculture business are looking for feasible alternatives to methyl bromide and chloropicrin. These chemicals are widely injected into the soil during strawberry production, as their residual leftovers are minimal. Some alternatives including phosphine, carbonyl sulfide, and sulfuryl fluoride have been put to test in the U.S. These alternatives cause less environmental deterioration as compared to methyl bromide. 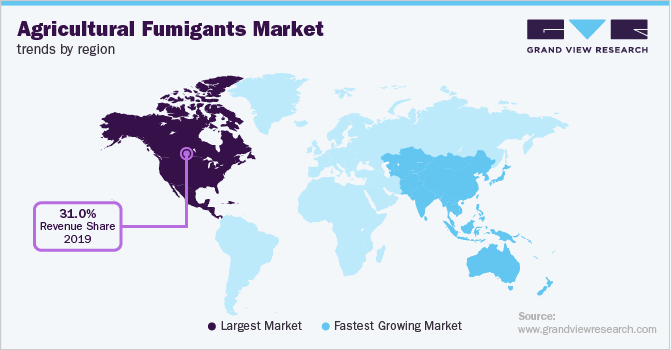 The Asia Pacific region has vast opportunities for the growth of the fumigants industry given the presence of multiple agriculture-based economies in the region. The demand for rice, maize, and wheat has quadrupled in the past decade, thereby leading to increased consumption of various fertilizers, fumigants, and pesticides for securing the cultivated crops and safely storing the produce in warehouses. Parallelly, this surge in demand for agricultural chemicals has led to increased greenhouse emissions in the region. Growing awareness regarding the continuous environmental degradation caused by the aforementioned chemicals led to the establishment of stringent regulations laid down by the Asia Pacific Department of Food and Agriculture Organization.

The agriculture industry in China has always been low as compared to the rest of the Asian countries due to the low availability of arable land, continuous land degradation, and rapid urbanization, which results in increased demand for land area. However, as of 2018, China has remarkably improved the scenario of its farm output and value-added agricultural products. China has taken environmental threats seriously over the past decade and has banned the use of multiple pesticides and fumigants. Ethylene dibromide was banned from use in China in 1994, while the use of ethylene dichloride and ethylene oxide was banned in 2001.

North America and the Asia Pacific are the major regional markets. The market is majorly dependent on the area under cultivation and the regulations in various countries. The rising population in the Asia Pacific is expected to boost demand for these products as they have an important role to play in improving agriculture productivity. The presence of manufacturers in India and China is expected to benefit the growth of the industry across the Asia Pacific.

Suppliers are a vital component in the value chain as they help in bridging the gap for manufacturers and simultaneously cut out on extra expenditure. The suppliers help increase the reach of these materials as they act as an intermediate for farmers in remote areas for the product supplies. The major focus of manufacturers lies in increasing their product reach as it helps to strengthen their regional dominance.

This report forecasts revenue growth at a global, regional, and country-level and provides an analysis of the latest industry trends in each of the sub-segments from 2014 to 2025. For the purpose of this study, Grand View Research has segmented the global agricultural fumigants market report on the basis of product, application, form, and region. 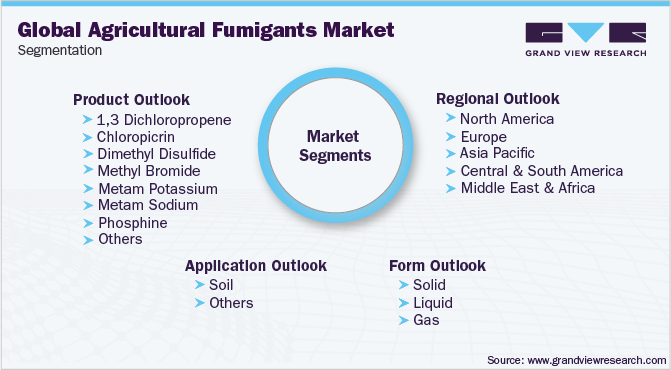