The global air conditioning systems market size was USD 102.02 billion in 2018 and is expected to register a CAGR of 9.9% from 2019 to 2025. Thermal environmental factors such as humidity, temperature, and air pressure are key to maintaining healthy indoor air. As these factors keep changing throughout the year, adapting with them can often be a challenge, especially when dealing with closed spaces with inadequate ventilation. Air conditioners are highly preferred in residential as well as commercial areas to control these factors. 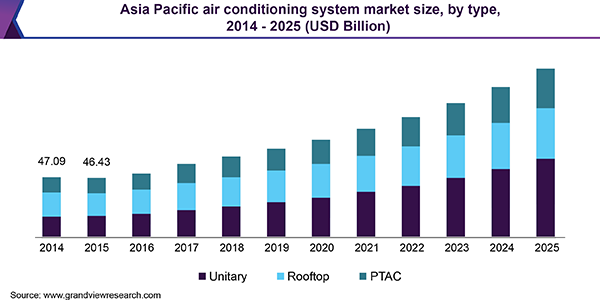 The rising number of hospitals, hotels, individual clinics, auditoriums, and multiplexes across the globe is anticipated to accelerate the market growth for air conditioning soon. For instance, the government of Oman is investing in various construction projects, leading to an increased demand for air conditioning systems. For instance, the multi-billion dollar Omagine Pearl Project of 2017, which is slated to feature seven pearl-shaped buildings hosting hotels, amphitheaters, malls, and other commercial and residential buildings in Seeb, Oman, is likely to result in an increased demand for air conditioning systems.

The rising population, which is anticipated to positively influence the construction industry, is also creating an increased demand for air conditioning systems. For instance, the rising population in Gulf countries is anticipated to contribute significantly to construction spending in GCC countries. The regional population is estimated to reach over 600 million by 2050 from 350 million in 2015. This is likely to propel growth in construction activities in the infrastructure and building sector, particularly education, housing, and healthcare infrastructure, to support communities.

Governments of various countries are focusing on efficient air conditioning. For instance, in February 2019, Energy Efficiency Services Limited (EESL), a joint venture of four Public Sector Enterprises under the administrative control of the Ministry of Power, Government of India, announced the launch of Super-Efficient Air Conditioning program. The program is aimed at promoting the use of energy-efficient technologies and bring about a reduction in energy consumption. Through this program, the Ministry of Power in India also aims to address India’s Hydrochlorofluro carbons Phase-out Management Plan and Cooling Action Plan by 2032.

The type segment has been segregated into unitary, rooftop, and Packaged Terminal Air Conditioner (PTAC). The unitary segment held the largest market share in 2018. Unitary air conditioners are predominantly used in households. Therefore, the ever-increasing growth of the residential segment is likely to continue to drive the demand for unitary air conditioners globally.

The rooftop segment held over 30% of the overall market in 2018 and is expected to register a CAGR exceeding 5.0% over the forecast period. Benefits such as cost-effectiveness, adaptability across various applications, and increased indoor air quality are expected to positively impact the growth of the segment. Furthermore, the rising establishment of malls and other commercial buildings across the globe is also expected to fuel the demand for rooftop air conditioning systems.

The technology segment has been segregated into inverter and non-inverter. The inverter segment held the largest market share in 2018 and is expected to grow at a significant pace over the forecast period. The rising awareness regarding the need to adopt energy-efficient air conditioning systems and the ability of inverter air conditioners to replace conventional air conditioners is expected to positively impact the growth prospects of the segment. Additionally, various benefits such as cost-effectiveness, ability to operate at variable speeds, and ability to adjust tonnage based on heat load are also favoring the growth prospects of the segment.

The non-inverter segment is expected to witness moderate growth as compared to its counterpart. This can be attributed to various factors such as high energy consumption, fluctuating frequencies, and less lifespan. However, the low cost of these air conditioning systems could help the segment improve its hold on the market.

Based on end-use, the air conditioning system market has been segmented into residential, commercial, and industrial segments. The residential segment is anticipated to exceed USD 100 billion by 2025. Residential air conditioner systems are smaller and simpler compared to their commercial and industrial counterparts. These systems are used in small places such as homes, small restaurants, and small stores.

Changing government regulations to ban the usage of refrigerants such as R-22 to minimize the heat emission is estimated to create the need for replacing conventional air conditioners in residential as well as commercial areas. The rapidly growing replacement and refurbishment activities in the residential sector are anticipated to elevate the adoption of air conditioning systems. 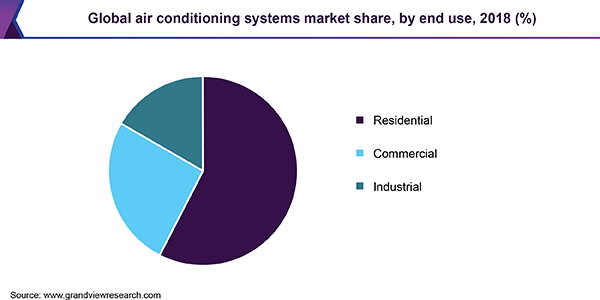 The Asia Pacific is anticipated to emerge as the fastest-growing regional market. The region held a significant share of over 50% in 2018 in terms of revenue and is anticipated to rise to a valuation of USD 130.0 billion by 2025. This is attributed to the rising usage of air conditioners in emerging countries such as China and India. Additionally, the market is expected to witness intense competition among players in China owing to the availability of low-priced air conditioning systems.

The North American market accounted for over 15% of the overall revenue share of the market in 2018. This growth is attributed to the early adoption of air conditioning systems in the region. Additionally, rising promotional activities from the government to increase the adoption of energy-efficient air conditioning systems to reduce energy consumption is also expected to fuel the growth of the regional market.

The competitive landscape of the market is highly consolidated and is characterized by high competition. Some of the leading players in the market are DAIKIN INDUSTRIES, LTD., Carrier Corporation, Haier Inc., Electrolux, Ingersoll-Rand plc, and Mitsubishi Electric Corporation. These market players particularly focus on entering into mergers & acquisitions and joint ventures/collaborations to enhance their market presence.

For instance, in January 2018, Ingersoll-Rand plc announced that it had acquired ICS Group Holdings Limited. This made ICS Group Holdings Limited a part of Ingersoll-Rand plc’s commercial Heating, Ventilation, and Air Conditioning (HVAC) business. The acquisition enabled the former to strengthen its global presence and serve a broad range of customers in the European market. Similarly, in August 2015, Ingersoll-Rand plc acquired the Air Center of Mississippi, a distributor of compressed air equipment, parts, and services for manufacturing and industrial applications, thereby offering a more direct presence in the core industrial market.

This report forecasts revenue and volume growth at the global, regional, and country levels and provides an analysis of the latest industry trends in each of the sub-segments from 2014 to 2025. For this study, Grand View Research has segmented the global air conditioning systems market report based on type, technology, end-use, and region: