Increased aircraft movement and passenger & freight traffic have resulted in the construction of new airports and overhaul of the existing ones to modernize them and increase their capacity. Airport expansion and modernization requires the deployment of air traffic control equipment and its sub-systems, which is expected to boost market growth. Replacement of obsolete air traffic control systems is cumbersome as an interruption of air traffic control is not feasible. 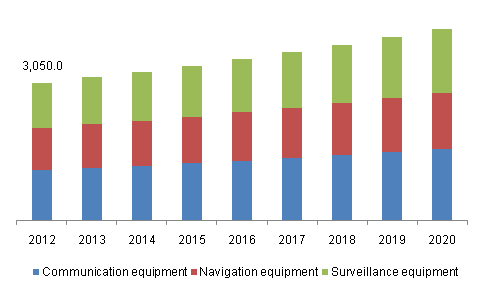 Europe and North America accounted for a considerable revenue share of the air traffic control equipment market in 2013 due to the increased government efforts for securing air traffic and aircraft. Federal Aviation Administration (FAA), the national aviation authority of the U.S., has collaborated with unions and the aviation industry in the transitioning of air traffic control facilities from Common Automated Radar Terminal System (CARTS) to the Standard Automation Replacement System (STARS). Over 90 new facilities are expected to be deployed from 2014 to 2018 for this purpose. Asia-Pacific is expected to show high growth potential on account of the growing demand for effective and efficient infrastructure.

Aquila, a joint venture between NATS and Thales, has been awarded a USD 2.35 billion contract to modernize and operate air traffic control of the UK’s military aircraft at bases around the world. In November 2013, Advanced Navigation and Positioning Corporation (ANPC) completed a demonstration flight campaign using their newly installed Transponder Landing System (TLS) at Manaus Brazil. The system was installed in a temporary configuration for demonstrating the quick deployment capability, which was completed in approximately two and a half days. Due to low failure tolerance levels, leading players have emphasized heavily on enhancing the reliability of these systems. Additionally, collision avoidance is expected to receive increased attention to address the growing volume of air traffic. Navigation and landing aids are periodically upgraded for maintaining safety and improving efficiency with which airways and airports are utilized. Key participants in the air traffic control equipment market include Thales Group and Raytheon Company. Searidge Technologies Inc., Northrop Grumman Corp., NavAero Inc., Lockheed Martin Corp., Indra Sistemas SA, Harris Corp., Cobham Plc, and BAE Systems Plc.