The global almond milk market size was valued at USD 5.2 billion in 2018 and is expected to expand at a CAGR of 14.3% from 2019 to 2025. Almond milk is a plant-based dairy alternative known to be rich in vitamin E and omega-3 fatty acids. An increasing number of health conscious consumers, coupled with rising inclination towards plant based products, is anticipated to drive the market over the forecast period. 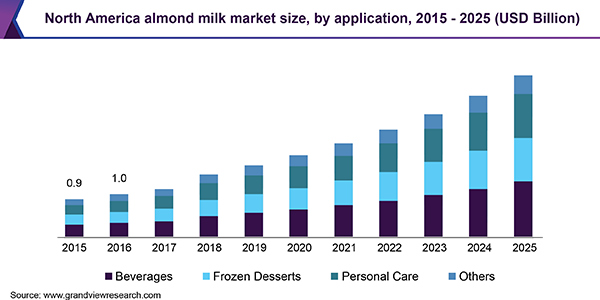 Rising cases of lactose intolerance and hypercholesterolemia are projected to fuel the market demand over the anticipated years. The product is devoid of cholesterol and lactose, thus making it a popular choice, especially among vegan consumers. Preference for vegan diet has influenced consumers to choose substitutes for cow milk. Plant-based milk alternatives are an emerging trend that can serve as an economical alternative for the developing countries and in places where animal milk supply is inadequate.

Almond milk has varied applications such as beverages, frozen desserts, and personal care products and is used as a major ingredient for manufacturing chocolates, cream liquor, and bakery products. Together with protein, the product is a rich source of zinc that helps to prevent hair graying and thus keeps the skin free from blemishes. Several cosmetic manufacturers use the formulation to produce face creams and hair care products, thereby propelling the demand for almond milk in the industry.

The growing acceptance of dairy alternatives amongst vegan consumers is a major factor benefiting market expansion. Aesthetic benefits associated with almond milk, along with its other properties such as low-calorie quotient and high protein volume, make it befitting as a dietary supplement for consumers of all ages. For instance, Raw introduced its 100% cold-pressed almond milk as a substitute for the other dairy shakes to promote the brand in the plant-milk segment for its vegan consumers.

Rising incidence of lactose intolerance and diabetes in countries, such as China, Japan, Germany, and the U.S., where a change in lifestyle and high exposure to pollutants are highly affecting the major population, is a potential factor propelling the product demand. The beverages and organic cosmetics markets are likely to witness strong growth over the next few years due to rising consumer expectations about the benefits of almond milk. Companies such as Daiya Foods Inc.; Whitewave Foods; Blue Diamond Growers; and Galaxy Nutritional Foods, Inc. are taking initiatives to thrive in the market by introducing a variety of cold-pressed beverages and frozen desserts on a global scale.

Almond milk is prominently used in the APAC countries, especially India and China, and hence the product is likely to witness favorable growth over the forecast period in this region. Vast application scope of the product in the food and beverage industry has resulted in an inflated demand from countries, especially China and Japan. The growth of the beverages application segment is attributed to growing vegan population in the APAC region. For instance, as per a report published by the National Institutes of Health (NIH), majority of the lactose-intolerant population belongs to Eastern Asia, thus offering a wider scope for the almond milk manufacturers to tap such regions. Beverages accounted for 31.8% share of the global revenue in 2018 due to wider application scope in the industry.

The personal care application segment is anticipated to expand at a CAGR of 14.6% over the forecast period due to the unique anti-aging properties of the product and high proportion of vitamin B6, vitamin C, vitamin E, and zinc in its formulation, which has been used in skin repair creams and lotions. For instance, Bodyshop is known to manufacture a special range of body butter, shampoos, and conditioners for its consumers worldwide, exploring the demand for almond milk in this segment.

Other applications in the market include bakery, cream liquor, and chocolates. Milk chocolate manufacturers often use almond milk as the main ingredient for manufacturing fruit and nut chocolates. For instance, Toblerone, a Swiss chocolate brand, make use of almond milk to manufacture the products for its consumers.

Surge in online apps has significantly impacted the supply chain of the market. For instance, Bigbasket offers a variety of almond milk beverages and other products through an online delivery option apart from the offline stores in India, thereby driving the online channel segment. Due to increase in the number of market players, convenience stores are also keeping a large variety of almond milk products for the consumer’s convenience during regular grocery shopping. 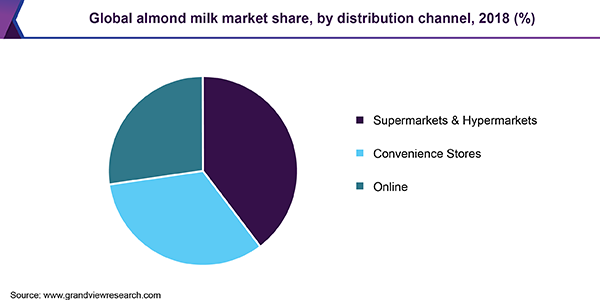 In terms of revenue, hypermarkets and supermarkets held the largest market share of 39.3% in 2018. The online segment is anticipated to expand at a CAGR of 15.1% over the forecast period. The major reason for preferring online distribution mode is the ease of payment with respect to ordering the product. A number of offers and discounts are available on various apps for the concerned consumers.

Leading manufacturers in U.S. such as Hain Celestial Group and Blue Diamond Growers have started producing a wide variety of packaged almond milk in the beverage segment for consumers across the world. Modern product launches by Raw and Sofit have certainly added a trend of the vegan milk amongst consumers in the APAC region, thereby augmenting the consumption of almond milk in the region. Other applications popular in this region are personal care products, especially hand creams and conditioners.

The frozen dessert market in the U.S. is one of the significant sectors boosting the market growth in the region. In 2018, the sector accounted for 26.8% share in the U.S. The market is expected to grow over the forecast period due to rising per capita income and change in eating patterns across various MEA countries. Growing environmental concerns among consumers have resulted in the adoption of almond milk in daily routine.

Companies like Danone utilize almond milk to manufacture beverages like flavored milk and shakes, along with frozen desserts like almond and nuts ice-cream and frozen yogurt. Confectionery manufacturers utilize almond milk to produce almond-flavored baked products such as almond bread, cookies, and cakes, which are a thing these days amongst the masses. For instance, Baileys used the product to launch Almande Irish Cream Liqueur during the festive season for the vegan consumers.

This report forecasts revenue growth at the global, regional, and country levels and provides an analysis of the latest industry trends in each of the sub-segments from 2015 to 2025. For the purpose of this study, Grand View Research has segmented the global almond milk market report on the basis of application, distribution channel, and region:

How big is the almond milk market?

What is the almond milk market growth?

Which segment accounted for the largest almond milk market share?

b. Asia Pacific dominated the almond milk market with a share of 30.9% in 2019. This is attributable to rising incidences of lactose intolerance and diabetes across consumers in countries such as China, India and Japan.

Who are the key players in almond milk market?

What are the factors driving the almond milk market?

b. Key factors that are driving the market growth include rising incidences of lactose intolerance and hypercholesterolemia and shifting consumer preferences towards vegan diets.