The Americas coating additives market size exceeded USD 1.60 billion in 2015. Rapid expansion in the infrastructure and the automobile industries has led to significant demand for the protective enamels in the region.

Renovation and restoration of old architectures have gained momentum in most of the economies in the region over the past few years. Several new constructions and mega infrastructure projects have also been sanctioned over the past few years especially in the U.S., Canada, Brazil, and Argentina. This factor is anticipated to lead to higher usage of coatings, thereby creating a sustained demand for the additives in the construction sector in the region. 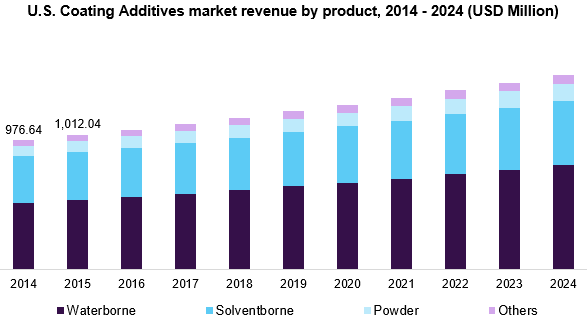 Countries including the U.S. and Canada are focusing on green construction for the past few years, and the trend is expected to continue in the near future. The industry has witnessed a shift in consumer trends regarding reducing reliance on petrochemical-based additives to moderate volatile organic contents (VOC) emissions. This has led to high rate of penetration of waterborne formulations across various architectural and industrial applications especially in mature economies of Canada and the U.S.

The majority of these condiments are mostly derived from petrochemicals, except for some such as the cellulose and vegetable oil. The low crude oil prices from the last few years have positively impacted the market and will continue to be so until the prices get stabilized.

New product and technologies innovation, such as the powder-based formulations and acrylic-based primers, is expected to penetrate the customer base in the near future. Technological advancements, moderate pricing, and diverse product portfolio are anticipated to be the major factors driving the industry over the foreseeable future.

Rising health awareness and the existence of inflexible policies over VOC content in the region have forced the formulators to either use additives that help reduce the content of volatile organic compounds or to shift to waterborne formulations.

High requirement for bio-degradable and environment-friendly coating additives with enhanced durability and performance is expected to drive the industry growth in the region. Constant innovations and development of bio-degradable agents with multiple functions are expected to remain one of the major buying criteria for these products. Additionally, long-term contracts with domestic suppliers or manufacturers may help in tackling volatile pricing and uninterrupted supply.

South America’s coastline provides opportunities for the development of the marine coatings industry and, hence, the government has invested in this industry in the past few years, which has led to marine infrastructure development. Increase in the marine infrastructure is also expected to indirectly influence the architectural coatings market and, hence, the coating additives market.

Waterborne coating additives had the highest market penetration and accounted for over 49% of the total demand in 2015. The segment is anticipated to witness above-average growth rates over the forecast period owing to a significant replacement of solvent-borne counterparts in several applications including furniture & interiors and general industrial manufacturing.

Powder-based formulations are anticipated to witness the highest growth rates over the next eight years. Rising applications in numerous sectors including automotive, wood & furnishing, and industrial are key factors expected to steer market growth over the next eight years. Surging demand for eco-friendly formulations in the glossy application is expected to steer product demand over the forecast period.

On-going R&D regarding innovation in high-performance additives has led to new product development with improved efficiency. Some of the key developments include surfactants for providing high surface energy at low concentrations, performance-enhancing polymers for construction, and wood coating applications for enhancing UV stability and exterior weather ability.

Rheology modifiers dominated the Americas coating additives market while accounting for over 28% of the total volume in 2015. The segment is predicted to witness significant growth and is projected to reach a net worth exceeding USD 712.8 million by 2024. These modifying agents minimize spattering during brush application and enhance the sag resilience of the coatings. In addition, it also tends to reduce sedimentation of the finished products, thereby strengthening the durability and consistency for a prolonged duration. 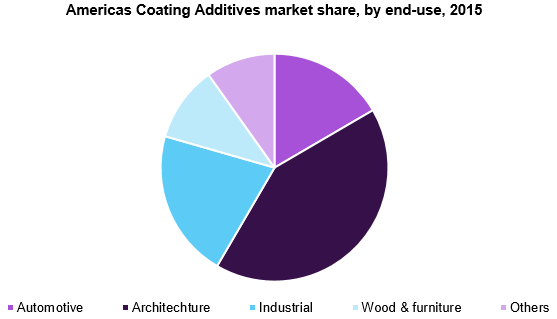 Biocides are expected to witness significant growth over the next eight years. Canada's biocide additives market is estimated to grow at a CAGR of 3.2% from 2016 to 2024. These elements have gained significant prominence in the paints industry, especially in high capital industrial and medical applications over the past few years. The use of biocides in formulations protect the structures from both in-can or dry film damages caused by typical microbial activities.

The acrylic coating additives emerged as the leading segment with net demand exceeding 168 kilotons in 2015. Less toxicity and low cleanup costs are major features in addition to the enhanced adhesive features that have contributed to significant penetration of the segment across various end-use sectors including architecture, industrial, and automotive.

Polyurethane (PU) resins are expected to witness moderate demand from the automotive and coil sectors. Shifting consumer preference for high-quality finishes in outdoor and indoor applications is expected to play a major role in steering product demand over the next eight years. This segment is estimated to grow at a CAGR of 3.4% over the forecast period.

The metallic additives segment is expected to witness slow growth over the forecast period. This can be attributed to the shifting trend towards acrylic and alkoxylates among various end-use industries. However, the demand for luster pigments for various metallic and plastic surfaces is expected to offer sustainable growth over the forthcoming years. This segment was valued over USD 41 million in the U.S. in 2015.

The construction industry in the U.S. is expected to witness significant growth owing to the increasing adoption of new infrastructure models in retail, office, and industrial facilities. Key cities such as San Francisco and Nashville offer ample opportunity for the industry participants as the end-users are modernizing their infrastructure with innovative products.

Increasing construction spending in residential, non-residential, and non-building structures is expected to remain an important driver for the coating additive market over the forecast period. Residential structures are expected to witness substantial growth owing to increasing trend of nuclear families coupled with declining prices of new housing structures in the U.S. Recovery of the industrial sector, post-recession, is also anticipated to have a positive impact on the construction industry in the U.S.

Population growth, urbanization, and rising consumer spending in the housing sector have played an important role in the development of the construction and energy industries in Mexico. In addition, low manufacturing cost and vicinity to the U.S. have increased the importance of Mexico as a manufacturing hub for automobile, oil & gas, electronics, personal care, and pharmaceutical sectors, automotive, construction, and energy industries.

Ongoing projects for high-speed rail and inter-urban train connectivity is expected to steer investments by various industrial entities. In addition, ongoing favorable government initiatives such as USD 9.2 billion investment plans for establishing a new airport in Mexico City is anticipated to offer ample opportunities for pigments and coating additives market over the forecast period.

The presence of a large number of players in the American market makes it highly competitive in the present scenario and for the years to come over the near future. Technological innovation, product pricing, and diverse product portfolio are expected to be some of the major strategies adopted by the key industry participants in gaining a competitive edge over others.

The Americas coating additives market comprises a large number of players in the present industry scenario. Some of the major players include BASF, Dow Chemicals, Dynea AS, Evonik Industries, AkzoNobel NV, Ashland, Elementis PLC, The Lubrizol Corporation, The Eastman Chemical Company, and BYK-Chemie GmbH. Price wars between existing players will also serve to dissuade potential new entrants. However, the relative ease of end-user switching, coupled with good market performance in recent years, may serve to attract new entrants to some extent over the forecast period.