The global ammunition market size was valued at USD 21.38 billion in 2020 and is expected to grow at a compound annual growth rate (CAGR) of 3.6% from 2021 to 2028. Rising hostilities and terrorist activities across the globe are likely to increase the procurement of defense equipment by prominent militaries, thereby, directly benefiting the market over the forecast period. The rising popularity of sports that utilize rifles and pistols is expected to increase the penetration of small-caliber ammunition in the projected time. Moreover, technological advancements in the market have introduced lightweight bullets made from polymer-based cases, which are projected to support the overall market growth. 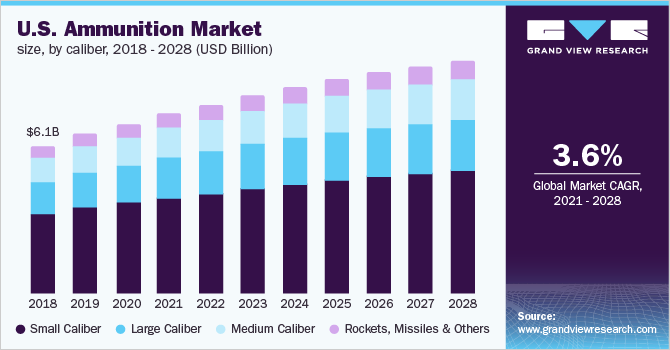 High investments by the U.S. government for enhancements in military and armed forces are expected to support the market growth in the country. The procurement of small caliber ammunition by civilians and the homeland security department is expected to bolster the overall market. Moreover, enhancement of sales channels, such as online sales, in the country is likely to supplement the growth.

A rise in the adoption of advanced materials for the production of lightweight ammunition is expected to lead to fuel-efficient transportation, which, in turn, reduces the overall transportation cost. Furthermore, the above-mentioned trend is anticipated to enable transportation of more rounds within the same weight limits, thereby positively impacting the market.

Commercially, these products are not widely available on account of the restrictions on weapons in major economies. However, defense organizations in major territories have agreed on the procurement of these products to enhance the security capabilities. Moreover, enhancements in the military by major countries like China, India, France, and Russia are expected to support the market growth during the forecast period.

The global market is characterized by long-term collaborations and acquisitions between key companies and governments. Several governments across the globe are aiming to enhance their defense forces through the procurement and development of indigenous production facilities from foreign players.

The small caliber ammunition segment accounted for the largest market share of over 50% in 2020 owing to a wide array of applications in shotgun pistols, assault rifles, rifles, and revolvers. Also, the segment is likely to witness the fastest CAGR from 2021 to 2028 on account of increasing demand for these products from security forces to tackle the rising number of instances of armed conflicts.

Increasing procurement of medium caliber products by the U.S. Army and its alliances is expected to boost the segment growth in the coming years. Medium caliber ammunition includes high-performance 20mm, 25mm, 30mm, and 40mm cartridges for a broad range of applications including land, sea, and air with the capability to penetrate light armor, material, and personnel target. Increasing use of guns and rifles by the prominent militaries across the globe is anticipated to augment the demand for medium caliber products.

The centerfire product segment dominated the global market accounting for a revenue share of over 66% in 2020. These products are usually used for rifles, shotguns, and handguns. In centerfire ammunition, the primer is placed in the center of the casing base. This type of ammunition is reloadable and hence is the most common type of cartridge used.

Centerfire ammunition is used as a universal standard in military, police, and security forces owing to its potential to allow high pressure and the ability to reuse the casings. These cartridges are preferred for military operations owing to their thicker metal casing that can withstand rough handling without high damage. 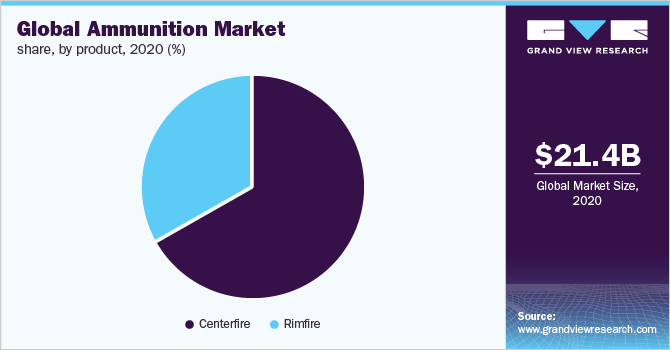 The rimfire segment is expected to register a steady CAGR of 3.5% over the estimated period owing to the increasing product demand. Rimfire bullets are preferred by beginners as they offer limited recoil when they are being used. Moreover, they are cheaper as their thin casing with a flattened primer is easy to manufacture; however, they are limited to small calibers. This can be attributed to the fact that the nature of the bullet casing is required to be thin enough to crush and ignite the primer, which is difficult to accomplish in medium and large calibers. This type of ammunition is commonly used for .22LRs.

The defense application segment led the market in 2020 and accounted for a revenue share of 76.2%. The segment is likely to retain its dominant position throughout the forecast period. Increasing cross-border conflicts have fueled the growth of the bullets market across the globe. Moreover, rising geopolitical tension and terrorist activities are expected to increase product penetration. Full metal jacket bullets are used in military handguns on a large scale, whereas air-force tends to use hollow-point bullets for greater accuracy. Hollow-point bullets are popular for use among law enforcement and military personnel due to their rapid expansion property and excellent stopping power.

The semi-jacketed hollow-point bullets, known for their controlled penetration and high stopping power, can create a larger than average wound cavity and ensure effective results in a single shot. Thus, these bullets are typically used for self-defense, pistol target shooting, and backyard shooting. The rise in procurement of advanced products is likely to offer growth opportunities to the segment. With the advancements in technology, bullets capable of turning, changing their speed, and sending data are being developed by major countries including Russia, U.S., and others. Thus, technological developments are expected to aid the market growth.

North America was the largest regional market in 2020 and accounted for a share of over 33%. The growing terrorist activities coupled with lenient gun laws are expected to promote the consumption of bullets. Furthermore, the surge in sports and hunting activities is expected to be a crucial factor for market growth.

Moreover, high demand from the U.S. is expected to support the regional market growth. The defense budget in North America has increased, which is heavily influencing the bullets market in the region. The long-term competitive strategy of the U.S. Department of Defense for the development of technologies and new concepts of warfare is expected to aid the market growth.

In Europe, the directives are provided by the government for possession of firearms, the supply of firearms in a single market, and a protocol against the manufacturing and trafficking of firearms. The European defense system has faced challenges in dealing with refugees from the Middle East and Syria. Due to these factors, the region has faced a threat of terrorism. This, in turn, is expected to boost the ammunition market in Europe over the forecast period.

Asia Pacific is projected to be the fastest-growing regional market from 2021 to 2028. This growth can be attributed to the rising geopolitical disputes and the increasing threat of terrorist attacks. Countries like China and India are spending on the modernization of their armed forces. These countries procure ammunition for the armed forces and law enforcement agencies to minimize the growing crime rate. These factors are also expected to drive the market over the forecast period.

These players are also involved in teaming and sub-contracting relationships with their competitors. Competition for major defense programs often requires teams to collaborate their broad capabilities to cater to customer requirements. Opportunities associated with these programs include roles as the provider of sub-system or component and programs integrator. Some of the key companies in the global ammunition market are:

This report forecasts revenue growth at global, regional, and country levels and provides an analysis of the latest industry trends in each of the sub-segments from 2017 to 2028. For the purpose of this study, Grand View Research has segmented the global ammunition market report on the basis of caliber, product, application, and region:

How big is the ammunition market?

What is the ammunition market growth?

Which segment accounted for the largest ammunition market share?

b. North America dominated the ammunition market with the highest share of 33.3% in 2020. This is attributable to the growing demand for advanced weapons by the military in the U.S.

Who are the key players in the ammunition market?

b. Some key players operating in the ammunition market include Northrop Grumman Corporation, FN Herstal, Olin Corporation, General Dynamics Corporation, and BAE Systems, Inc. among others.

What are the factors driving the ammunition market?

b. Key factors driving the market growth include rising global military expenditure. Moreover, rising terrorist activities and political violence across the globe are anticipated to ascend the demand for ammunition over the forecast period.

Which caliber segment led the ammunition market in 2020?

b. The small caliber segment accounted for the largest share of over 50% in the ammunition market in 2020, on account of a wide range of applications spanning shotgun pistols, assault rifles, rifles, and revolvers.

Which product segment accounted for the highest share in the ammunition market in 2020?

b. The centerfire segment accounted for the largest revenue share of more than 66% in the ammunition market in 2020.

Which application segment accounted for the highest market demand in the ammunition market in 2020?

b. The defense application segment accounted for the largest market share of 76.2% in the ammunition market in 2020 and is expected to maintain its dominance in the coming years.

Which cartridges are included in the medium caliber product segment in the ammunition market?

What are some of the notable innovations being observed in the ammunition market?