The global amyotrophic lateral sclerosis treatment market size was valued at USD 537.2 million in 2018 and is expected to grow at a compound annual growth rate (CAGR) of 5.8% from 2019 to 2026. Rising geriatric population, growing awareness about ALS, and increasing incidence rate are the factors driving this market. However, the high cost associated with ALS treatment may pose an impediment to the market during the forecast period. 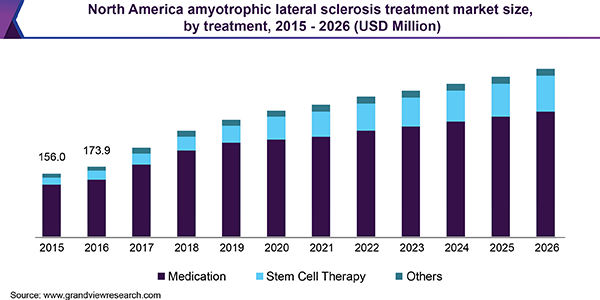 Amyotrophic lateral sclerosis (ALS), or Lou Gehrig's disease, is a progressive neurodegenerative disorder that damages nerve cells in the central nervous system responsible for controlling the voluntary muscles. Some of the common symptoms include muscle twitching, stiff muscles, and weakness due to a decrease in the size of muscles of the legs or arms. Around half of the people suffering from ALS may lose the ability to swallow, breathe, speak, walk, and use their hands.

According to the National Institute of Neurological Disorders and Stroke (NINDS), following gradual paralysis, patients with ALS often die from respiratory failure within 3-5 years. It also states that between the two types of ALS, the sporadic type is the most common form, accounting for 90- 95% of all cases in the U.S. while the familial type accounts for the rest.

Familial ALS (FALS) is hereditary, where there is a 50% chance of inheriting the genetic mutation for each offspring and eventually developing the disorder. In 25-40% of the people suffering from familial ALS, the defect is most commonly found in the C9ORF72 gene. Mutation in this gene also leads to a condition known as frontotemporal dementia (FTD), which may develop along with ALS as comorbidity referred to as ALS-FTD.

Although there is no cure for ALS, treatments such as medications and stem cell therapies can help in the management of the symptoms, prevention of unnecessary complications, and slows down the disease progression. Adoption of a sedentary lifestyle increases the risk of developing the disorder among the geriatric population, which creates a demand for novel therapeutics approaches and targeted treatment options. These factors are expected to further drive the amyotrophic lateral sclerosis treatment market.

The treatment segment has been divided into medications, stem cell therapies, and others. Among the treatments, the medication segment is anticipated to dominate the global ALS treatment market through the forecast period. There are only two drugs approved for the treatment of ALS, Rilutek (riluzole), and Radicava (edaravone). Another drug, Nuedexta (dextromethorphan/quinidine) has received FDA approval for the treatment pseudobulbar affect (PBA), comorbidity of ALS.

Stem cell therapy is expected to show the highest CAGR due to the increasing demand for new approaches and advanced treatment options. Several initiatives have been taken by the government authoritative bodies and the Collaborative ALS Drug Discovery Initiative (CADDI) to fast-track the development of novel drugs and treatments. This is expected to further boost the number of clinical trials and the launch of pipeline drugs during the forecast period. 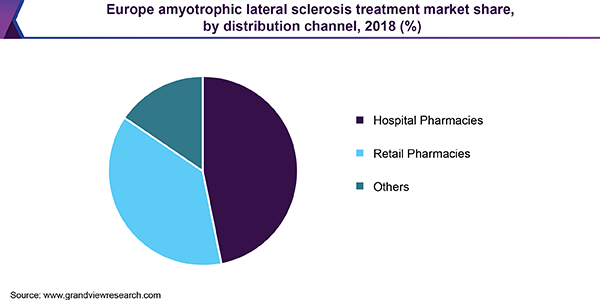 Other distribution channels in the amyotrophic lateral sclerosis treatment market include online pharmacies, diagnostics laboratories, and clinics. Online Pharmacies are also gaining prominence due to the growing popularity of eCommerce channels that offer a wide range of options along with in-depth drug information.

Among the regions, North America accounted for the largest market share in 2018 and is estimated to retain its leading position over the forecast period. High healthcare expenditure, favorable reimbursement policies, huge demand for ALS drugs, and established healthcare infrastructure are the factors driving the market. According to the data published in the Centers for Disease Control and Prevention (CDC) Morbidity and Mortality Weekly Report, in 2015 around 16,583 cases of amyotrophic lateral sclerosis were identified in the U.S.

The Asia Pacific is expected to exhibit the fastest growth rate of all regions over the forecast period. The industry is witnessing an increasing revenue generation from riluzole generic manufacturers in this region, especially in India and China. Some of the key factors propelling the market growth in this region include growing R&D investment in the healthcare sector, plenty of unexplored opportunities, and promising initiatives by the manufacturers as well as the governments.

However, the patent for Rilutek, which was launched in 1995, expired in 2013, giving rise to the production of cheap generic versions of the drug. Companies are adopting various strategies such as new product development, expansion into emerging counties, and strategic partnerships to gain a competitive advantage. Some of the prominent players in the amyotrophic lateral sclerosis treatment market include:

This report forecasts revenue growth at global, regional, & country levels, and provides an analysis of the industry trends in each of the sub-segments from 2015 to 2026. For this study, Grand View Research has segmented the global amyotrophic lateral sclerosis treatment market report based on treatment, distribution channel, and region:

How big is the amyotrophic lateral sclerosis treatment market?

b. The global amyotrophic lateral sclerosis treatment market size was estimated at USD 597.0 million in 2019 and is expected to reach USD 647.9 million in 2020.

What is the amyotrophic lateral sclerosis treatment market growth?

b. North America dominated the amyotrophic lateral sclerosis treatment market with a share of 48.4% in 2019. This is attributable to high healthcare expenditure, favorable reimbursement policies, huge demand for ALS drugs, and established healthcare infrastructure.

Who are the key players in amyotrophic lateral sclerosis treatment market?

What are the factors driving the amyotrophic lateral sclerosis treatment market?