The global Anesthesia CO2 Absorbent Market size was valued at USD 43.7 million in 2015 and is expected to grow at a CAGR of 8.8% over the next seven years. Some key drivers include the rising incidences of chronic illnesses and fatal accidents, augmenting geriatric population, and increasing volume of surgeries.

Increasing incidences of chronic conditions are expected to increase demand for surgeries. With rising volume of surgeries, required anesthesia is anticipated to rise, thereby propelling market growth. Furthermore, guidelines and safety parameters decided by institutes such as the Anesthesia Patient Safety Foundation, the CEA, and the CDC are other vital impact rendering drivers. 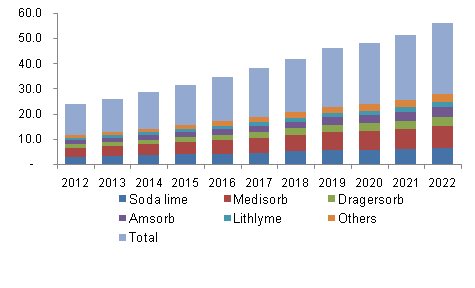 A huge geriatric population base is prone to suffer from diseases such as cardiac disorders, neurological conditions, respiratory diseases, and diabetes, ultimately demanding surgical intervention. This acts as a major driver for growth.

Supportive government initiatives for healthcare are expected to positively impact growth of anesthesia disposables and thereby the anesthesia CO2 absorbent market.For instance, it intends to expand its infrastructure to grassroots medical networks through investments in hospitals.

In February 2015, the European Investment Bank announced a grant of USD 150.9 million for construction of the Midland Metropolitan Hospital in England. This hospital is expected to specialize in accident and trauma cases and form the largest emergency department of the country.

The key products analyzed in the study are Soda lime, Medisorb, Dragersorb, Amsorb, Litholyme, and others. The brands, Medisorb, Dragersorb, and Amsorb are currently capturing majority of the market share. However, over the next seven years, newer formulations such as SpiraLith are anticipated to change the dynamics.

Medisorb is expected to dominate the market in 2015 with over 25% share owing to the company’s efficient distribution network and goodwill. Amsorb plus from the Amsorb segment is the latest product offered by the manufacturer and is documented to eliminate formation of toxic products such as compound A and carbon monoxide. Hence, it is expected to witness the fastest growth over the forecast period.

Continuous evolution of absorbent formulations to enhance product performance is expected to propel demand over the next seven years. Manufacturers are primarily focusing on preventing the formation of fatal compounds and increasing the absorption capacity during the anesthesia process.

North America dominated the anesthesia CO2 absorbent market in 2015 with over 35.0% share. Increasing surgical volume and supportive initiatives by government and healthcare agencies to expand medical tourism and prevent the U.S. citizens to travel to other countries are expected to drive growth.

According to the CDC, in 2013 about 51.4 million procedures were performed in the U.S. with cardiological procedures forming the largest segment. Latin America is anticipated to witness the fastest growth for the anesthesia CO2absorbent industry over the forecast period owing to the prevalence of infectious and chronic diseases being comparatively high within the region.

The market is oligopolistic in nature and is dominated by few companies having patent rights. Expiry of these patents may trigger the entry of new participants. Another factor supporting this rising competition is the low bargaining power in the hands of suppliers and buyers.

Hence, over the forecast period, the industry may witness establishment of many new companies, thereby increasing competition and affecting the revenue of existing players. Another strategic move by the players is creation of strategic alliances and acquisitions to benefit from goodwill earned by the target company.

In December 2013, the GE Healthcare sold Vital Signs Segment to CareFusion. Under this agreement, CareFusion undertook the products such as single patient use consumables for anesthesiology and respiratory care.

The scope of this study is focused on the niche market of CO2absorbents within the anesthesia disposable devices space. Estimates and forecasts are based on triangulation of information acquired or analyzed using multiple approaches or models. One such approach is commodity flow, wherein the companies under the study are segmented on the basis of products manufactured, which were further downsized to provide the revenue for CO2 absorbents.

This approach is further correlated with other market analysis tools and also validated by conducting primary interviews. Primary respondents also contributed in understanding the quantitative aspects of the market such as key player strategies, consumer demands, and allied industry influences.

Hence by collaborating all the information and analysis performed, the report has been developed to provide a holistic scenario of the industry on global as well as regional levels. In order to allow further aid to clients, we provide free customization of the study based on their needs.