The global animal feed micronutrients market size was valued at USD 1.23 billion in 2016. The global increase in the consumption of dairy products including milk, yogurt, and cheese is expected to drive market growth. Changing preference of consumers toward meat as compared to vegetarian food is anticipated to further increase the utilization of the product.

The capability of animal feed micronutrients to increase the weight of animals, especially swine, is likely to provide a positive scope for industry development. The utilization of the product leads to the yield of good quality meat, which is expected to drive the demand over the forecast period.

Increasing utilization of dairy products in the food & beverage industry in the form of cheese, butter, cream, and curd is expected to drive the demand across various regions. Animal feed micronutrients facilitate high milk production, which is likely to propel its utilization in ruminant nutrition over the forecast period.

Heavy metals, such as zinc and copper, are widely utilized as animal feed micronutrients. These metals are considered as soil pollutants and likely to restrain market growth. Zinc and copper are listed as priority pollutants in 40 CFR part 423, appendix A. by the U.S., which is further expected to hinder the demand.

Restrictions in the consumption of meat across various economies are likely to hinder market development. For instance, in India, the consumption of beef is limited to certain parts of the country. Few cattle farmers still prefer grass and other traditional food over manufactured products, which is expected to restrain the industry growth.

Poultry application accounted for a share of 43.6% of the global market in 2016. Micronutrients play a very important role in the overall development of the layers and broilers. These facilitate superior reproduction, health, and overall performance of the birds, which are expected to drive the market growth.

The demand for the product in swine application accounted for the second-largest share in 2016. Feed is one of the most important factors that help in the proper raising of pigs and accounts for about 60% to 75% of the total incurred cost. Hence, special focus is laid on providing pigs with key nutrients, which is likely to increase the utilization of the product.

Fish is considered as one of the most important sources of vitamin A, iron, and zinc in human nutrition. Hence, farmers are taking efforts to improve the micronutrient intake in fish to avoid deficiencies. These factors are likely to increase the demand for micronutrients in the aqua application.

The demand for micronutrients in equine feed is expected to witness sluggish growth on account of declining equine feed production in various regions. Declining rate of horse ownership coupled with high cost of feed is the major factor affecting the market.

Iron accounted for 25.8% of the overall market share in 2016. High prevalence of anemia in domestic animals is expected to fuel the demand for iron-based micronutrients across various regions. The rising government investment in livestock farming is also expected to have a positive impact on demand over the next eight years.

Manganese is the fifth most abundant element on earth and plays a major role in the growth and fertility of animals. Manganese has been proved to play a vital role in the reproductive ability of animals along with immunity. The growing demand from the poultry application is expected to fuel the consumption of manganese over the forecast period. 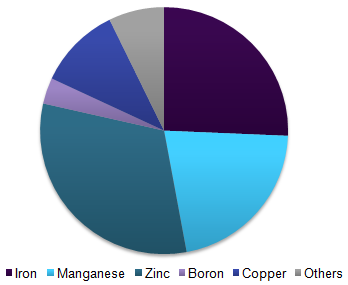 Zinc was the largest product segment in 2016 and is anticipated to grow at a CAGR of 6.8% from 2017 to 2025. The ability of the product to improve the immunity of livestock is expected to fuel the demand for zinc over the forecast period. Zinc forms an essential component of the RNA and DNA polymerase enzymes and boosts the activity of hormones such as glucagon, insulin, growth hormones, and sex hormones.

Other major micronutrients include cobalt, selenium, and iodine. The demand for these nutrients is likely to be driven by the growing consumption of animal feed premixes and animal nutrition products.

Asia Pacific dominated the global animal feed micronutrients market in 2016, accounting for a share of 34.5%. Rapidly growing population and consumer disposable income are expected to augment the demand for meat and dairy products, which is likely to have a positive impact on the market over the next eight years.

Europe accounted for the second-highest share of the global animal feed micronutrient demand in 2016. Spain, Germany, and France are the major markets in this region on account of high animal feed production. The presence of numerous feed manufacturers including Vall Companys Group, Agropecuària de Guissona, Agravis Raiffeisen, DTC, PHW Group and Avril Group is expected to have a positive impact on the market over the forecast period

Brazil accounted for a share of 54.0% of the market in Central & South America. The animal feed industry in Brazil has been witnessing a stable growth and remained unaffected by the economic situation in the country. The production of broiler feed increased considerably in 2015 on account of increased consumer preference toward poultry as compared to beef.

The Middle East and Africa is the second fastest-growing market on account of high growth in the African region. South Africa and Egypt are the major feed producers in Africa. In the Middle East, Oman and Libya have been witnessing significant growth in production, which is further expected to fuel the market development.

The key players in the industry are focused on expansions in attempt to strengthen their position across various regions. The companies such as Archer Daniels Midland Company, Nutreco NV signed agreements with universities and invested heavily in research & development. New products are continuously being launched to meet changing consumer trends and industry standards.

The companies are involved in expanding sales and increasing manufacturing capacity to grab a higher market share in the industry. In 2016, Cargill invested approximately USD 33 million to open new plants in Asia Pacific and Europe regions. The Asia Pacific region is expected to provide new opportunities for market players to expand their footprint due to increasing meat consumption.

This report forecasts revenue growth at global, regional, & country levels and provides an analysis of the industry trends in each of the sub-segments from 2014 to 2025. For the purpose of this study, Grand View Research has segmented the animal feed micronutrients market on the basis of product, application, and region: