The global antacids market size was valued at USD 5.83 billion in 2017 and is projected to expand at a CAGR of 3.9% over the forecast period. Changing dietary habits is one of the major factors expected to fuel growth during the forecast period. Increasing prevalence of Gastro-Esophageal Reflux Diseases (GERD) is expected to affect the overall market over the forecast period. According to the Gut journal, published by the International Foundation for Gastrointestinal Disorders; in 2017, the prevalence of GERD was around 18% to 28% in North America, 9% to 26% in Europe, 3% to 8% in East Asia, 9% to 33% in the Middle East, 12% in Australia, and 23% in South America. 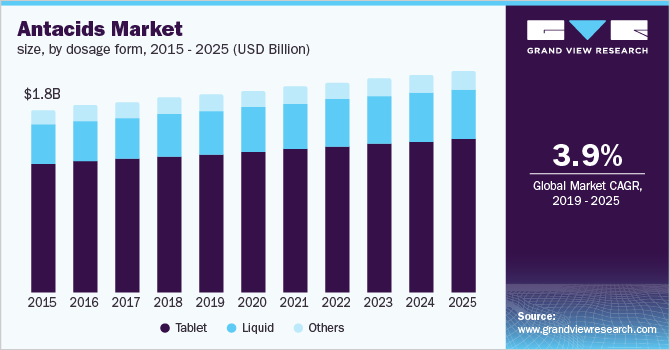 Furthermore, increasing awareness about GERD is anticipated to boost the market. According to an article published in the International Foundation for Gastrointestinal Disorders, the 19th Annual GERD Awareness Week was in November 2018 which provided information and support regarding this condition. Also, the International Foundation for Functional Gastrointestinal Disorders (IFFGD) encourages patients suffering from GERD-related symptoms, to consult their physicians.

Also, the increasing prevalence of heartburn is estimated to affect the market over the forecast period. According to an article published in the Medical Xpress, a web-based medical and health news service; in 2017, researchers from the University of Michigan identified that acid reflux and heartburn affected more than 20% of the U.S. population.

In the geriatric population, acid complications create a unique challenge for both general practitioners and gastroenterologists. Moreover, such patients often suffer from various symptomatic disorders such as Barrett's esophagus, and esophageal cancer. For the treatment of such disorders, a combination of treatments is used and the use of antacids in such cases has increased significantly which is expected to drive the market growth in the forecast period.
Furthermore, e-commerce is driving the demand for antacids through which online retail channels are growing rapidly. Thus, the growing popularity of e-commerce and the increasing number of online healthcare providers are having a positive impact on the overall growth of the market.
One of the primary hindrances for the antacid market is the side effects associated with antacid consumption. Some common side effects of antacids aremilkalkali syndromeand dosedependent rebound hyperacidity. Antacids with aluminium hydroxide can also cause side effects such as aluminum poisoning, constipation, hypophosphatemia, and osteomalacia. The growing concerns about these side effects are anticipated to restrain the growth of this market.
Furthermore, antacids when taken with other acid drugs lead to absorption of both drugs resulting in reduced effectiveness. Increasing choice of antacids available for consumers in the market, people's ignorance ofthe symptoms of hyperacidity, and lack of awareness are expected to challenge the market growth.
Antacids were previously available only in tablets, liquids, and powders but, researchers have now developed a mouthmelting antacid consisting of microgranule that dissolves easily in the mouth. These granules integrate the effects of the herbal ingredients contained with the latest melting technology. Mouthmelting antacids are a new trend in the antacid market which is expected to provide a lucrative opportunity for market growth during the forecast period.

Tablet was estimated to be the largest segment in 2017. The presence of chewable tablets in different flavors helps improve patient adherence to the medication, which in turn is expected to contribute to the growth of the segment. Tablets can provide the exact amount of dosage to the patients compared to other dosage forms and they are easy to store. These factors can be attributed to the segment growth over the forecast period. Other key drivers expected to facilitate the segment growth include the launch of new products by major players.

The liquid segment is expected to be the fastest-growing segment in the overall market during the forecast period. Presence of key players, such as Pfizer Inc.; GlaxoSmithKline plc. and Dabur offering liquid antacid is estimated to boost the segment growth. Also, the liquid dosage form is one of the favored choices for children and the elderly population due to its palatable taste. This factor is also anticipated to bode well for market growth.

Based on the distribution channel, the market is trifurcated into hospital pharmacy, retail pharmacy, and online pharmacy. In 2017, retail pharmacy held the largest market share due to the easy accessibility and availability of these pharmacies. For instance, MedPlus has around 1,400 outlets out of which 1,350 are self-owned and rest are taken as a franchisee.

Online pharmacy is estimated to be the fastest-growing segment over the forecast period owing to increasing awareness among consumers. According to a survey conducted by the Alliance For Safe Online Pharmacies (ASOP Global) in 2017, 33% of survey participants from Canada had purchased prescription medicines from an online pharmacy. 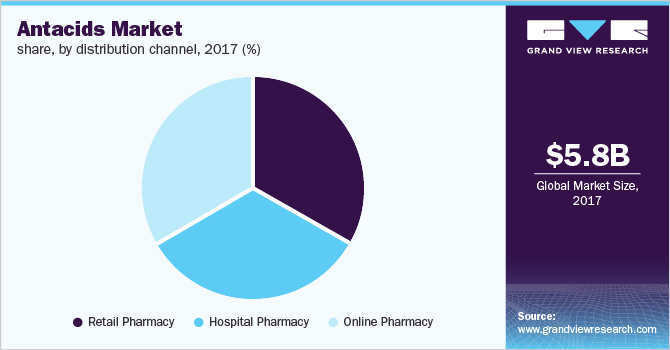 People are opting for online pharmacies owing to lucrative offers, such as price discounts, ease in availability of drugs, and home delivery services. Also, the growing adoption of information technology in the healthcare sector is enabling clinicians to send prescriptions electronically, which is expected to boost growth.

The Asia Pacific is expected to be the largest and fastest-growing regional segment during the forecast period owing to high unmet clinical needs, availability of effective treatment methods, rising disposable income, and consumer awareness about the availability of these products. Besides, the presence of key players, such as GlaxoSmithKline plc.; Pfizer Inc.; Abbott is anticipated to grow the market over the forecast period. Improving healthcare infrastructure, and growing investments by market players are expected to increase its growth. 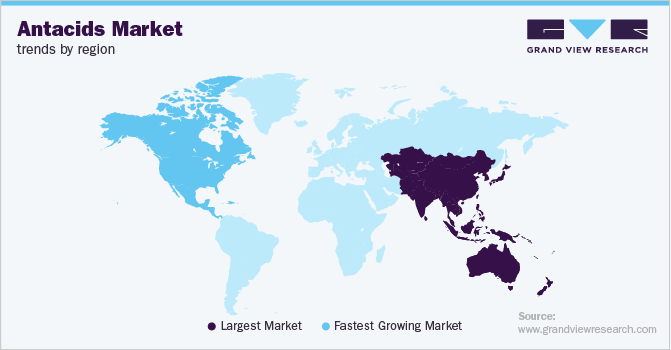 North America is estimated to be the second-largest growing segment. This was attributed to increasing digestive disorder prevalence coupled with consumer awareness of antacid products. In 2017, according to the CDC, the number of visits to emergency departments with digestive system diseases as the primary diagnosis was around 32.3 million. Furthermore, the presence of developed economies within the region is adding fuel to its growth in this region.

The overall market is likely to face intense competition over the forecast period owing to the presence of multinational players and small-scale companies. Geographical expansion and joint ventures are some of the key strategies undertaken by key players in the market. For instance, in 2016, Takeda Pharmaceutical Company Limited launched first and approved proton pump inhibitor, Dexilant (Dexlansoprazole), which uses dual delayed-release technology for patients with GERD.

This report forecasts revenue growth at global, regional, and country levels and provides an analysis of the latest industry trends in each of the sub-segments from 2014 to 2025. For this study, Grand View Research, Inc. has segmented the global antacids market report based on dosage form, distribution channel, and region. 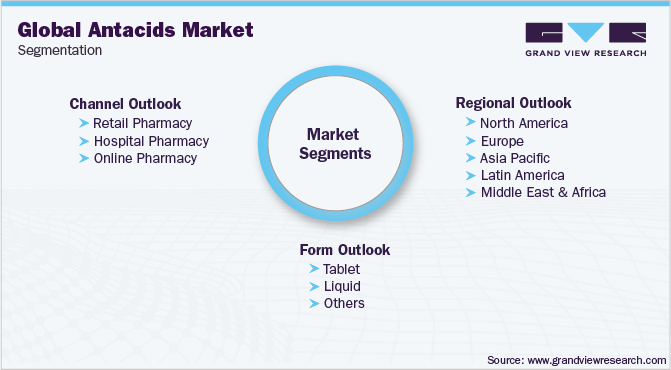