The global antipsychotic drugs market size is expected to be valued at USD 14.4 billion by 2025, expanding at a compound annual growth rate (CAGR) of 2.1% from 2018 to 2025. Growing prevalence of psychosis and related diseases is driving the demand for antipsychotic drugs. The major factors contributing towards the growing incidence of these disorders include genetic mutations, substance-induced psychoses, and physical illness resulting in depression. 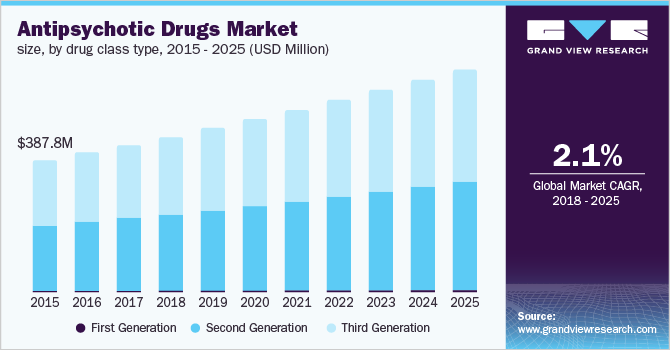 The introduction of newer antipsychotic compounds and huge investments for R&D are boosting the market growth. In addition, increasing efforts taken by the market players to expand therapeutic applications of these medicines are anticipated to create opportunities for the expansion of portfolio of antipsychotics in the near future, thereby fueling the demand.

Adverse effects such as insomnia, dry mouth, drowsiness, blurred vision, and probability of habit formation may have a harmful impact on a patient’s health. These effects are challenging the adoption of these drugs.

The patent expirations of key brands, such as Seroquel, Risperdal, Zyprexa, and Invega are restraining the growth of these brands. Moreover, players are introducing generic versions of antipsychotics and have begun investigating new therapeutic applications for these products; hence the generic products are slowly replacing the established brands in antipsychotic market.

There have been changes in the R&D of antipsychotic drugs due to increasing awareness regarding the financial burden. This has led to the high demand for effective treatment for psychiatric illnesses. Thus, many pharmaceutical companies have launched long-acting injectables for antipsychotic drugs. Therefore, the benefits attributed to these long-acting injectables have led to greater adoption of these products leading to growth in the market.

Schizophrenia is a severe mental condition in which the patient faces abnormality in thinking, conduct, emotions, and sense of self. This condition can increase the chances of death if not treated properly. Therefore, many companies are focusing on developing new medications for the treatment of this condition. There are many FDA-approved medicines on the marketsuch as Chlorpromazine, Olanzapine, Aripiprazole, and other drugs approved each year, that are projected to boost market expansion throughout the projection period.

The overprescription of these medicines tends to have serious consequences as well as addiction. This condition is seen in people belonging to developed countries such as North America. This led to strict regulations by the government on these pharmaceuticals, therefore limiting the market growth.

Mental illnesses are becoming more common, imposing pressure on the healthcare system. As a result, the government is concentrating its efforts on increasing public knowledge of the illnesses and the effectiveness of the treatments used to cure them. As a result, there has been a significant increase in global demand for highly effective and safe drugs to treat persons with psychotic illnesses. In addition, the firms are focusing on the development of innovative antipsychotic injectable drugs that will help to eliminate the requirement for patients to be monitored for drug consumption. These factors are expected to provide good opportunities for the growth of the global antipsychotic drug market.

Furthermore, there has been a considerable shift toward telemedicine for the treatment of psychotic diseases during the COVID-19 pandemic. Many people's mental health suffered as a result of the lockdown and stay-at-home restrictions throughout the world. As a result, the usage of antipsychotic medicines to treat these symptoms has increased. Furthermore, during the pandemic, the global antipsychotic drugs market had a strong sales performance. This is also attributable to the pandemic's increasing usage of long-acting injectables.

The antipsychotics are segmented into three classes: first generation, second generation, and third generation. The typical or standard antipsychotics were first-generation antipsychotic drugs developed in 1950s. However, drugs under this category pose risks such as blurred vision and drowsiness and some may have fatal effects. Thus, these products are expected to witness a negative growth over the forecast period, with availability of relatively more effective drugs with fewer adverse effects.

The second generation holds the largest share in the market. This class named as atypical antipsychotics includes clozapine, risperidone, sertindole, asenapne, olanzapine, paliperidone, quetiapine. These are used for treatment of schizophrenia and have quickly begun replacing the older, first-generation antipsychotics.

The third generation, aripiprazole (Abilify) is indicated for the treatment of schizophrenia and is also used as maintenance therapy for this disease. The clinical advantages of safety and tolerability of aripiprazole contribute to the segment’s growth. Thus, it is expected to be the fastest growing segment with a CAGR of over 2.4% in the forecast period. 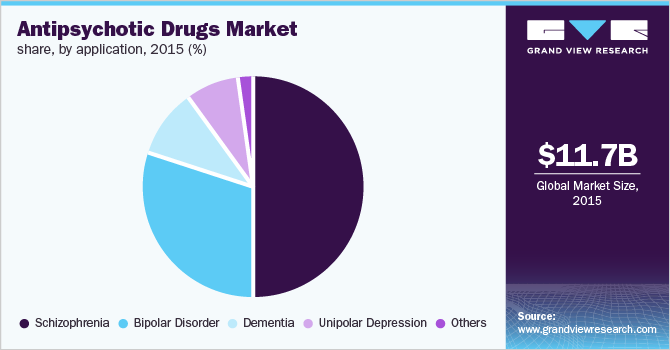 Furthermore, there is growing detection of unipolar disorder, which is a type of major depression, since the past decade owing to rising awareness regarding the disorder and available treatments. Thus, this segment is anticipated to grow at the fastest rate.

North America dominated the market by capturing the largest revenue share in 2015. According to the Anxiety and Depression Association of America, about 6.7% of the U.S. population aged 18 years and above was suffering from major depression in 2016. Many people with physical illnesses suffer from co-occurring disorders. Increasing prevalence of mental health disorders, such as schizophrenia and bipolar disorder, is driving the antipsychotics demand in North America. 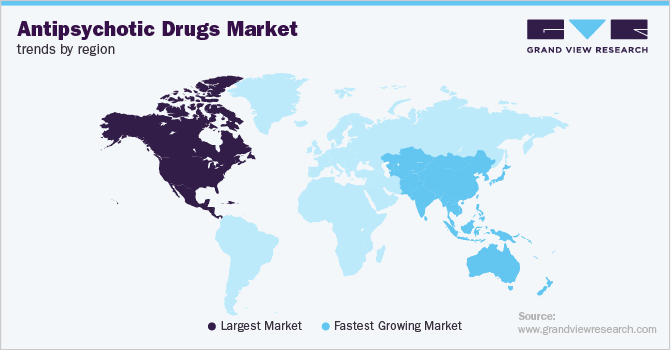 Asia Pacific is expected to exhibit the fastest growth in the near future due to rising social awareness regarding psychotic disorders and other associated disorders, such as bipolar (mania), anxiety, and major depression. Also, growing access and availability of medicines for treatment and management of the symptoms of mental illnesses is expected to drive the growth of the Asia Pacific market.

Some of the major players competing in this market include, but are not limited to, Johnson & Johnson; Pfizer, Inc.; Eli Lilly & Co.; Bristol-Myers Squibb. These companies hold a strong position globally mainly due to few commercially available antipsychotic drugs with a strong brand image.

Some other players are AstraZeneca; Glaxo SmithKline, Plc; and Allergan, Inc. Competition in the market is expected to intensify in the near future since several companies are now focusing on development of newer and better antipsychotics with lesser or negligible adverse effects to gain competitive advantage over others.

This report forecasts revenue growth at global, regional & country levels and provides an analysis on the latest trends and opportunities in each of the sub-segments from 2014 to 2025. For the purpose of this study, Grand View Research has segmented the antipsychotic drugs market on the basis of drug classes, application, and region. 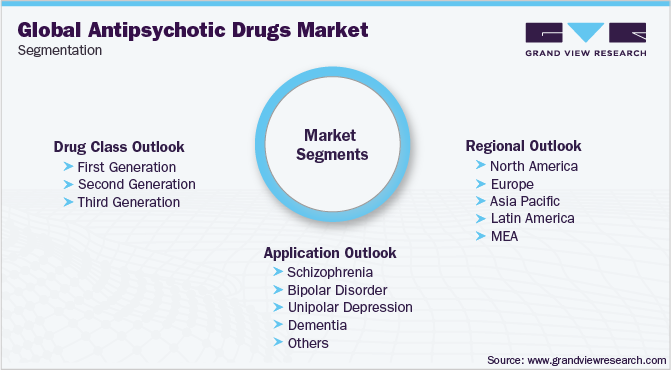