The global anxiety disorders and depression treatment market size was valued at USD 15.2 billion in 2015 and is anticipated to show steady growth due to the increasing prevalence of anxiety disorder and depression worldwide. According to estimates published by the World Health Organization in 2012, depressive disorder affected 350 million people globally, which is expected to increase due to the upward trend in the adoption of sedentary lifestyles. Depression is the second-leading cause of disabilities globally, raising the need for the development of innovative medications in the near future.

Rising demand for antidepressants due to minimum side effects associated with these medications and growing awareness levels amongst the consumers are contributing toward the growth. However, patent expiration of most drugs combined with the increasing rate of drug withdrawals and the introduction of generic variants on a large scale is expected to restrain the growth of the anxiety disorders and depression treatment market in the coming years.

Furthermore, the presence of favorable reimbursement policies in developed countries for medications, and therapies coupled with their high success rates are anticipated to drive the growth over the forecast period. Whereas, the high cost associated with the use of these devices and therapies including anesthesia and hospital stay has engendered a shift in preference for drugs amongst patients.

The product segment is bifurcated into drugs, and therapy & devices segment. Within the antidepressant class, Serotonin Norepinephrine Reuptake Inhibitors (SNRI) dominated the market in 2015, owing to their high adoption rates. The revenue share for SNRIs is expected to decline due to the scheduled loss of exclusivity of the majority of the drugs during the forecast period. For example, the patent for Cymbalta by Eli Lily & Company, which constituted a large revenue share of antidepressants, expired in June 2013 and caused a revenue drop in 2014. On the other hand, new FDA-approved products, such as Fetzima, are expected to add to the revenue for this drug class in the near future.

Moreover, Selective Serotonin Reuptake Inhibitors (SSRI) drug class retained a majority revenue share in the current scenario. SSRIs drugs relieve symptoms of depressive disorders by blocking the reabsorption of serotonin through certain nerve cells situated in the brain. These medications are used as the first line of treatment for depression but the remission rate associated with these drugs is higher, hence driving healthcare professionals toward alternative options that are more efficacious.

Antidepressants are used to treat Major Depressive Disorder (MDD) as well as anxiety disorders including panic disorder, phobias, obsessive-compulsive disorder, and traumatic stress diseases. Increasing incidence of these diseases is expected to raise the demand for effective medicines in the future.

Amongst other indications, MDD held the largest share in 2015 due to the presence of a large patient base coupled with the widespread adoption of antidepressants to treat these diseases. Furthermore, ongoing clinical trials for the development of effective drugs and their expected commercialization during the forecast period are predicted to offer a potential growth platform for antidepressants.

North America dominated the industry in 2015, largely due to the surging incidence of depressive and anxiety disorders in this region. In addition, supportive government policies, availability of different branded formulations, and higher awareness levels are anticipated to boost the vertical growth. 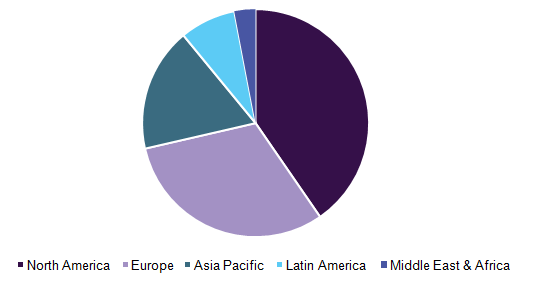 Asia Pacific region is predicted to register lucrative growth owing to increasing disposable income of individuals and large demand for antidepressants stemming from the high prevalence of anxiety disorders. In addition, improving healthcare infrastructure in emerging countries and growing awareness related to improved treatment options are the factors contributing further toward the growth of this regional segment.

For example, in 2013, Eli Lilly and Company launched an antidepressant, Duloxetine which falls under the category of SNRIs that are employed to treat MDD, post-traumatic stress disorder, and generalized anxiety disorder (GAD). In addition, Forest Laboratories, Inc. introduced a drug in 2013, namely Vilazodone used for the treatment of GAD. These new antidepressants are anticipated to capture a greater industry share during the forecast period.

This report forecasts revenue growth and provides an analysis of the industry trends in each of the sub-segments from 2014 to 2025. For the purpose of this study, Grand View Research has segmented the anxiety disorder and depression treatment market on the basis of product, indication, and region: