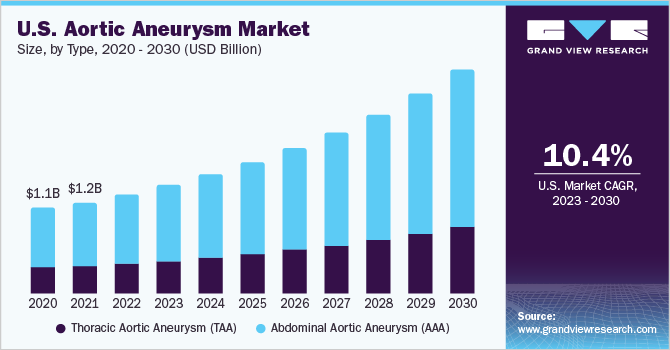 Increasing cases of cardiovascular diseases, rapid adoption of sedentary lifestyles, and unhealthy eating habits are raising the cases of AA across the globe. The rising geriatric population is also adding to the patient pool. According to the U.S. Department of Health and Human Services, this population group in the U.S. was 54 million in 2019, which is almost 16% of the total population. Moreover, this number is projected to reach 80.8 million by 2040 and 94.7 million by 2060. Thus, the rapidly aging population is expected to increase the overall number of AA repair procedures in the next 5 years. All those above 65 years are at a higher risk of developing aortic aneurysms as the walls of the aorta weaken by this age; the risk also increases due to other cardiovascular diseases.

Smoking significantly increases the risk of developing aortic aneurysms. According to the WHO, around 22.3% of the world population used tobacco in 2020. The US Preventive Services Task Force considered smoking a major risk factor associated with AAA among men aged 65 to 75 years who have ever smoked. Continued smoking in individuals with an AAA is associated with both increased rates of expansion and the risk of rupture. Smoking is likely to increase the risk of perioperative death and late mortality among patients who are undergoing surgical AA repair.

Traditionally existing surgical procedures are slowly being replaced by minimally invasive surgeries such as EVAR in most advanced countries such as the U.S., the U.K., and Japan. Traditional surgery requires an incision to access the internal body parts for operation, which require high precision, deep concentration, and expertise in surgical operations. However, the advantages of minimally invasive procedures include less blood loss, limited to no scarring, smaller incisions, and shorter hospital stays with faster recovery times, often with better outcomes. Thus, increasing demand for minimally invasive EAVR procedures is favoring market growth.

The abdominal aortic aneurysm segment dominated the market in 2021 with a revenue share of over 70.0% owing to the increasing incidence of the disease. AAA occurs more commonly in the lower abdomen and most cases of AAA occur either under the kidney or in the pararenal portion of the lower abdomen. Overall, the number of repairs performed is much higher for subrenal and pararenal aneurysms than for TAA. According to an article published in the journal Circulation, around 2.5% of adults over the age of 65 have AAA. On the other hand, TAA only occurs 4.5% to 5.9% per 100,000 person-years.

The steady growth of the TAA segment can be attributed to the low incidence of TAA and the unavailability of advanced devices for its management by endovascular methods. However, with the increasing acceptance of minimally invasive techniques worldwide, coupled with technological advancement to reduce longer hospital stays and the overall treatment cost, this segment is anticipated to gain momentum in the coming years.

The stent grafts segment accounted for the largest revenue share of over 85.0% in 2021. Technological advances in stent-graft design are projected to render substantial growth to the segment during the forecast period. For instance, advanced stent graft systems are being launched with inbuilt imaging and delivery catheter. These devices can be used in situations such as aneurysms and major vascular injuries. Based on the product, the market is bifurcated into stent grafts and catheters.

Nellix and Ovation Stent Grafts are a new generation of prostheses that use polymer technology to treat abdominal aortic aneurysms. CT scans can be done postoperatively. The benefits of stent-grafted intravascular repair continue to fuel the growth of the segment. In September 2021, Terumo Corporation initiated PANTHER, global research on knitted and woven surgical grafts. Such research initiatives by key players are likely to bode well for segment growth.

The EVAR segment held the largest revenue share of over 70.0% in 2021 and is expected to exhibit the fastest CAGR over the forecast period. Increasing acceptance of endovascular treatment worldwide, technological advancement to reduce hospital stays, and the overall morbidity associated with aortic aneurysm repair are primary factors contributing to the growth of the segment. According to Endologix, out of the total procedures performed in the U.S., in 2017, 75% of them were EAVR. Based on treatment, the market is divided into open surgical repair (OSR) and endovascular aneurysm repair (EVAR).

In addition, new product launches are anticipated to propel the growth of the segment. For instance, Endologix's Chimney Endovascular Aneurysm Sealing (ChEVAS) system was approved by the FDA in July 2021. With the Nellix 3.5 endograft and parallel visceral stents, this system is an innovative endovascular therapy for patients with pararenal, juxtarenal, and suprarenal AAA.

The Open Surgical Repair (OSR) segment is estimated to witness moderate growth over the forecast period. Open repair is preferred for treating simple and uncomplicated cases in low-risk patients and for many anatomies of TAA where very limited endovascular options are available. In the emerging economies of Asia, Latin America, and the Middle East, open repair is still considered the method of choice owing to the low cost and unavailability of advanced technology.

The hospital's segment held the largest revenue share of over 70.0% in 2021. Hospitals are the most preferred setting by physicians and vascular surgeons, particularly in developing countries. The elaborate setup in hospitals enables treating complex cases that cannot be managed in ASCs. Along with this, favoring reimbursement policies are expected to drive the segment.

Key players like Terumo Corporation, Medtronic, Endologix LLC, Microport Scientific Corporation, and Cook are mainly targeting hospitals for the distribution of their advanced stent graft systems and other AA repair devices. For instance, Microport distributes around 200 approved products in more than 5,000 hospitals across 80 countries. Similarly, Endologix LLC sells its EVAR products to hospitals in the U.S., Canada, New Zealand, South Korea, and Europe. 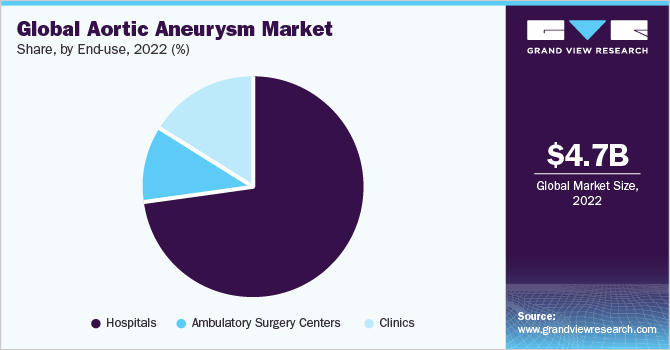 Ambulatory surgery centers are anticipated to witness remarkable growth during the forecast period. This is due to the advantages provided by the ASCs such as shorter hospital stays and lower overall treatment costs. ASC is further expected to grow due to the increased prevalence of AA, particularly in industrialized nations, and the necessity for rapid treatment.

North America held the largest revenue share of over 45.0% in 2021 due to rapid technological advancements, a shift toward minimally invasive procedures, and the rising incidence of AA. The Screening Abdominal Aortic Aneurysms Very Efficiently (SAVE) Act enforced by the U.S. government in 2014 offers one free AAA screening for men who have smoked at least once in their life and women with a family history of the condition. Moreover, high reimbursements offered by the governments are aiding the overall market growth. For instance, Medicare in the U.S. covers one abdominal aortic ultrasound for patients at risk.

Europe is anticipated to account for a significant share during the forecast period due to technological advancements and the high prevalence of atherosclerosis. International organizations such as the National Health Service (NHS) are working toward reducing the incidence of aortic aneurysms. For instance, the Public Health England screening program by the NHS in Europe is a national population screening program that helps identify healthy people who may be at risk of developing an aortic aneurysm. This, in turn, enables early treatment and informed decisions. 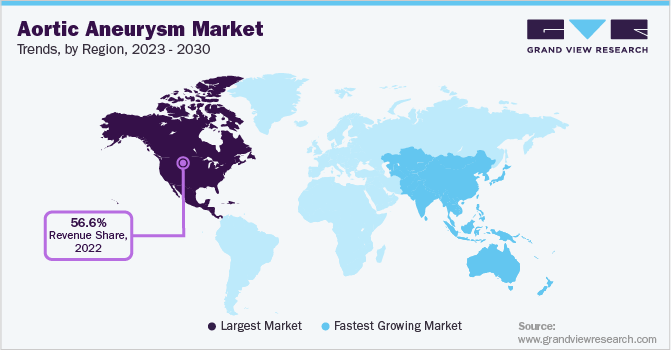 Asia Pacific is expected to witness remarkable growth during the forecast period on account of the rising aging population, the prevalence of cardiovascular diseases and hypertension, and growing disposable income. The Asian Development Bank (ADB) estimates that one in four Asians and Pacificians will be over 60 by 2050. Between 2010 and 2050, the number of older people in the region will triple, reaching about 1.3 billion. Thus, the presence of a sizeable aging population is favoring the growth of the market in the Asia Pacific.

The market is moderately fragmented with a majority of mid-and small-sized companies. Mergers & acquisitions are among the key strategies adopted by most players to strengthen their position. For instance, in November 2019, Terumo Corporation acquired Aortica Corporation, a firm based in the U.S. dedicated to developing the science of individualized vascular therapy. Aortica has developed Aorta Fit, an automated case planning software that accurately aligns the fenestration on the endograft to the unique location of each patient's branch artery during fenestrated intravascular aortic repair (FEVAR). Some prominent players in the global aortic aneurysm market include:

This report forecasts revenue growth at the global, regional, and country levels and provides an analysis of the latest industry trends and opportunities in each of the sub-segments from 2016 to 2030. For this study, Grand View Research has segmented the global aortic aneurysm market report based on type, treatment, product, end-use, and region: 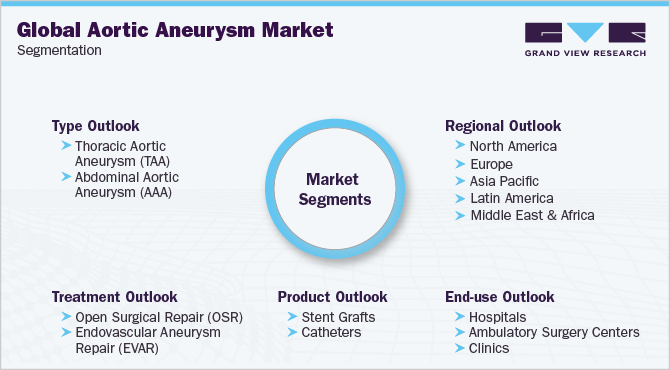 What is the aortic aneurysm market growth?

Which segment accounted for the largest aortic aneurysm market share?

b. North America dominated the aortic aneurysm market in 2021. This is attributable to strategic presence of prominent players, rapid adoption of latest technology, and favorable reimbursement coverage

Who are the key players in the aortic aneurysm market?

What are the factors driving the aortic aneurysm market?

b. Key factors that are driving the market growth include a rising geriatric population (aged 65 & above) with weakened aortic walls, a growing number of chain smokers, and increasing adoption of minimally invasive endovascular procedures

How big is the aortic aneurysm market?