The global aprotic solvents market size was valued at USD 15.23 billion in 2015. It is expected to grow at a significant CAGR over the forecast period owing to growing demand from various end-use industries such as oil & gas, pharmaceuticals, paints & coatings, and electronics. The growing use of bio-based products is expected to further drive the market.

Growing demand for aprotic solvents in the oil & gas industry is expected to play a key role in the overall growth of the market. Oil & gas is a source of power, the consumption of which, eventually determines the strength of a country’s economy.

The pharmaceutical industry is projected to be the fastest-growing application sector over the forecast period. This industry is also witnessing growing demand for environment-friendly products, due to stringent regulations pertaining to environment protection.

Some of the majorly used aprotic solvents include chemicals such as N-Methyl-2-pyrrolidone (NMP), toluene, benzene, acetone, hexane, chloroform, and so on. The aprotic solvents industry was dominated by toluene in 2015 accounting for more than 15% of revenue share.

Toluene can also be used as a raw material to produce other chemicals such as xylene, benzene, and trinitrotoluene (TNT). Growing demand from end-use industries such as paints & coatings and pharmaceuticals is expected to drive the market for toluene over the forecast period. It is an inflammable and colorless liquid, that resembles the appearance of paint thinner.

N-Methyl-2-pyrrolidone (NMP) is one of the widely used aprotic solvents in the industry. As seen above, this product has found a major application in the oil & gas industry. This is due to the property to dissolve a wide range of metals, making it an ideal solvent in the plastic industry too. This product is projected to witness the highest CAGR over the forecast period.

Oil & gas, pharmaceuticals, paints & coatings, and electronics were some of the major application areas of aprotic solvents in 2015. The oil & gas industry was the largest consumer of these solvents in the same year, followed by the pharmaceutical industry. The oil & gas industry was dominated by the U.S., Russia, and the Middle Eastern countries. These are the major exporters of these products to other countries. 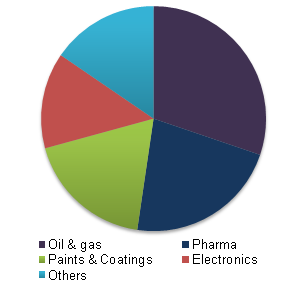 The demand for these solvents from the pharmaceutical industry is projected to grow at the highest CAGR of over 4% from 2016 to 2025. This is due to increasing innovations in the pharmaceutical industry, giving rise to new drugs. Besides, increasing use of green and environment-friendly aprotic solvents has also propelled the growth of this market.

Asia Pacific is projected to be the fastest-growing region with a CAGR of 4.2% from 2016 to 2015. The industry in this region is growing courtesy rapidly developing economies such as China, India, and South Korea. The growth of the market in this region is attributed to growing end-use industries such as paints & coatings, electronics, and pharmaceuticals.

The Asia Pacific region is home to some of the major paints & coatings companies such as Nippon Paint and Asian Paints. Similarly, major electronic companies such as Samsung, Sony, Nikon, and Hitachi are also headquartered in this region. Thus, owing to growing demand from these industries, the market for aprotic solvents is expected to witness significant growth.

North America accounted for the second-largest share in 2015. The industry in this region is dominated by the U.S. which held a share of over 70% in the same year. This region has witnessed a resurgence in several industries including oil & gas, automobile, construction, and electronics among others, since the economic slowdown from 2007 to 2009. This has provided the necessary boost to the industry.

The industry is fragmented in nature with several manufacturers scattered across the globe. The key players include Eastman Chemical Company, BASF SE, Ashland, Mitsubishi Chemical, and Asahi Kasei.

Agreements, partnerships, joint ventures, and collaborations were some of the major development strategies adopted by the players from 2011 to 2016. In June 2014, Linde and BASF entered into an agreement to develop the butadiene technology, jointly. This agreement was in accordance with the growing demand for butadiene globally.

Grand View Research has segmented the global aprotic solvents market on the basis of product, application, and region:

How big is the aprotic solvents market?

What is the aprotic solvents market growth?

Which segment accounted for the largest aprotic solvents market share?

b. Asia Pacific dominated the aprotic solvents market with a share of 43.8% in 2019. This is attributable to growing end-use industries such as paints & coatings, electronics, and pharmaceuticals.

Who are the key players in aprotic solvents market?

What are the factors driving the aprotic solvents market?

b. Key factors that are driving the market growth include growing use of bio-based products and growing demand for aprotic solvents in the oil & gas industry.