The global aptamers market size was valued at USD 723.6 million in 2016 and is projected to grow at a CAGR of 28.2% during the forecast period. Nowadays, this small multifunctional molecule is a widely studied biomedical class amongst scientists across the globe owing to various advantages offered by it over well-established antibodies. For example, unlike antibodies, this drug is directly tested for in-vivo procedures and completely bypass the in-vitro testing method. This eliminates majority of time involved in benchmark testing and saves around 35% of the cost & several years of R&D during the production of these molecules. Further, factors such as high thermal stability, lesser chance of provoking undesired immune responses, and cost-efficiency provide added advantages to boost its usage. In addition, many research activities concluded that functional mechanism or medication method of aptamer molecule is closely similar to antibodies. These factors have attracted a large number of companies to invest in this market.

In addition, there has been tremendous growth in number of companies exploring the potential of this molecule across a diverse area of medical applications. According to the estimates published by open access journal Multidisciplinary Digital Publishing Institute (MDPI AG), in 1995, there were not more than 200 research articles on these molecules. Compared to this, there are more than 1800 research articles published by various companies on aptamer assays or therapeutics. It has been observed that many small-scale enterprises or startup companies have significantly increased their influence during the past few years to capture the untapped potential. Companies such as Aptamer Group, Aptamer Sciences, Inc., Optech Biotech, Aptagen, LLC, and others have established a significant presence in this market.

The market is also expected to grow due to advancements in technologies, i.e., Systemic Evolution of Ligands by Exponential Enrichment (SELEX) process. The traditional SELEX process is time-consuming and involves iterative steps of probe selection and amplification. This slows down the selection process. Thus, to overcome this disadvantage, SOMALOGIC, INC. developed a next-generation selection platform (i.e., SOMAmer). As compared to traditional selection platforms, this platform has an ability to extract high-quality aptamers for a more diverse range of applications. These advancements are anticipated to fuel utilization of these products, leading to market growth. Other factors such as government support in developed regions (North America and Europe), rising awareness by manufacturers, and promising pipeline are anticipated to support future growth.

On the other side, lack of proper regulatory guidelines on molecule development hampers the overall growth. For example, despite the approval of Macugen and rising number of research activities in this field, the government regulatory authorities have not issued formal guidelines to explicitly address the quality expectation of aptamers. In addition, in developing countries of Asia Pacific and Middle East & Africa, the awareness about these molecules and their advantages is at a very low level. All these factors may collectively pull down growth to some extent.

Companies such as Ophthotech Corporation, NOXXON Pharma, and others are currently investigating nucleic acid-based aptamers for various purposes. For example, Ophthotech Corporation’s Fovista, a chemically synthesized nucleic acid aptamer, is currently under clinical investigation. This drug has shown promising safety and efficacy results in phase 2b clinical studies. Approval of such types of nucleic acid products may support the growth of this segment during the future period.

In contrast, the peptide type is considered to be a low revenue generating segment. However, many companies have started investing in the peptide aptamers market, which provides a healthy platform for the growth of this segment. For instance, Aptagen, LLC developed Peptimers, which are peptide-based aptamers. Unlike nucleic acid-based aptamers, Peptimers are composed of amino acid building blocks, which increase the affinity of ligands. Such product launches support constant growth of this type segment.

Out of various applications, the diagnostics segment dominated the market in 2016. Growing demand for aptamers for biomarker discovery, molecular imaging, and other diagnostic purposes has contributed to the growth of this application segment. In addition, many research studies have identified the potential of this molecule for the diagnosis of various chronic diseases.

An article by the Brazilian Journal of Infectious Diseases (December 2016) detailed the use of DNA/RNA aptamers for the efficient diagnosis of parasitic diseases. This fact has made aptamer a natural choice amongst hospital diagnosticians and researchers for diagnostic purposes, which is expected to drive growth.

Therapeutic applications may witness rapid growth over the coming years and are projected to grow with a CAGR of 30.6%. This molecule exhibits several advantages as therapeutic moiety compared to antibody drugs. Unlike antibody drugs, this chemically synthesized molecule binds 1,000 times stronger and offers higher stability to the target proteins. Thus, many companies are researching on the role of aptamers for disease treatment, such as neurodegenerative, cardiovascular, HIV, and various cancers. This is expected to make aptamer a driving force in the future of medicine.

Developed regions, North America & Europe, dominated the global market and captured more than 79% share during 2016. North America is considered to be the highest revenue generating market with an approximate revenue share of 51% in 2016. The growth of the North America market can be majorly attributed to the constant technological advancements in technologies and increasing number of companies coupled with rising R&D activities in this area. The U.S. is the largest market in the region owing to favorable government initiatives and increasing number of research laboratories. 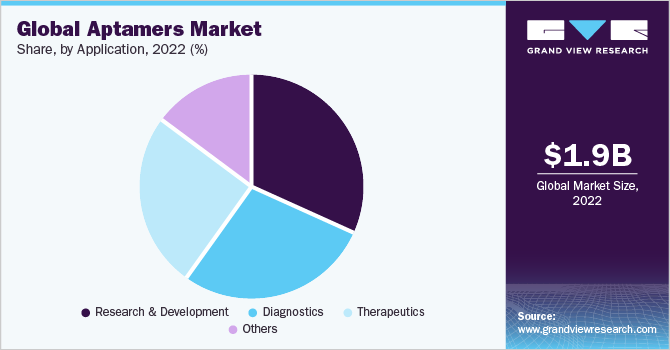 Europe is expected to be at the forefront and evolve rapidly over the coming years. Factors responsible for growth are the growing acceptance of emerging aptamer technologies, rising incidence of chronic diseases, and increasing demand for aptamer-based therapeutics in European countries.

Asia Pacific aptamers market is growing at a lucrative CAGR of 27.9% during the forecast period. Japan and China are considered to be the most promising countries for the growth opportunities in the Asia Pacific region. Increasing incidence of chronic diseases coupled with growing demand for cost effective therapeutics augments the market growth in this region.

The global market is characterized by the presence of companies such as Aptamer Group; Aptamer Sciences, Inc.; Base Pair Biotechnologies, Inc.; NOXXON Pharma; SomaLogic, Inc.; Ophthotech Corporation; and many others. Apart from this, private organizations, academic institutes, and government laboratories have a significant influence on the market dynamics. These companies are engaged in rigorous R&D activities to introduce novel aptamers for a wide range of medical applications.

Along with this, pharmaceutical giants such as Eli Lilly & Company, Merck & Co., Inc., and others invest substantially in oligonucleotide therapy. It has been observed that these companies are undertaking constant efforts to collaborate with small-scale manufacturers to expand their presence.

This report forecasts revenue growth and provides an analysis on the industry trends in each of the sub-segments from 2014 to 2025. For the purpose of this study, Grand View Research has segmented the aptamers market on the basis of types, application, and region: