The global arbitrary waveform generator market size was valued at USD 304.7 million in 2018 and is expected to register a CAGR of more than 9% over the forecast period. The market growth can be attributed to the growing demand for advanced test and measurement equipment across numerous sectors such as healthcare, aerospace & defense, telecommunications, education, and consumer electronics. The augmented demand for these generators in the commercial sector is principally due to the superior integrity offered by DDS integrated circuits. The growing penetration of internet and the growing demand for communication technologies across the globe has further exerted a positive influence since numerous communication devices in the IoT ecosystem require arbitrary waveform generators (AWGs) for their testing.

Substantial investments in various sectors, especially healthcare and aerospace & defense, have led to the development of technologically advanced equipment. Such sophisticated equipment require extensive testing procedures. This is significantly contributing to the AWG industry growth over the forecast period. Additionally, these new-age generators are increasingly being preferred over conventional generators owing to their benefits such as enhanced performance of the equipment and cost-effectiveness offered for computing applications. The use of such sophisticated generators helps reduce the overall operating cost in the manufacturing sector and overcome several limitations associated with conventional generators. 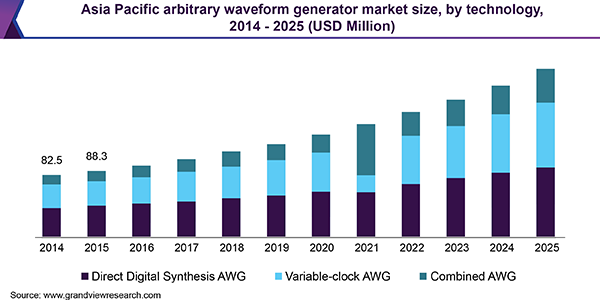 Continuous technological breakthroughs in various sectors are necessitating the testing, measurement, and monitoring of electronic devices, ultimately resulting in the growing utilization of AWGs. Multiple wireless technologies, including LTE, WCDMA, and GSM, use waveform generators to obtain high accuracy, minimal noise, and frequency stability in wireless communication networks. Additionally, the growth in IoT platforms is also compelling the manufacturers to use AWGs owing to various benefits such as flexibility, fidelity, and ease of use. The current, web-driven era is instigating the demand for high-speed coherent optical solutions.

A majority of the optical applications require phase modulation and high sample rate, baud rate, bandwidth, and resolution. As a result of this, the applications require multiple and synchronized AWGs for generating the desired coherent optical signals. This is further driving the product demand. Rapid advancements in technologies such as Multiple Input and Multiple Output (MIMO) is propelling the need for these generators, in order to generate high-accuracy signals. MIMO is primarily used in the wireless communication sector. It enables enhancements in data throughput without the need for installing multiple equipment and is thus, widely used in the communication sector. This is expected to create immense growth opportunities for market players over the next six years.

Based on product, the market is segmented into single-channel AWG and dual-channel AWG. The dual-channel AWG segment is expected to emerge as the highest revenue generating segment by 2025. These generators are increasingly being preferred over their counterparts to serve a wide range of applications. The growing preference for this type can be attributed to benefits such as better synchronization as compared to single-channel variants and the ability to combine the output of both the channels. Manufacturers are increasingly considering the production of these generators owing to their broad applicability in a wide range of AWG industry verticals.

The single-channel AWG segment is anticipated to grow at a substantial CAGR over the next six years. Advantages associated with the use of single-channel AWG, such as cost-effectiveness as compared to the dual-channel variants, are leading to increased adoption of these AWGs. The demand for this type is also increasing owing to the presence of a user-friendly interface. Additionally, such generators are being widely used in communication systems, which require narrowband channels.

Based on technology, the market is segmented into direct digital synthesis, variable-clock, and combined AWGs. The combined AWG segment is expected to exhibit the fastest growth over the next six years. They form a combination of both, DDS and variable-clock technology, and thereby, exhibit the advantages of both technologies in a single unit of test equipment. These generators are expected to gain immense popularity over the next six years across a variety of sectors, where specialized waveforms are required.

The revenue generated by the Direct Digital Synthesis (DDS) AWG segment was estimated to be almost USD 140 million in 2018 and the segment is projected to witness substantial growth from 2019 to 2025. The technology has been a preferred choice for waveform generation over the past few years. The benefits offered by this technology include enhanced ability to perform real-time frequency sweeps, convenient usage, and cost-effectiveness. Additionally, most manufacturers prefer the DDS technology for waveform generation owing to its constant clock rate. The constant clock rate allows them to use high-performance and cost-effective filters for the removal of digital artifacts from the output signals.

Based on application, the arbitrary waveform generator (AWG) market is categorized into telecommunications, education, healthcare, electronics, industrial, and others. The telecommunications segment is anticipated to generate the highest revenue, surpassing USD 120 million, by 2025. The industry is witnessing an increase in the demand for AWGs for testing complex semiconductor components, which are embedded in the electronic devices used in wireless technologies. Furthermore, modern communication systems, such as Wi-Fi and LTE, also require testing. This is expected to drive the demand for these generators in the telecommunications sector. 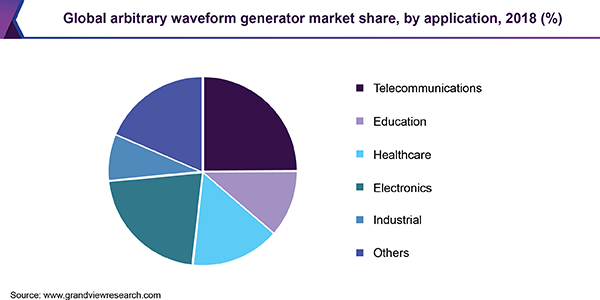 The education segment is expected to emerge as the fastest-growing application segment, exhibiting a CAGR of over 11% from 2019 to 2025. Increasing use of AWGs by lab managers and professors in institutions and universities for signal measurement of various equipment is expected to drive the industry growth. Key features such as ease of use, compact size, and a relatively large screen display are expected to drive the adoption of AWGs in the education sector. The large screen displays sweep parameters and relevant waveforms in a single glance.

Based on region, the market is segmented into North America, Europe, Asia Pacific, Latin America, and MEA. Asia Pacific dominated the overall market in 2018 and is expected to continue to dominate & emerge as the fastest-growing region over the next six years. The region is increasingly witnessing a rise in demand for testing and measurement equipment, especially in the consumer electronics and aerospace & defense sectors. Additionally, the availability of low-cost skilled labor, along with low manufacturing cost, is expected to contribute significantly to revenue generation in the region.

Europe is expected to witness significant growth over the forecast period. The region has been witnessing immense growth in the smart factory and industrial IoT arenas. These areas require testing & measurement equipment to a great extent for monitoring and processing data. This growing demand for testing & measurement equipment is expected to offer considerable business opportunities for AWG manufacturers/suppliers in the region. Additionally, the electronics sector has been also witnessing a growth in demand for testing equipment in the region over the past few years.

The competition in the global AWG market is intense owing to its consolidated nature, where a few players hold a strong position in the market. B&K Precision Corporation, DynamicSignals LLC, Fluke Corporation, Keysight Technologies, National Instruments, Tektronix Inc., Rohde & Schwarz, and Teledyne LeCroy are the key players in the market. The AWG industry has witnessed several partnerships and collaborations in the recent past. In April 2019, Keysight Technologies and Telia (Finland) announced a collaboration to speed up the deployments of commercial 5G New Radio (NR). Similarly, in July 2018, National Instruments and Spirent Communications announced a strategic collaboration for 5G performance test solution. Such partnerships are anticipated to create immense opportunities for market growth.

The market is characterized by the presence of a large number of domestic and international players. This has compelled market participants to offer their products at affordable prices. New product development is one of the prominent strategies implemented by the key players to gain a competitive edge. In January 2017, B&K Precision Corporation launched 4050B series of dual-channel arbitrary/functional waveform generators that offered better square wave performance, along with improved functionality and specifications.

This report forecasts revenue growth at the global, regional, and country levels and provides an analysis of the latest AWG industry trends in each of the sub-segments from 2014 to 2025. For the purpose of this study, Grand View Research has segmented the global arbitrary waveform generator market report on the basis of product, technology, application, and region: