The global armored vehicle market size was valued at USD 25.5 billion in 2018 and is expected to exhibit a CAGR of 5.4% from 2019 to 2025. The market has witnessed considerable growth owing to the increasing focus on safeguarding soldiers from external and internal threats. Growing awareness about commercial security is also expected to drive demand for various armored vehicles over the forecast period.

Multilateral collaboration between countries such as North Atlantic Treaty Organization (NATO) and the African Union to counter terrorism and maintain peace is also expected to favor market growth. The market is also anticipated to be driven by various governments opting for the latest machinery to counter emergencies caused by insurgencies and militant attacks. Moreover, increasing communal riots and organized crimes in regions such as the Middle East and Africa as well as Asia Pacific are expected to drive market demand. 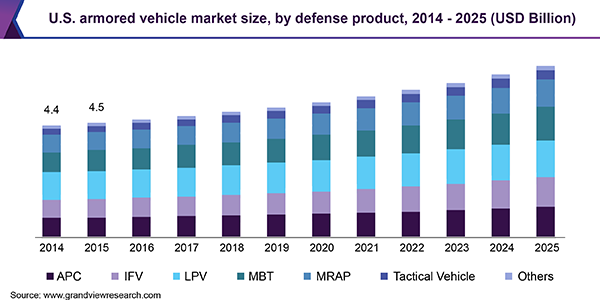 Increasing defense budgets, particularly in Asia Pacific, is anticipated to boost the market growth. The goodwill of industry participants is expected to play a key role in contract allotments. Advancements such as increased fuel efficiency and the use of high-tech sensors are expected to drive the market over the next few years.

Increasing cross-border criminal activities and terrorism have triggered asymmetric warfare between different nations across the globe and this is expected to further increase product demand. The development of lightweight, robust, highly efficient, and compact armored vehicles suitable for defense operations is further expected to keep growth prospects upbeat.

Limited budget for military spending, particularly in the North American and European regions, may pose a challenge to industry growth over the forecast period. Additionally, rising prices of raw materials, components, vehicle assembly, and machining equipment are expected to hinder the growth of the market.

The growing need to protect military personnel from mine attacks is expected to drive demand for mine-resistant ambush-protected automobiles over the coming years. Tactical military carriers are designed primarily for use by military forces. Armored personnel carriers are primarily used for safer deployment of infantry on battlefields or high threat areas.

On the basis of application, the market is segmented into defense and commercial. The defense segment dominated the market in 2018 and was valued at USD 20.5 billion. Growing concerns for governments to safeguard soldiers’ lives during civil wars, riots, or domestic terrorism are anticipated to drive the defense segment over the forecast period. 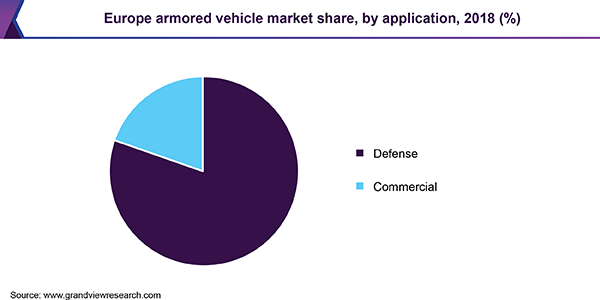 Commercial applications of armored vehicles include VIP protection, armed convoys, and patrols. Rising demand for rental and leasing protected van services owing to increasing awareness about personal safety is also expected to favor the growth of the commercial segment over the forecast period. Additionally, owing to soaring crime rates across countries, organizations and banks are opting for protected trucks or vans to carry valuables, transfer money from banks to ATMs, and transfer cash collected at large commercial establishments to banks.

Asia Pacific generated the highest revenue of USD 7.9 billion in 2018. This can be attributed to government initiatives undertaken to strengthen military power to counter internal or external terrorism. Furthermore, various government bodies are making considerable investments to develop the defense sector across the region.

Countries such as India, South Korea, and China are making investments in procuring and developing advanced armored vehicles. These factors are expected to drive market demand over the forecast period. For instance, in February 2018, South Korea announced its decision to establish a research center to develop navigation algorithms for unmanned armored vehicles and AI-based smart object recognition and tracking technology.

Manufacturers in Asia Pacific are also significantly investing in research and development activities to develop advanced and hybrid armored vehicles for enhanced maritime and border patrolling. Additionally, increasing military expenditures and growing demand for medium-sized, light armored vehicles for patrolling operations is expected to boost regional growth over the next few years.

These players have been making investments in new product development to gain a competitive advantage. In 2014, Rheinmetall AG invested USD 242.28 million for research and development. In May 2015, Rheinmetall AG, PolskaGrupaZbrojeniowa SA, Obrum, the company’s subsidiary, signed a cooperative agreement to develop a new amphibious 6X6 armed automobile for the Polish military.

In April 2015, BAE Systems implemented an active damping system upgrade to the CV90 combat automobile, thus increasing its agility by reducing the automobile’s pitch acceleration by approximately 40%. In December 2014, the company also announced that it received a contract worth USD 1.2 billion from the U.S. army for armored multi-purpose automobiles.

This report forecasts revenue growth at global, regional, and country levels and provides an analysis of the latest industry trends in each of the sub-segments from 2014 to 2025. For the purpose of this study, Grand View Research has segmented the global armored vehicle market report on the basis of application, product, and region: