The artemisinin combination therapy market size was valued at USD 363.8 million in 2017. It is projected to expand at a CAGR of 8.5% during the forecast period. There has been a tremendous upsurge in the demand for artemisinin combination therapy (ACT) over the past few years following its recognition as first line treatment for malaria by the World Health Organization.

ACTs are the most effective antimalarial medicines available today. Currently, the WHO recommends 6 ACTs for the treatment of malaria. In recent years, access to them has increased considerably. By 2016, they were adopted as first-line treatment in almost 80 countries. Their benefits include fast action, high efficacy, and reduced possibility of developing resistance. 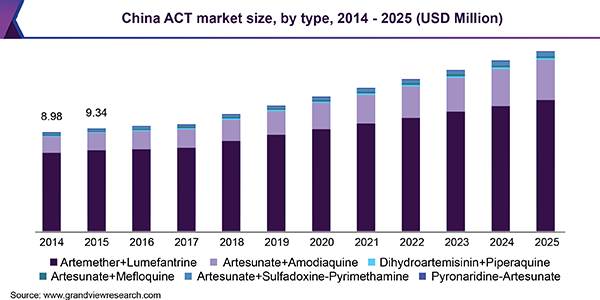 Pipeline for new antimalarial drugs is rising and some of them have been introduced recently. Some of the new ACTs, which are registered and used in some countries, are arterolane-piperaquine, artesunate-pyronaridine, artemisinin-piperaquine base, and artemisinin-naphthoquinone.

Rising R & D activities and improving medical infrastructure, mainly in developing economies including India and China, are stimulating the growth of the market. Increasing demand from malaria endemic countries such as Uganda, Nigeria, Congo, and other South-East Asian countries is likely to drive the market during the forecast period.

Malaria is one of the most distressing diseases globally with around 250 million new cases reported each year. According to findings of the Medicines Malaria Venture (MMV), in 2016, of the estimated 445,000 deaths caused by malaria worldwide, 91.0% of them occurred in Africa.

Malaria epidemic is on a rise and climate change is further rendering surroundings conducive for vector mosquitoes to thrive. Around 40.0% of the global population is at risk of infection and while over 90.0% of cases occur in Africa, the new frontier of the disease in South East Asia, where 83.0% of the population (over 1.3 billion people) are at risk. According to WHO, together with tuberculosis and HIV, malaria is one of the most prevalent diseases in Africa and the leading cause of death in children under 5-year-old.

Malaria during pregnancy poses a significant amount of health risk to unborn children and mothers. It can lead to severe outcomes, such as anemia, low infant birth weight, and abortion. Several studies to evaluate the safety and efficacy of ACTs in pregnant women have been conducted. According to a study conducted by Novartis in collaboration with the WHO, it was found that exposure to artemether-lumefantrine in pregnancy is not related to specific health risks in terms of malformations, perinatal mortality, or developmental impairment. 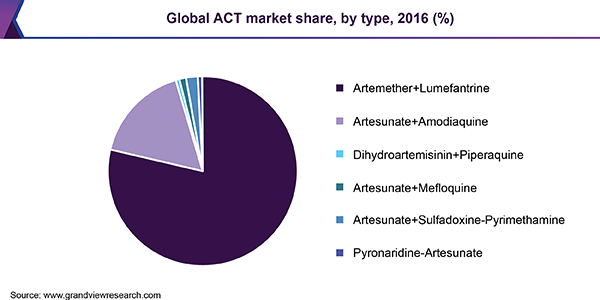 It was the first ACT to be launched and prequalified by WHO for its efficacy, safety, and quality. It is available in more than 60 countries and is the only ACT approved by the U.S. FDA. On the other hand, DHA PPQ is estimated to be the fastest-growing segment during the forecast period.

The Middle East and Africa held the largest share in the artemisinin combination therapy market in 2017. The presence of large production base of artemisinin herbs and rising demand in malaria endemic countries are contributing to the growth of the market in MEA and Asia Pacific. Though African countries, where the incidence of malaria is the highest, have increased malaria control strategies, effective treatment, and control, it still presents a huge logistical difficulty. As several at-risk people live in extreme poverty in remote areas, WHO and other organizations are working on completely eradicating it in Africa, and thus, over the coming years, the adoption rate of ACT is further expected to increase.

This report forecasts revenue growth at global, regional & country levels and provides an analysis of the industry trends in each of the subsegments from 2014 to 2025. For the purpose of this study, Grand View Research has segmented the artemisinin combination therapy market report based on type and region: