The global artificial pancreas device systems market size was valued at USD 207.27 million in 2021 and is expected to expand at a compound annual growth rate (CAGR) of 18.94% from 2022 to 2030. The increasing prevalence of diabetes, intensive R&D efforts by industry players, and rising demand for automated systems for glycemic control are the factors driving the industry growth. Artificial pancreas device systems (APDS) control the blood glucose level in diabetes patients, and industry players are conducting numerous researches for better diabetes management. These devices are less invasive and hence, are largely adopted by the patient pool. The growth of the market is majorly attributed to the increasing geriatric population, growing incidence of diabetes, and the rising prevalence of obesity. 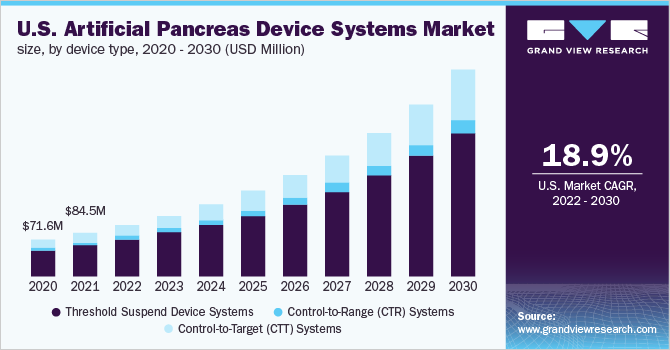 Bionic Pancreas system, technological developments, such as in-home use of Bionic Pancreas system are also anticipated to create significant growth opportunities in the near future. Furthermore, increasing awareness about APDS and their use has also led to market growth in both developed and developing countries.

The outbreak of COVID-19 is estimated to contribute to the market growth in the times to come. However, disturbed logistics and changed equation in international trading have significantly affected the business growth. As many parts of different economies have started to ease the lockdowns and have started construction of a strong distribution network to regain losses and avoid discontinuation in business market players, the market demand for APDS is expected to surge. Moreover, hyperglycemia and obesity are linked to COVID-19 mortality in persons with diabetes. Additionally, COVID-19 recovered diabetes patients have developed resistance to insulin, and the traditional injections fail to provide proper management. APDS can replace the need for frequent sugar level checks. Furthermore, globally increased activities in teleconsultancy for follow-up and routine check-ups during the pandemic are likely to improve market growth for point of care technologies such as APDS. Thus, the trends are expected to have a significant impact on the adoption of APDS in upcoming years.

The increasing incidence of diabetes due to aging, obesity, and an unhealthy lifestyle is one of the key factors contributing to the growth of artificial pancreas device systems market. Risk factors, such as obesity and overweight, are leading to an increase in the incidence of diabetes. According to WHO, in 2016, over 1.9 billion adults were overweight, of which, around 650 million people were obese. These factors are expected to boost the prevalence of diabetes, thus fueling the need for APDS. Additionally, as per the same source, the total number of people with diabetes is likely to rise from 171 million in 2000 to 366 million in 2030. Moreover, the prevalence of diabetes is increasing in low and middle-income counties, which is anticipated to create huge growth opportunities for market players in these untapped markets. Furthermore, the increasing dependency of type 2 diabetes on insulin is expected to create opportunities for the artificial pancreas devices market during the forecast period.

The U.S. dominated the artificial pancreas device systems market with the highest shares of 88.50% in 2021. High per capita income and increasing healthcare spending are among the key factors likely to drive the global artificial pancreas device systems market growth. According to the American Diabetes Association, in 2019, the average estimated cost of diabetes-specific treatments per person was USD 9,505.60. In the U.S., a diabetic patient can incur an overall medical expenditure of nearly USD 16,750 per year. Furthermore, the adoption of smart devices and technological advancements such as the use of AI & data analytics are propelling the industry growth. According to International Diabetes Federation, one in eight adults suffer from impaired blood glucose tolerance. This ratio is expected to increase further during the forecast period.

In addition to above, automated systems for glycemic control include a variety of devices such as artificial pancreas, insulin pumps, and insulin pens. The demand for these devices is on the rise owing to the flexibility, accurate dosage, automatic detection of glucose levels, short and rapid-acting insulin, and convenient usage. The presence of large base of children and geriatric population within the target customer group is supporting the need for the product. Based on the data given by News Medical, the artificial pancreas system showed better control of blood glucose than the usual method of diabetes management in children. Furthermore, efforts by healthcare organizations such as WHO to provide a better life and improve the standard of care are expected to drive the adoption rate of artificial pancreas device systems. 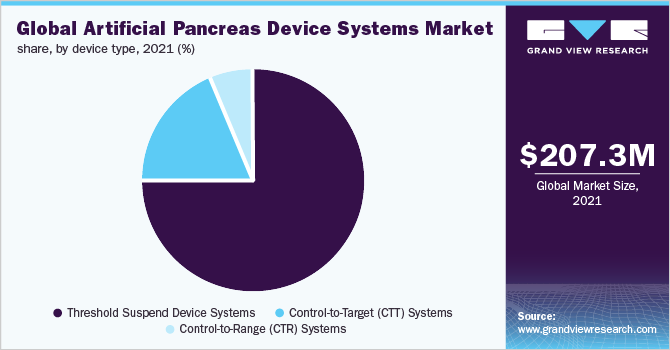 Whereas the Control-to-Target (CTT) systems segment is expected to witness exponential growth throughout the forecast period. The CTT systems are fully automated and require no intervention on the patient’s part for the administration of insulin or for the monitoring of glucose levels. Therefore, the CTT system is expected to gain higher momentum during the forecast period. Furthermore, according to the International Diabetes Federation (IDF), over 537 million adults are living with diabetes across the globe in 2021. This figure is predicted to rise to 643 million by 2030 and 783 million by 2045. In 2021, around 6.7 million deaths were due to diabetes. Thus, owing to the large base of the diabetic population and increasing diabetes prevalence, the demand for CTT systems is likely to boost during the forecast period.

North America dominated the market for artificial pancreas device systems and accounted for the largest revenue share of 46.08% in 2021. Increasing prevalence of obesity, the presence of efficient reimbursement policies, and growing awareness about advanced technologies in diabetes management are also expected to drive the region. Furthermore, the presence of major players, high treatment costs, technological advancement, and product launches are also expected to drive the regional market. Moreover, the rising diabetic population globally has attracted research investments from private and public organizations towards diabetes management. For instance, in 2019, the National Institutes of Health (NIH) invested in collaboration with four institutions to support the development of closed-loop insulin delivery technology for pregnant women with type 1 diabetes. Such factors are estimated to boost the adoption of APDS in the region.

The Asia Pacific artificial pancreas device systems market is expected to register lucrative growth during the forecast period. Increasing healthcare funding and government initiatives to spread awareness about diabetes are major factors aiding growth in this region. According to the International Diabetes Federation, India and China account for the largest number of diabetes patients in the world. Most of the countries in this region are developing countries and the increase in obesity cases and growing socio-economic changes have fueled the occurrence of type I and type II diabetes. Despite the growing prevalence of diabetes, the health expenditure on the disease was considerably less. Furthermore, the adoption of new technology in developing economies is also anticipated to boost the market.

Key market players are involved in adopting strategies such as mergers and acquisitions, partnerships, and the launch of new technologically advanced products and services to strengthen their foothold in the market. They are significantly investing in R&D activities to manufacture technologically advanced products. For instance, in June 2020, Medtronic received CE-Mark for its MiniMed 780G. The device automatically adjusts basal insulin rates after every five minutes and is suitable for diabetic patients between 7 to 80 years of age. Similarly, in September 2020, the U.S. FDA approved a next-generation hybrid closed-loop insulin delivery system for children aged 2 to 6 years with type 1 diabetes. Some of the prominent players in the global artificial pancreas device systems market include:

This report forecasts revenue growth at the global, regional, and country levels and provides an analysis of the latest industry trends in each of the sub-segments from 2017 to 2030. For this study, Grand View Research has segmented the global artificial pancreas device systems market report based on device type and region:

How big is the artificial pancreas device systems market?

What is the artificial pancreas device systems market growth?

b. North America dominated the artificial pancreas device systems market with a share of 46.08% in 2021. This is attributable to the presence of sophisticated healthcare infrastructure, high patient awareness levels coupled with relatively higher healthcare expenditure levels.

Who are the key players in the artificial pancreas device systems market?

What are the factors driving the artificial pancreas device systems market?

b. Key factors that are driving the artificial pancreas device systems market growth include the increasing prevalence of diabetes due to aging, obesity, and unhealthy lifestyle, intensive R&D efforts by industry players, and rising demand for automated systems for glycemic control.