The Asia Pacific biopharma excipients market size was estimated at USD 473.72 million in 2017. It is projected to progress at a CAGR of 6.63% during the forecast period. High R&D investments in biosimilars coupled with the patent expiration of top-selling biologics are anticipated to drive the market. Stringent manufacturing requirements need to be fulfilled to ensure high cell viability and a consistent yield of biologics. The need for excipients that can improve process yield by mitigating risks in biological production is facilitating the search for novel products. 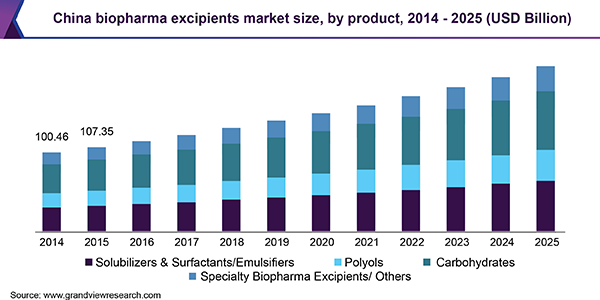 Advancements in drug discovery & development technology, the introduction of complex bioactive & large biomolecules, and the growing significance of biologics for the treatment of life-threatening diseases are unfolding ample growth opportunities for the market. Maintenance of stability during processing and product storage is a major challenge faced by biopharma manufacturers.

Excipients are an integral part of biopharmaceuticals and thus, need to provide a well-defined functionality. Excipients used in biopharmaceuticals require specific properties, which would aid in ensuring product stability. From 2020 to 2030, patents for 17 biologics are expected to expire, thus propelling the biosimilars market.

Asia Pacific holds substantial potential for biosimilars owing to the growing geriatric population, changes in lifestyle, and increasing urbanization. These factors are contributing to a high incidence of non-communicable diseases such as diabetes, cancer, and autoimmune disorders. A wide patient base with unmet needs in Asia coupled with the rising penetration of market participants is encouraging R&D activities related to biosimilars in the biopharmaceutical industry.

In addition, several biopharma manufacturers, who are potential customers for the market, have their manufacturing units in Asian countries. International biopharma players are involved in shifting their manufacturing and R&D operation sites to these countries owing to the presence of a significant cost advantage offered in the value chain. Spiraling demand for biosimilars is, in turn, bolstering the demand for novel excipients.

Based on their functionality & molecular group, biopharma excipients are segmented into solubilizers & surfactants/emulsifiers, polyols, carbohydrates, and specialty excipients. Carbohydrates accounted for the largest revenue share in 2017 owing to the availability of a broad range of products. Advancements in technology are enabling manufacturers to improve the desired properties of these molecules for use with bioactive compounds.

High purity carbohydrates such as trehalose are being rapidly adopted in the development of biosimilars due to their ability to enhance the yield of the final product, stabilize various biologics, prevent aggregation, and improve the entire process of biopharmaceutical manufacturing. The most commonly used carbohydrates for protein stabilization are dextrose, sucrose, and starch. Other carbohydrate excipients include trehalose, maltose, galactose, and mannose.

The rapid adoption of polyols as isotonicity agents and/or stabilizers in both lyophilized and liquid formulations is poised to increase the sales volume of these products. Most therapies based on biomolecules are lyophilized to prevent aggregation and degradation. All lyophilized formulations use one or the other polyol. Sorbitol (polysorbate 80 & polysorbate 20) and mannitol are the most widely used polyols.

Japan dominated the Asia Pacific biopharma excipients market in 2017, owing to better quality products placed at a higher price. An increasing number of contract research organizations (CROs) in the country that support international players with research and approval of biopharmaceuticals is also playing an instrumental role in the development of the market. However, Japan’s pharmaceutical business is anticipated to witness a decline due to a lower share of biopharmaceuticals, which remains unchanged is likely to limit revenue generation in the Japanese market. 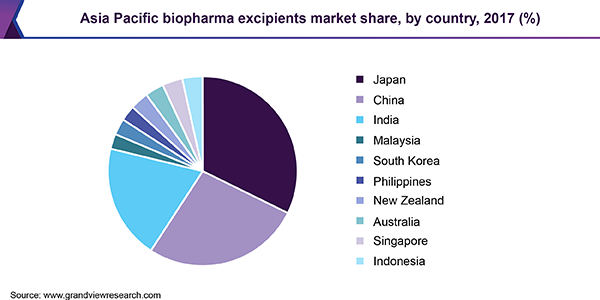 India, on the other hand, is estimated to experience the fastest growth during the forecast period owing to the presence of leading biopharma players, which are involved in increasing their production capacities and expanding their sales internationally. The shifting focus of generic drug manufacturers toward R&D pertaining to biosimilars is projected to supplement the growth of the market.

In recent years, China has rapidly progressed in the field of biologics and biosimilars. According to the ‘Bundling Review’ issued by China FDA in November 2017, all drug formulations in the Chinese market were expected to undergo a review process for continuous commercialization. New regulations include investigations for the safety of excipients used, which were excluded in earlier regulations, thereby creating an urgent need for quality excipients.

The market is fragmented with numerous local private players capturing a substantial revenue share. Established multinational players are involved in the acquisition of local players and forming partnerships with local distributors in order to expand their market presence.

For instance, following the changes in the review system for drug, excipient, and API approval in 2016, international players such as Colorcon, Inc.; Meggle AG; and Roquette have entered the Chinese market. Owing to growth opportunities created due to the call for a reassessment of pharmaceuticals, these players entered the market either through a joint venture or wholly-owned subsidiaries.

This report forecasts revenue growth at global, regional, and country levels and provides an analysis of industry trends in each of the sub-segments from 2014 to 2025. For the purpose of this study, Grand View Research has segmented the Asia Pacific biopharma excipients market report on the basis of product and region:

How big is the asia pacific biopharma excipients market?

What is the asia pacific biopharma excipients market growth?

b. Japan dominated the Asia Pacific biopharma excipients market with a share of 31.2% in 2019. This is attribute to better quality products placed at a higher price along with the increasing number of contract research organization (CROs) in the country.

Who are the key players in asia pacific biopharma excipients market?

What are the factors driving the asia pacific biopharma excipients market?

b. Key factors that are driving the market growth include advancements in drug discovery & development technology, introduction of complex bioactive & large biomolecules, and growing significance of biologics for treatment of life-threatening diseases.