The global Asia Pacific thermoplastic elastomers (TPE) films market size was estimated at USD 5,025.0 billion in 2015. The market is anticipated to witness significant growth over the next seven years owing to increasing automotive production in countries such as China, India, Thailand, and Indonesia. Government policies to investment liberalization coupled with private players focusing on improving technologies are expected to fuel demand.

TPEs are widely used in automotive components due to superior properties such as tactile grip, moisture resistance, and excellent elasticity and flexibility. Strong demand from other end-use industries such as footwear, medical devices, and electronics is expected to remain a key driving factor for growth over the forecast period. 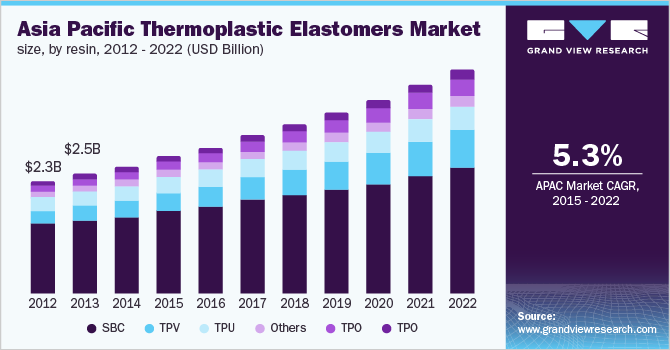 China occupied the highest market share in the year 2015, accounting for 56.1% of the overall TPE market share in terms of revenue. High industrial output in the country has facilitated manufacturing growth that resulted in emergence of large number of domestic manufacturers for automotive components, electrical & electronics, plastics, and other major end-use industries. Increasing production in the aforementioned industries is expected to drive TPE demand in its specific applications. Additionally, growing passenger car and its aftermarket components sales are expected to drive demand for TPV, TPU, and TPO over the forecast period.

Growing demand for advanced thermoplastic composites in automotive, electrical & electronics and industrial applications as a general-purpose substitute is expected to drive its demand. TPV is expected to be the fastest-growing product segment at a CAGR of 11.2% over the forecast period. Its high demand in automotive components and under the hood applications are expected to be a major factor driving the product segment growth.

Additionally, automotive OEMs in the country are actively incorporating thermoplastics as a substitute for metals to provide automobiles with better performance and fuel efficiency while reducing the overall curb weight of the vehicle. These factors are expected to drive demand for TPV, TPU, TPO, and SBC in automotive applications. Increasing construction spending to improve road infrastructure and energy efficiency of buildings is expected to drive TPO and TPU demand for roofing and thermal insulation applications respectively.

Ease of processing and recycling with negligible emissions is expected to lead towards higher demand. They have successfully replaced thermosets in various applications such as electronic components and medical devices. TPE is gaining wide popularity due to a high degree of purity (low level of extractable compounds), recycling ability, and cost-effectiveness. They are being touted as an ideal substitute for PVC and latex owing to the aforementioned factors.

Rapid industrialization, economic progress, and increasing disposable income have fostered the development of automotive, consumer goods, and electronics sectors, leading to higher demand in component manufacturing applications. This factor is expected to fuel market growth specifically in China and India.

Development of enhanced production processes has boosted demand for recyclable and biodegradable TPE generating less scrap material. Exponential growth is expected to be witnessed in the packaging application segment on account of rising demand for transparent product packaging in various markets such as medical, consumer goods, and electronics. Other growing industries are expected to drive thermoplastic elastomers to demand footwear, personal care products, wire and cable, sports and leisure equipment, and clothing applications.

Industry participants will have to overcome significant barriers to replace rubber materials thoroughly. As market penetration is achieved in existing applications, market development is expected to be hampered, and key companies are increasingly undertaking product innovation to permit entry into new markets where rubber still dominates most applications.

SBC was the largest application segment and accounted for over 50% of the total revenue in 2015. Hydrogenated SBC is gaining prominence in adhesives, sealants, coatings, and films applications owing to its superior pressure sensitivity. Increasing demand from major applications such as paving & roofing, footwear, and advanced materials is anticipated to uplift further industry growth over the next seven years.

TPO was the second most consumed product in the overall market. TPO is widely used in automotive applications such as bumpers, fascia systems, and instrument panels. Major automotive OEMs are increasingly incorporating plastics in automotive components as a replacement for metals and alloys aimed at weight reduction, chemical resistance, and structural strength. 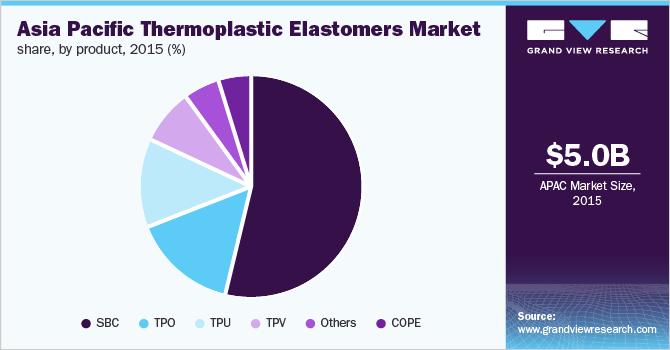 TPV is widely used in automotive, fluid handling, and consumer goods applications. Increasing TPV consumption in automotive applications, such as under the hood components and interiors, owing to its high heat and oil resistance is expected to be a major driving factor for its growth over the forecast period.

TPU is largely used in automotive, hose & tubing, construction, and wire & cables. It's superior acoustic and thermal insulation properties as compared to that of thermoset PU is a major factor contributing to its consumption in the aforementioned applications.

China TPE market dominated the regional demand and is estimated to maintain its dominance over the forecast period. The industry in the region is characterized by high demand for TPV and TPU in medical and automotive applications respectively. Favorable regulations pertaining to thermoplastics consumption in automotive applications as substitutes for metals and alloys along with growing passenger car production is expected to further complement the regional market growth over the forecast period.

Japan accounted for over 20% of the total market share in terms of revenue in 2015. The market in the region is characterized by favorable regulatory policies regarding plastics usage in automotive component applications.

India accounted for over 10% of the total market revenue in 2015. With global automotive OEMs shifting their production bases to India due to favorable manufacturing conditions such as low capital investment, availability of skilled labor and cheap raw material availability, small scale TPE manufacturers benefited in terms of demand & supply.