The global attention deficit hyperactivity disorder market size was valued at USD 16.4 billion in 2018 and is estimated to exhibit a CAGR of 6.4% over the forecast period. Product launches across the globe, approval of new drugs, and increased research and development activities are likely to drive the market.

An increase in awareness about mental health among the general population and governments is expected to propel the ADHD market. The rising number of people suffering from a host of mental health disorders, including attention deficit/hyperactivity disorder, has caught the attention of governments around the world, forcing them to take necessary steps to address this condition. In 2016, the U.S. Department of Health & Human Services awarded up to USD 54 million to the Substance Abuse and Mental Health Services Administration (SAMHSA) for the next four years to address the needs of individuals with serious mental illnesses. 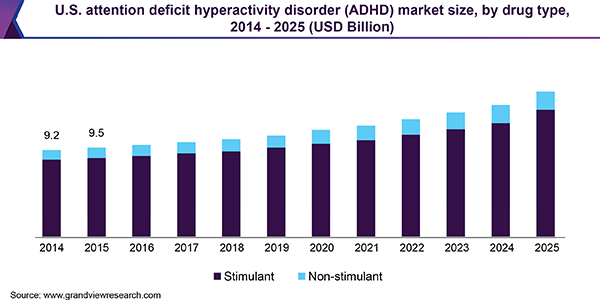 Similarly, NHS England set up a five-year plan for mental health in 2016. The government committed to implementing this plan by 2020–2021, investing USD 1.27 billion into the project. Therefore, government support, along with growing awareness among various parties, is anticipated to boost the market.

Approval and commercialization of new drugs by market players are also expected to play a crucial role in driving market growth over the coming years. For instance, in August 2017, Shire launched FDA-approved MYDAYIS for the treatment of ADHD patients aged 13 and older.

The stimulant segment accounted for the largest share in the ADHD market in 2018 and is expected to maintain its dominance throughout the forecast period. This can be attributed to the high demand for these drugs due to their effectiveness in treating symptoms of attention-deficit/hyperactivity disorder, ongoing clinical trials, and government support for the use of stimulants in the treatment of mental health disorders. In April 2016, Tris Pharma, Inc. announced the launch of its FDA-approved liquid ADHD medication Dyanavel XR (amphetamine), which is used to treat patients over the age of six.

Non-stimulants are expected to exhibit the fastest growth rate during the forecast period due to their long-lasting effect compared to stimulants. The fact that these drugs present no risk of substance abuse is also a key factor in boosting segment growth. Furthermore, an increasing number of market players have been investing in the development of non-stimulant drugs for attention-deficit/hyperactivity disorder, which is driving the segment.

Based on demographics, the attention-deficit/hyperactivity disorder (ADHD) market has been bifurcated into children (2-17 years of age) and adults (aged 18 and above). The adult segment held the largest share in the market in 2018 and this can be attributed to a large patient population. According to ADD Health and Wellness Centers, Inc., attention-deficit/hyperactivity disorder affects more than 4.0% of the adult population in the U.S. According to the U.S. Substance Abuse and Mental Health Services Administration (SAMHSA), in 2015, there were 17.2 million individuals who used stimulants, of which 1.8 million were youth (age 12-17) and 4.9 million were adults (age 18-25).

Based on the distribution channel of ADHD drugs, the market has been segmented into hospital and retail pharmacies. In 2018, retail pharmacies accounted for the maximum market share. An increasing number of prescriptions and a rise in inpatient care initiatives by retail pharmacies have driven the segment. 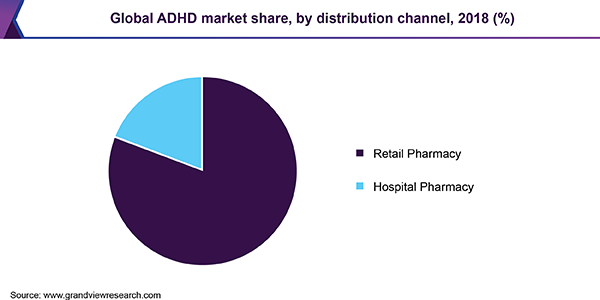 ADHD inpatients are fewer in number compared to patients in-home care settings owing to the lengthy nature of the treatment of the condition. Patients prefer purchasing drugs from retail pharmacies rather than hospitals and therefore, the segment is expected to retain its lead throughout the forecast period. The segment is also anticipated to register the highest CAGR of 6.6% from 2019 to 2025.

North America dominated the global market and accounted for more than 68.0% of the total market in 2018. This can be attributed to the large volume of drug prescriptions every year, increasing product launches, and the rise in collaboration among players to enhance market penetration and product development.

In August 2017, Shire launched a new prescription drug MYDAYIS (the the the latest formulation of Adderall) in the U.S. for ADHD patients over the age of 13. In October 2018, Dr. Reddy’s Laboratories launched the Atomoxetine capsule to treat attention-deficit/hyperactivity disorder in the U.S. Hence, the commercialization of products is expected to boost the North American market.

Europe is expected to grow at the fastest rate during the forecast period due to increasing awareness about mental health, rising prevalence of attention-deficit/hyperactivity disorder, high consumption of additives and preservatives, and improving coverage for treatment of the condition.

For instance, in December 2015, Pfizer received the U.S. FDA approval of Quillichew ER, a chewable tablet for the treatment of ADHD in patients 6 years and above. This is available in 20 mg, 30 mg, and 40 mg formulations. Furthermore, in February 2018 Lupin launched a generic version of Kapvay in the U.S., which expanded its product line for the treatment of attention deficit/hyperactivity disorder.

This report forecasts revenue growth on global, regional, and country levels and provides an analysis of the the latest industry trends in each of the sub-segments from 2014 to 2025. For this study, Grand View Research has segmented the global attention deficit hyperactivity disorder (ADHD) market report based on drug type, demographic, distribution channel, and region: