The Australia skin laser market size was estimated at USD 328.9 million in 2021 and is expected to expand at a CAGR of 6.3% from 2022 to 2030. Growing esthetic consciousness and increasing awareness about physical grooming have led to high demand for skin laser treatments in Australia. In addition, with the introduction of effective and safe laser resurfacing devices, the preference for non-invasive techniques in aesthetics is increasing. Rapid technological advancements have also led to novel product development. The Australia Ablative Skin Laser segment is expected to witness compound annual growth of 6.1% during the forecast period. 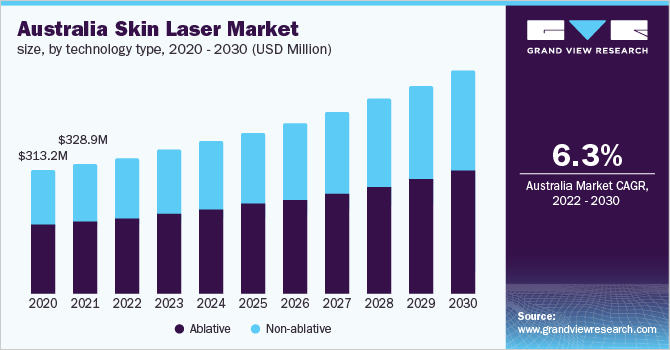 The outbreak of COVID-19 led many aesthetic facilities to completely halt their services and permanently cancel appointments as they were considered non-essential and high contact in nature. Esthetic treatments like laser resurfacing also witnessed a setback and the number of procedures declined due to the pandemic. However, the number of people willing to undergo cosmetic treatments has increased, which might drive the demand for skin laser treatments in the country.

There has been a drastic shift from using conventional products to technologically advanced equipment, which is assisting in better diagnosis, prevention, & treatment of various skin diseases and improving aesthetic appeal. The advent of technologically advanced non-invasive laser therapies has led to high demand for laser skin treatments in the country. According to the Australian Laser Clinic, Alexandrite GentleLase Laser by Candela is the fastest-growing laser system in the country for laser treatment, as it has an in-built cooling device that offers pain-free and effective treatment.

The increasing prevalence of skin conditions is a significant factor leading to an increase in the demand for laser resurfacing devices, thus driving the market growth. Skin conditions most commonly affect immunosuppressed individuals who are easily infected by bacteria, fungi, and other disease-causing organisms. There have been much research data published on the prevalence of skin diseases in Australia.

In general, the conditions seen in dermatology clinics and general practices are similar in scope to other Western countries. However, various studies show that skin cancer and other related conditions are more prevalent in Australia and New Zealand than in the UK, presumably primarily due to the high environmental exposure to ultraviolet radiation.

The rising exposure of social media platforms and increasing awareness of advanced as well as effective laser resurfacing treatments are boosting the growth of the market. According to Yellow Social Media Report 2020, around 15% of Australians were more likely to buy a product or a service from brands that are promoted by celebrities or social influencers, while 63% said that celebrity/social influencer endorsements reduce their purchase likelihood. Moreover, the study revealed that around 23% of Australians use social media to get information regarding a brand, business, or product.

The pandemic affected the global aesthetic industry as governments in many countries mandated temporary shutdowns of aesthetic facilities the same was the case in Australia. Most of the dermatology and aesthetic clinics, including the Australian Laser Clinic, Result  Laser Clinics, and Skin Laser Clinic, were closed in line with the lockdown announced by the government. Beauty and aesthetic clinics were shut in Queensland, New South Wales, Western & Southern Australia, and Victoria until the end of August 2021 due to increasing per day cases.

The ablative skin laser technology segment held the dominant market share of 56.7% in 2021 of the skin laser market in Australia. By technology type, the market is divided into Ablative and Non-ablative. Ablative lasers include carbon dioxide (CO2) or Erbium laser resurfacing treatments. Erbium is used for finer lines and wrinkles, along with other superficial skin concerns.

Both types of ablative lasers remove outside layers of the skin. This treatment is minimally invasive and requires a longer recovery and a higher degree of risk than non-ablative lasers. Treatment by ablative lasers can require 1 to 2 weeks of recovery time and includes risks like redness or swelling, infection, skin color changes, and scarring. These factors might hinder market growth in the coming years.

Non-ablative laser treatment is expected to witness high growth during the forecast period as these procedures are completely non-invasive, have fewer associated risks, and provide effective treatment results. These lasers include pulsed light, pulsed-dye lasers, and fractional lasers that deliver a precise wavelength of light below the skin’s surface to induce a controlled injury without damaging the surface of the skin.

As these lasers can be used on any skin type and on different skin conditions like improving skin texture and tone, fine lines, mild wrinkles, and pigmentation issues with less downtime, the demand for non-ablative laser treatments is expected to increase in the country.

Laser skin resurfacing machines are most commonly used for the treatment of photodamaged skin & acne scars. The high incidence of these skin conditions is anticipated to facilitate segment growth. Furthermore, technological advancements in these devices, especially the introduction of fractionated laser systems, are anticipated to further fuel segment growth. Moreover, the combination of both ablative and non-ablative laser techniques in one system by Alma Lasers is expected to further increase the market growth.

According to the Australian Institute of Health and Welfare, the number of people over 60 years of age continues to grow in the country and is projected to more than double by 2057. As the appearance of wrinkles becomes more prominent with increasing age, many aesthetic clinics in the country have customers falling in the age group between 30 to 60 years with high demand for laser treatments for wrinkle reduction. 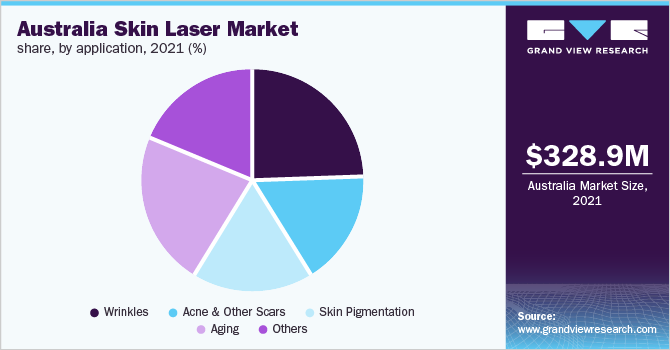 In addition, the use of Radiofrequency (RF) devices for wrinkle reduction is also anticipated to fuel market growth. For instance, according to a study published in the Journal of Research in Medical Sciences, nearly 33.3% of the participants were satisfied with the results following an anti-wrinkle treatment using the Accent RF devices.

The players in the regional skin laser market are focusing on the development of new products and innovations, thus increasing the availability of advanced laser techniques in the market. Laser techniques are constantly undergoing significant improvements, which have made devices more efficient and cost-effective. For instance, with recent advancements, laser technology delivers effective results in a minimum number of sessions, unlike repeated numerous sessions that were required earlier.

Newly designed laser devices work effectively on all skin types. In July 2021, Alma Laser received USFDA 510k approval for its Alma Hybrid, a laser platform that includes an ablative 10,600 nm (CO2) laser and non-ablative 1570 nm laser for skin resurfacing. The introduction of both ablative and non-ablative techniques will provide physicians with a high level of treatment flexibility and allow patient customization based on skin conditions.

Some of the prominent players in the Australia skin laser market include:

This report forecasts revenue growth at the country level and provides an analysis of the latest industry trends in each of the sub-segments from 2018 to 2030. For the purpose of this study, Grand View Research has segmented the Australia skin laser market based on technology type, product, and application:

How big is the Australia skin laser market?

What is the Australia skin laser market growth?

b. The ablative skin laser technology segment held the largest market share of 56.7% in 2021 of the Australia skin laser market owing to the fact that these lasers have proven effective in treating a variety of skin issues such as warts, scars, deep wrinkles, fine lines, sun damage, and others

Who are the key players in the Australia skin laser market?

What are the factors driving the Australia skin laser market?