The global autoimmune disease diagnostics market size was valued at USD 3.3 billion in the year 2015 and is estimated to reach a value of USD 5.0 billion by 2025, growing with CAGR of 4.1%. Increasing prevalence of autoimmune disorders such as type 1 diabetes in newborn babies coupled with demand for rapid diagnostics is the key driver accentuating growth.

Research and diagnostics institutes over the globe are undertaking initiatives in compliance with government organizations owing to the rising prevalence of autoimmune disorders and the consequent rise in healthcare expenditure. According to the data published by the National Institutes of Health (NIH), these disorders have been ranked as one of the top ten disorders leading to increased mortality rates among women.

The introduction of technological advancements and increasing lab automation rates are estimated to fuel market growth. Clinicians are adopting advanced technology in order to conduct multiple tests at the same time with faster and more precise results.

Slow turnaround time associated with the usage of conventional disease diagnostic techniques and the presence of a lesser number of standardized tests for over 80 disease types are some of the shortcomings encouraging laboratories to move toward automation.

Moreover, the presence of favorable government initiatives is anticipated to positively boost market dynamics. Organizations such as the Autoimmunity Centers of Excellence, Cooperative Study Group for Autoimmune Disease Prevention, and North American Rheumatoid Arthritis Consortium are actively involved in educating patients and healthcare professionals regarding proper diagnosis and treatment.

Growing awareness amongst patients concerning these diseases is expected to drive the market growth. Survey results conducted by the American Autoimmune Related Diseases Association, Inc. (AARDA) in 2013 suggest that the ability of an American patient to name an autoimmune disease has increased by 10% (as compared to the last conducted survey).

This increase can be attributed to extensive public awareness campaigns undertaken such as the Autoimmune Awareness Month held in March 2014 and National Awareness Campaign by the AARDA.

On the basis of type, autoimmune diseases are segmented into localized and systemic disorders.

Localized disease diagnostics dominated the overall market in terms of revenue in 2015. The presence of large procedure volumes and relatively higher (in comparison with systemic diseases) patient awareness level are some of the factors accounting for its large share.

On the other hand, systemic disease diagnostics are expected to witness the fastest growth over the forecast period on account of the implementation of favorable government initiatives, especially the AMP RA/SLE program for patients suffering from rheumatoid arthritis and systemic lupus erythematosus.

The program is anticipated to provide a platform for the development of novel therapeutics and the generation of publicly accessible precompetitive and disease-specific databases for further research usage. 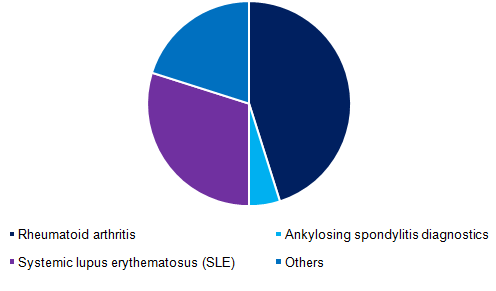 North America held the largest market share of over 40.0% in 2015, majorly due to the introduction of the Affordable Care Act, the presence of favorable regulations & initiatives undertaken by the AARDA, and high disease prevalence in the region.

According to AARDA, nearly 50 million Americans have some form of autoimmune disorder. A high prevalence of these diseases along with healthcare expenditure has triggered the introduction of favorable initiatives by the government and other industry-friendly organizations. These initiatives aim to curb healthcare spending by diagnosing diseases at an early stage and elevating patient awareness levels.

Asia Pacific region is expected to witness lucrative growth due to constantly improving healthcare infrastructure, growing patient awareness levels, and the presence of high unmet patient needs. It is expected to experience an increase in revenue share during the forecast period. Its market share is anticipated to grow from 21.0% in 2015 to over 22.0% in 2025.

The development of novel products for efficient and rapid diagnosis is a key strategy undertaken by the majority of key players. For instance, in 2016, Inova announced the approval of its QUANTA Flash dsDNA, Scl-70 assays, and Jo-1 range of assays for the diagnosis of systemic lupus erythematosus, systemic sclerosis, and polymyositis & dermatomyositis respectively.

This report forecasts revenue growth and provides an analysis of the industry trends in each of the sub-segments from 2014 to 2025. For the purpose of this study, Grand View Research has segmented the autoimmune disease diagnostics market on the basis of type, and region: