The global automatic number plate recognition system market size was estimated at USD 1.9 billion in 2018 and is expected to exhibit a CAGR of 6.8% from 2019 to 2025. Automatic number plate recognition is a technology that is used in mass surveillance to capture the image of vehicles to identify the registration number. The rise in the number of vehicle thefts has led to rising demand for these systems among law enforcement agencies. Moreover, the rising concerns regarding the usage of these vehicles for crimes such as kidnapping and robbery are driving the market.

Automatic number plate recognition (ANPR) offers real-time insights under Object Detection and Recognition (OCR) technology to identify license plates on vehicles. To identify the license plates, various recognition techniques such as closed-circuit television and cameras and character recognition are used. The automatic number plate recognition systems have provided increased efficiency for automated toll tax collection, car theft, traffic control, and border crossings. Besides, there has been a significant rise in the adoption of these systems for perimeter security and access control applications, which is a major driving factor. 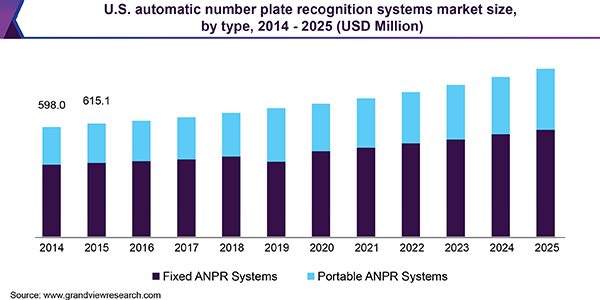 Developments in processing technologies and advances in digital cameras and recognition devices are positively contributing to the market growth. Mainly deployed by law enforcement agencies, automatic number plate recognition systems continue to play a crucial role in vehicle inventory management. Also, massive growth in the automobile sector across the globe is likely to influence the use of automatic number plate recognition devices on a large scale. Furthermore, government agencies are increasingly focusing on developing integrated unmanned aerial vehicles (UAVs) for the development of a city-wide ANPR network that bodes well for market growth.

As ANPR systems are widely used in identifying speeding cars, traffic law enforcement, and automated toll collection centers, there has been a growing awareness about highway speed limits among drivers, which has helped in reducing highway accidents to a certain extent. A major issue that can be related to road safety is the driving of vehicles with unregistered number plates. Such vehicles increase the burden of road safety as it becomes difficult to identify those vehicles. Besides, an increase in the number of initiatives by governments for the development of smart cities, including intelligent transportation systems and traffic management systems bodes well for market growth.

On the contrary, inaccuracy led by automatic number plate recognition systems, resulting in false-positive readings is likely to restrain the market. These systems deal with the problem of number plate cloning. Thieves have used car cloning techniques to evade automatic number plate recognition systems. Car cloning is the practice of using a number plate of a legally registered car to hide the identity of a salvaged or stolen car. Another restraint with the systems is data privacy. There is less assurance on the security of images captured and data stored by these systems.

Based on type, the market has been segmented into fixed and portable automatic number plate recognition systems. Fixed systems maintained a dominant position in 2018 accounting for a higher revenue share. The segment has gained traction in recent years on account of high demand by traffic police/personnel and defense forces. Fixed systems are largely demanded by the security forces since it can be tailor-made for any application and individual equipment that can be configured for multi-lane coverage. Benefits provided by fixed systems such as constant surveillance in high-density traffic areas are driving the growth of the segment. Furthermore, fixed systems enable real-time enforcement for frequent toll violators which is contributing to the market growth.

The portable system segment is expected to gain traction and is projected to exhibit the highest CAGR over the forecast period. These equipment are widely adopted by law enforcement agencies owing to their cost-effectiveness and flexibility of usage. These devices are increasingly being adopted by a large number of public safety agencies for speed enforcement. Various governments across the globe are focusing on providing contracts to ANPR providers such as NDI Recognition Systems, Siemens, and Tattile Srl for the provision of portable automatic number plate recognition systems. For instance, the Government of the U.K. provided a contract to NDI Recognition Systems for purchasing portable automatic number plate recognition devices developed by NDI Recognition Systems - ROAD WARRIOR RADAR.

The hardware segment dominated the ANPR system market in 2018 and is expected to grow significantly over the next six years. The emergence of IoT, which has enabled the rapid integration of hardware among each other and into cloud-based software solutions, is expected to drive the growth of the hardware segment. Increasing demand for ANPR cameras for integrating them with aircraft, patrolling vehicles, and Unmanned Aerial Vehicles (UAVs) is accelerating the growth of the hardware segment. Major improvements in Digital Signal Processors (DSP) and Field Programmable Gate Arrays (FPGAs) have enhanced the performance of automatic number plate recognition hardware. Currently, these devices use a separate camera followed by a stand-alone computer for processing.

Governments in countries such as Peru, Argentina, and Panama are providing contracts to players such as Kapsch Group and NDI Recognition Systems for integrating existing systems with companies’ automatic number plate recognition software. For instance, in September 2017, Kapsch Group was awarded three contracts by the governments of Peru, Argentina, and Panama for the integration of Kapsch Group’s EcoTrafiXTM urban traffic management software with their existing traffic management systems that include more than 150 ANPR cameras.

The traffic management segment dominated the automatic number plate recognition system market in 2018 and is expected to grow significantly over the forecast period. Automatic number plate recognition equipment help improves the flow of traffic through information exchange. Various automotive manufacturers are focusing on the integration of the ANPR network with the communication equipment of vehicles such as Global Positioning Systems (GPS), Global Navigation Satellite Systems, and vehicle-to-vehicle networks. Also, these systems offer data for traffic counts, travel speed, and origin-destination that is driving the growth of the segment. Furthermore, growing demand for these systems for applications such as congestion charging is a major trend contributing to the segment growth. The congestion charge is the charge levied on the driver that drives into heavy traffic areas.

The security and surveillance segment is projected to emerge as the fastest-growing segment over the forecast period. The rising number of terrorist attacks globally has compelled public safety and intelligence agencies such as Transport Research Laboratory (TRL) to look for means to increase their surveillance networks. Also, in recent years, there has been a rise in the adoption of Vehicle-Borne Improvised Explosive Devices (VBIED) from terrorist organizations. For instance, in February 2019, an Indian military convoy was attacked by a VBIED housed in an SUV led to the death of more than 40 soldiers. To avoid such incidents, law enforcement agencies are extensively using ANPR systems to identify suspicious vehicles. 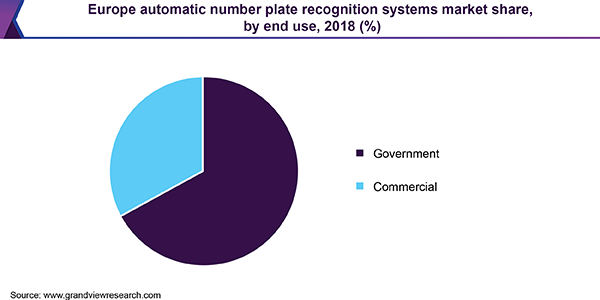 The commercial end-use segment is expected to witness the highest CAGR over the forecast period. In the commercial segment, ANPR systems are widely adopted by Vehicle and Operator Services Agencies (VOSA), driver and vehicle licensing agencies, private parking facilities, toll collection agencies, and premise security agencies. In recent years, there has been a rise in demand for electronic toll collection systems owing to the expansion of road networks. Furthermore, there has been a rise in the number of shopping malls, commercial parking facilities, and the preference of real estate agencies to implement advanced techniques for the management of vehicles in their parking facilities.

North America maintained a dominant position in 2018 accounting for the highest market share owing to the rapid digitalization of traffic monitoring devices on highways, bridges, and tunnels. IoT-enabled approach for configuration of automatic number plate recognition equipment with traffic monitoring device is gaining high traction over the forecast period. Demand for human-free intervention in traffic monitoring devices is likely to influence the regional market growth in the forecast period. Ongoing research and development activities in North America for the development of radar-based automatic number plate recognition systems is expected to drive the demand for fixed systems.

The Asia Pacific is projected to emerge as the fastest-growing regional market over the next six years. ANPR systems are increasingly being deployed for traffic control, enforcement of traffic, and parking regulations in countries such as China, Vietnam, Indonesia, and South Korea. Besides, the rapid development of smart cities is leading to an increased demand for this equipment. The growing emphasis on highway patrolling in these economies is expected to drive the demand for handheld automatic number plate recognition systems.

The key players in the market include Robert Bosch GmbH; Siemens; ARH, Inc.; Axis Communications AB; Kapsch Group; Genetec Inc.; NDI Recognition Systems Ltd.; VAXTOR TECHNOLOGIES; Tattile Srl; and Selex ES Inc. Various companies in the market are emphasizing R&D investments that are helping them develop new products. For instance, in April 2017, Siemens launched a new ANPR camera - Sicore II that can scan up to 2,000 vehicles per hour. Furthermore, various other players are focusing on acquiring long-term contracts from government and law enforcement agencies for delivering this equipment. For instance, in September 2017, Genetec Inc. bagged a contract from the University of British Columbia for the installation of Genetec Inc.’s ANPR systems in its parking facility.

This report forecasts revenue growth at global, regional, and country levels and provides an analysis of the latest industry trends in each of the sub-segments from 2014 to 2025. For this study, Grand View Research has segmented the global automatic number plate recognition system market report based on type, component, application, end-use, and region: