The global automotive airbag and seat belt market size was valued at USD 46.42 billion in 2017 and is anticipated to expand at a CAGR of 5.9% over the forecast period. Continuous efforts taken by prominent companies to introduce innovative airbag and seatbelt technologies have contributed to market growth. Over the past few years, Original Equipment Manufacturers (OEMs) and suppliers have been working toward the development of advanced products.

Some of them have successfully launched their products with slight differentiation from their competitors. For instance, Key Safety Systems (KSS) has been supplying improved rear seat belts, Inflatable Seat Belts, to Ford Motors, which are capable of protecting the shoulder and torso area on inflation. In addition, they are capable of being deployed within as little as 40 milliseconds of a crash. The introduction of stringent regulations by governments across the globe to improve road safety is another driver propelling market growth. 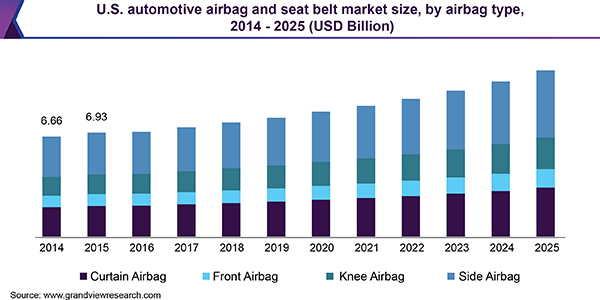 Growing awareness regarding the importance of implementing passive safety systems, such as airbags and seatbelts, among consumers is also likely to augment market expansion. Governments, especially in emerging nations including India, and China, are increasingly making amendments and introducing new regulations to ensure enhanced road safety.

In 2017, the Union Road Transport Ministry of India announced that cars manufactured from 1st July 2019 onwards must install essential safety features to curb the issues pertaining to over speeding and its consequences. These safety features include front airbags, seat belt reminders, and speed alerts, and parking systems.

On the other hand factors such as the production of counterfeit goods may hinder market growth as these pose a great threat to the sales, revenue, and brand image of key companies. According to the U.S. Federal Trade Commission, the global automotive parts industry claims to have lost billions of dollars due to the growing availability of counterfeit products.

The side airbag segment led the market in 2017 and was valued at USD 11.57 billion. This can be attributed to the added safety and security features offered by side airbags as they are designed to offer protection to the three critical areas of an occupant’s body i.e. head, torso, and chest. Moreover, they work along the front airbags to minimize injuries sustained during an accident.

However, the knee airbag segment is anticipated to experience the fastest growth over the forecast period. This is mainly due to the fact that these products actively protect the legs of front passengers and act as a replacement to the bolster seat, usually behind the driver. In addition, they offer protection to the kneecaps, one of the most delicate parts of the body.

The passenger vehicle segment is the largest end-use segment of the automotive airbag and seat belt market. The segment was valued at USD 32.09 billion in 2017 and is anticipated to witness significant growth over the forecast period. The segment usually experiences high demand from passenger vehicles, which include economy cars, compact cars, minivans, SUVs, and premium and luxury cars. Growing spending and awareness regarding the importance of using vehicle safety systems will also boost demand.

The commercial vehicle segment is also expected to witness substantial growth owing to the implementation of stringent regulations by governments across the globe. In addition, the automotive industry has reported a recovery in the production of commercial vehicles in many parts of the world. The increasing number of mandates pertaining to the implementation and usage of seatbelts in both commercials, as well as passengers, vehicles is also responsible for the growth of the end-use segment.

The three-point seat belt segment led the automotive seat belt market and was valued at USD 20.16 billion in 2017. The segment acquired more than 90% of the total market share and is expected to retain its dominance over the forecast period. This can be attributed to the added protection offered by these seatbelts. They help protect the passenger’s upper body and pelvis and minimize injuries. 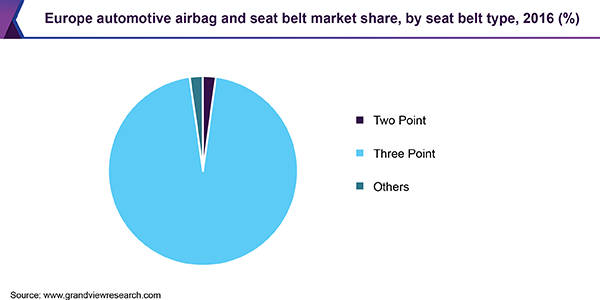 They are installed in the majority of passenger and commercial vehicles. The three-point type offers enhanced safety and better grip than other seatbelts. Due to all these factors they are expected to remain the preferred choice and would witness significant growth over the next few years.

North America was the dominant regional market and valued at USD 13.52 billion in 2017, which can be attributed to the strict regulations regarding road safety in the U.S. and Canada. For instance, under the Intermodal Surface Transportation Efficiency Act of 1991, all the passengers as well as commercial vehicles in the U.S. should have airbags on both sides of front seats, which makes it a must for OEMs to incorporate them in every model variant.

Furthermore, the automobile industry in these countries has recovered from the economic crisis, making them one of the major markets. However, the Asia Pacific is expected to register the highest CAGR during the forecast period. The region comprises emerging nations, such as India, China, and Thailand, which are increasingly implementing road safety regulations to lower the number of fatalities caused due to road accidents.

The market is characterized by the presence of numerous companies, including a few well-established ones with worldwide operations. The prominent companies contribute to more than 50% of the overall market share. Some of these companies are Autoliv, Inc.; Continental AG; Toyoda Gosei Co., Ltd.; Key Safety Systems (KSS); Robert Bosch GMBH; ZF Friedrichshafen AG; and Hyundai Mobis Co., Ltd. Besides major firms, there is a large number of regional companies who have a limited geographic presence and product lines and offer solutions at competitive prices.

Most of the major companies focus on strategies, such as mergers and acquisitions and product development to maintain the industry position. For example, the recent announcement of Takata Corporation filing for bankruptcy in 2016 and its acquisition by Key Safety Systems (KSS). Moreover, in 2015, TRW Automotive Holdings Corp. was acquired by ZF Friedrichshafen AG.

This report forecasts revenue and volume growth at global, regional, and country levels and provides an analysis of the latest industry trends in each of the sub-segments from 2014 to 2025. For the purpose of this study, Grand View Research has segmented the global automotive airbag and seat belt market report on the basis of type, end-use, and region: