The global automotive chromium market size was valued at USD 1.43 billion in 2015 and is projected to grow at a CAGR of 5.93% over the forecast period on account of its increased use in passenger vehicles. This growth can be attributed to its superior corrosion and wear resistance properties. In addition, spurring sales of passenger vehicles will also contribute to the market growth across the globe.

The demand for decorative plating has been increasing in the automotive sector on account of its usage in coating various vehicle parts such as wheel covers, logos & emblems, door handles, interior & exterior trims, mirror housings, and others. The rising popularity of chrome has boosted the need for advanced production facilities and is expected to propel market growth over the next nine years. Growth in the market can also be attributed to the use of functional chromium which is mainly used in piston rods and piston rings. The rising demand for vehicles particularly in North America and Europe is expected to have a positive impact on the market. 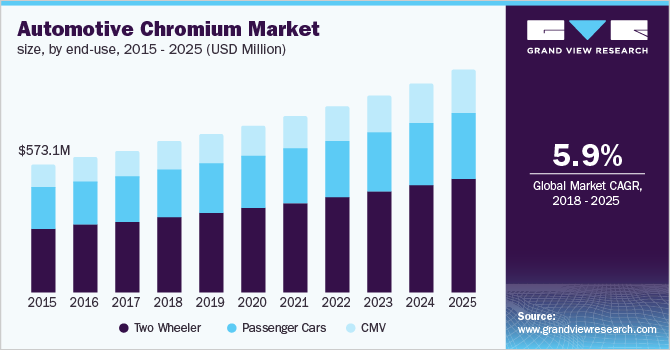 Decorative plating was estimated as the largest application segment and is expected to gain a significant share on account of the growing demand for chroming. Decorative chromium is applied over nickel or copper plating, since it adheres well to both, and the combined effect provides excellent corrosion protection. In addition, an increasing number of vehicles across regions is expected to fuel the market growth over the next nine years.

Increasing demand from the passenger vehicle segment on account of the easy availability of credit facilities is expected to fuel industry growth. This in turn is expected to increase the demand for chroming for various interior and exterior automobile components. Also, the chromium is widely used for various two-wheeler component as it improves the aesthetics and also possess properties such as corrosion resistance, and wear resistance.

The chromium plating process involves different steps which include degreasing, cleaning dirt & impurities, and different types of pretreatment varying according to the substrate material. However, stringent environmental regulations are expected to pose a challenge to the industry growth over the next nine years.

Decorative chrome plating has witnessed a widescale application in the automobile sector. It is extensively used for coating door handles, mirror housing, wheel covers, body trims, and logos. Moreover, chromium also shows a broad application in the two-wheelers segment owing to its ability to enhance the aesthetics of the vehicle, and its excellent weather resistance properties. Global sales in the motorcycle industry reached 58.5 million in 2021, showcasing a recovery of 8.4% from 2020. The increasing demand for personal vehicles is likely to boost the market demand during the forecast period.

Government initiatives to grant consumers ease of access to credit facilities have propelled the demand for automobiles. For instance, in March 2022, according to the Federal Reserve System, consumer credit surged at a rate of 14% annually. The aforementioned factor has fueled the market growth.

Furthermore, functional chromium is widely utilized in the manufacturing of piston rings and rods. According to European Automobile Manufacturers Association, global motor vehicle production accounted for 79.1 million in 2021, with significant growth over the previous year’s production. Increasing automobile demand is anticipated to drive the market during the estimated years.

Chromium pollution is severely impacting natural resources such as soil and water. Besides, excessive exposure to chromium has raised various health concerns. Moreover, strict environmental regulations along with various remediation technologies are anticipated to limit the market growth.

Decorative chromium was the largest application segment accounting for over 69% of the global market in 2015. This type of plating is usually applied in the range of 0.1 - 2.0 μm, and hence is used mostly for plating exterior automotive components. The properties such as abrasion and stain resistance are expected to fuel the demand for this application over the forecast period. 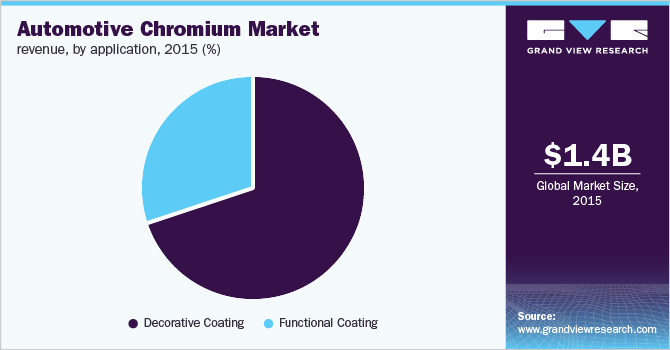 Germany and UK cumulatively accounted for over 35% of the Europe market in 2015 on account of rising automotive vehicle production in this region. These countries are engaged in manufacturing passenger and commercial vehicles on a large scale. The innovative use of chromium to provide quality components as per the industry requirement is expected to have a positive impact on the market over the next nine years. 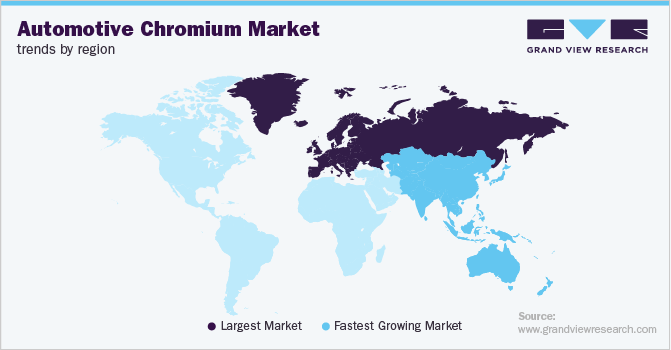 Demand in the Asia Pacific was valued at USD 343.5 million in 2015 and is expected to remain the second-largest market during the period from 2016 to 2025. This growth can be attributed to the shift of production facilities in emerging markets such as China and India owing to the lower operational expenditure as compared to that in developed regions. This in turn would result in substantial demand for chrome plating in the Asia Pacific over the next nine years.

Key players in the industry include Macdermid Enthone Inc., Kakihara Industries Co., Ltd., Sarrel, and MVC Holdings, LLC. Intense competition has made companies focus on the affordable pricing structure and product quality differentiation. Hence, companies have been investing in research and development to maintain market share along with a focus on sustainable growth.

This report forecasts revenue growth at global, regional & country levels and provides an analysis of the latest trends and opportunities in each of the sub-segments from 2014 to 2025. For the purpose of this study, Grand View Research has segmented the automotive chromium market on the basis of application, end-use, and region. 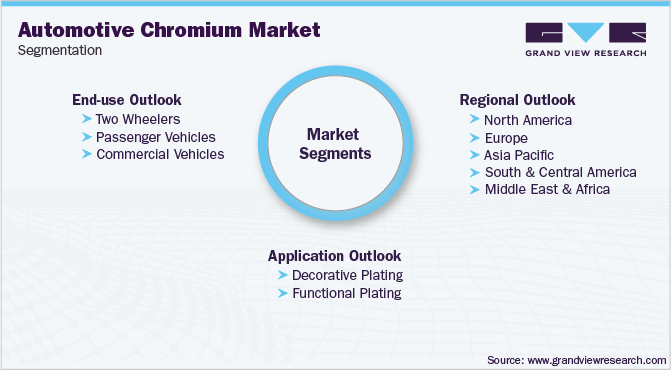