The global automotive tire market size was valued at USD 227.7 billion in 2015. Technological advancements across the industry are expected to spur the demand over the forecast period. Companies in the automotive tire space continuously focus on product differentiation by offering innovative technologies due to the competitive nature of the industry. The technology offers high levels of performance and durability, for example, the tread pattern self-regenerates as it is used, which means it can deliver a high level of grip even when worn. 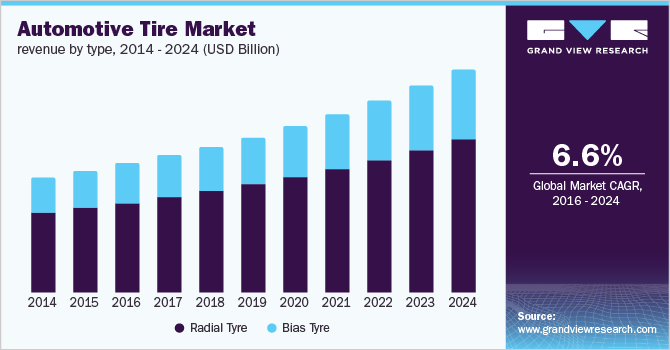 Increasing sales for passenger and commercial vehicles across the globe is anticipated to drive the consumption for tires over the future. According to the OICA, the International Organization of Motor Vehicle Manufacturers, over 90 million new passenger and commercial vehicles were manufactured in the year 2015, registering a cumulative growth of over 1.1% over the previous years’ production. In Europe, over 17 million motor vehicles were manufactured, which was around 19% of the overall global production, which has led to an increase in demand for automotive tires.

Tire manufacturers are increasingly interested in developing sustainable tires that are not only cost effective and meet scrupulous performance standards. For example, Lehigh Technologies offer Micronized Rubber Powder (MRP), which are low-cost, sustainable, customizable and high-performing feedstock for manufacturing that has been used in over 300 million tires.

Increasing adoption of Low Rolling Resistance (LRR) and self-inflating technology by manufacturers owing to the increasing awareness regarding the fuel efficiency is projected to drive the demand. LRR tires reduce wasted energy and decline the required rolling effort. Increasing pressure to improve fuel mileage has forced all of the manufacturers to adopt these tires.

Automotive tire vendors that compete for original equipment fitments are improving Corporate Average Fuel Economy (CAFE) and are trying to achieve the federally mandated target of 54.5 miles per gallon by 2025.

Radial tire emerged as a dominant segment in 2015 and accounted for over 75% of the overall revenue in the same year. The radial tire is expected to dominate the market owing to several benefits such as lower fuel consumption, less ground compaction, and damage, greater productivity, reduction in replacement, and reduced machine maintenance costs.

A major shift to radialisation across the bus and the truck segment with global vendors focusing on capturing significant revenue share in the countries such as India is anticipated to spur the segment growth.

Passenger Cars (PC) segment dominated the industry with over 40% revenue share in 2015. Demand for passenger cars is mainly subjective to economic conditions dictated by fluctuation in exchange rates, GDP growth, inflation levels, and changes in government policies. In addition, volatile fuel prices and the transportation infrastructure also tend to influence demand for passenger cars. Worldwide demand for PC is expected to gain traction over the future, driven by the improving economic outlook in the U.S. and developing markets such as China and India.

The industry witnessed a slowdown in the heavy and medium commercial vehicle sales due to the economic slowdown. However, rural demand for the light commercial vehicle is rising across countries such as India, which is amongst the major automotive market in Asia.

The Asia-Pacific automotive tire industry accounted for over 40% in 2015, growing at a CAGR of over 6% from 2016 to 2024. Emerging economies such as China and India are expected to drive the regional growth over the forecast period. Due to rapidly growing domestic consumption, evolving standards, cheap labor, and a large base of the population, these countries are anticipated to supplement future growth in the world economy. India is the fastest-growing country in the LCV and passenger car segment owing to the rising demand from the rural sector.

Europe is estimated to grow at a CAGR of over 6.5% from 2016 to 2024. Strong demand from the major markets of the European Union is anticipated to drive the new car sales in the region. In 2015, Renault SA, the French car manufacturer is one of the major brands across the sector. Sport-utility vehicles continue to drive sales higher in Europe.