The global biohazard bags market size was valued at USD 304.2 million in 2019 and is expected register a CAGR of 5.7% during the forecast period. The increasing demand for biohazard bags is attributed to the growth of hospital beds in developing countries, increasing patient population, the volume of diagnostic and lab testing samples, and awareness regarding the benefits of hospital waste management in curbing the spread of infection. 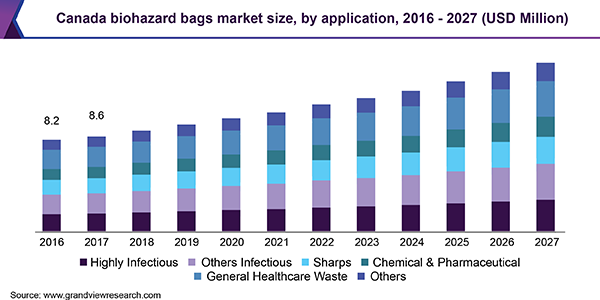 The awareness about the benefits of proper waste management has grown significantly over the past years, especially in hospitals and healthcare industries of developing countries. The primary step in proper disposal of hospital waste is safe, sturdy, and well-labeled collection bags. Biohazard bags are colored and numbered as per the type of hospital waste that they are meant to be used for.

Biohazard bags for collecting infectious waste are marked in either yellow or red (as per the country’s healthcare standards) and are numbered accordingly. Bags for sharps such as needles, surgical tools, and other contaminated metal items, are generally made from HDPE (High-Density Polyethylene) material. Biohazard bags made from HDPE are tough and puncture-proof and are resistant to high pressure-high temperature condition of autoclaves.

Metals and other infected/contaminated hospital wastes are generally subjected to autoclave sterilization prior to disposal. Autoclaves are a cost-effective and efficient method to decontaminate hospital wastes so that they no longer remain hazardous. Nevertheless, many healthcare institutes and hospitals may also consider incineration as a method of effective decontamination/disposal of hospital waste, especially in the case of epidemics such as the COVID-19/Coronavirus epidemic in 2020. Since the biohazard bags are made from plastic or plastic derivative compounds, they can be easily incinerated along with the infectious hospital waste, thus providing an effective solution in cases of such epidemics.

The sharps waste segment is anticipated to witness the fastest growth over the forecast period. It includes metallic and non-metallic surgical/invasive equipment, tools, and accessories that are used during surgeries for routine administration. Some examples of sharps waste are needles, scalpels, used/damaged/contaminated guidewires, stitches, sutures, staples, and broken vials. Sharp waste is expected to increase as the volume of patient drug administration and minimally invasive surgical procedures are expected to increase significantly in the future.

Based on product material, the biohazard bags market is categorized into HDPE, LDPE (Low-Density Polyethylene), cellophane, and polypropylene. The LDPE segment accounted for the largest market share in 2019owing to its widespread use in various waste collection applications and its high price to value ratio, which makes it more cost-efficient than HDPE biohazard bags.

The HDPE segment is expected to grow at the fastest rate owing to the increasing demand for handling sharp waste. Furthermore, it is expected that with lowering manufacturing costs, the cost of HDPE biohazard bags is expected to steadily decrease, competing with LDPE bags in waste management. Additionally, the decreasing cost of HDPE bags will also lead to substitution of LDPE with higher quality HDPE biohazard bags in hospital waste management.

The end-use segment includes hospitals, clinics, diagnostic laboratories, and pharmaceutical/research laboratories. With a market share of almost 39%, the hospitals segment observed the largest consumption of biohazard bags, followed by the pharmaceutical/research laboratories segment. Hospitals all over the world are expected to observe a steady growth inpatient population, with some developing countries such as India, Egypt, and Indonesia expecting a significant rise in number of hospital beds. 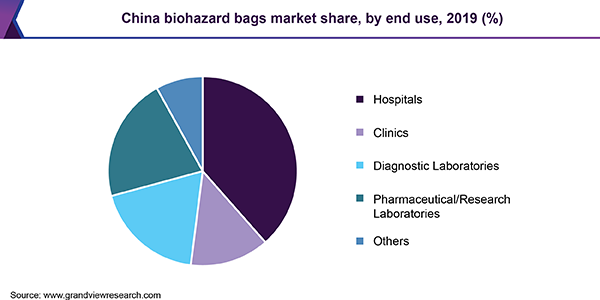 The WHO estimates that each hospital bed in high-income countries generates around 500 grams of hazardous waste per day whereas in low-income countries, it is approximately 200 grams. Hospitals are therefore the largest generators of biohazardous waste and are expected to contribute significantly to the demand for biohazard bags during the forecast period.

Asia Pacific held the largest market share of around 33% in 2019 owing to a large number of hospital beds, increasing patient population, and the presence of numerous manufacturers of biohazard bags in the region. The most populous countries of India and China together have around 8 million hospital beds. Yet the number falls short of the WHO recommended number of hospital beds, which stands at 5 beds per 1000 population.  Increasing investments into the healthcare infrastructure and growing awareness of the benefits of proper waste management is expected to fuel the demand for biohazard bags. Increasing investment and initiatives to reduce the outfall of medical waste has resulted in increased demand for biohazard bags.

Middle East and Africa is expected to exhibit the fastest growth during the forecast period closely followed by Asia Pacific region. The vast population of these continents has great potential in significantly increasing the demand for biohazard bags as the amount of waste generated will increase. The fear of numerous fatal epidemics have alerted the healthcare institutions and ministries, resulting in growing investment in hospital sterility, disinfection, and waste management in the regions.

Some of the major players in the market are Bel-Art SP Scienceware, Dynalon, Heathrow, Thermo Scientific, MiniGrip, TufPak, Cole-Parmer, and Fisher Scientific. These key players are implementing strategies such as mergers with material suppliers, government investments into manufacturing, and agreements with hospitals to provide long term supplies.

This report forecasts revenue growth at global, regional, and country-level and provides an analysis of the latest industry trends and opportunities in each of the sub-segments from 2016 to 2027. For the purpose of this study, Grand View Research has segmented the global biohazard bags market report on the basis of product material, application, end-use, and region:

How big is the biohazard bags market?

What is the biohazard bags market growth?

Which segment accounted for the largest biohazard bags market share?

b. Asia Pacific dominated the Biohazard Bags market with a share of 33.1% in 2019. This is attributable to the large number of hospital beds, large patient population, and presence of numerous manufacturer of Biohazard bags in the region.

Who are the key players in biohazard bags market?

What are the factors driving the biohazard bags market?

b. Key factors that are driving the Biohazard Bags market growth include growth of hospital beds in developing countries, increasing patient population, rising volume of diagnostic and lab testing samples, and growing awareness of the benefits of hospital waste management in curbing the spread of infection.