The global biosensors market size was valued at USD 22.4 billion in 2020 and is expected to expand at a compound annual growth rate (CAGR) of 7.9% from 2021 to 2028. Biosensors, owing to their ability to assess health status, and disease onset and progression, are being used extensively in-home healthcare by patients, and hence, are expected to boost market growth over the forecast period. Furthermore, technological advancements, as well as various non-medical-based applications are expected to enhance the applicability of the market for biosensors, thus promoting its growth. 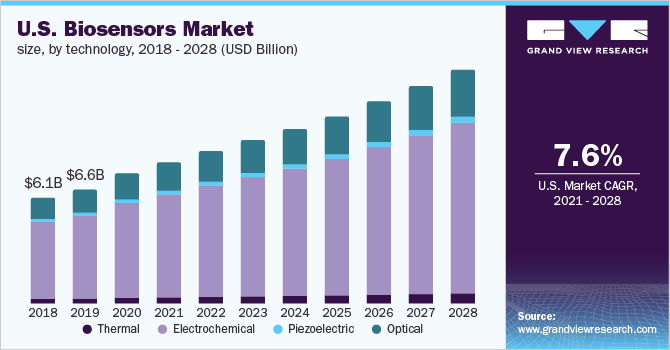 Biosensors are analytical devices that incorporate biological-based sensing instruments, which are associated or integrated with physiochemical transducers. Biosensors aim to produce digital or electronic signals, which are proportional to chemical content and yield specific measurements. Myriad applications in the healthcare sector such as cholesterol testing, blood glucose monitoring, pregnancy testing, and drug discovery are expected to impact the market for biosensors, positively.

The rising prevalence of diabetes as stated by the International Diabetic Federation is about 8.0%, annually estimating over 590 million people to acquire diabetes till 2035, thereby promoting substantial growth of the market over the forecast period. Thus, owing to their ability to assess health status and monitor disease onset and progression they are being used extensively in-home healthcare and hence, are expected to boost market growth over the forecast period.

Furthermore, governmental initiatives aimed at the development of genomics and proteomics are anticipated to fuel the growth of the market for biosensors over the forecast period. For instance, National Information and Communication Technology Australia are expected to advance its research on data mining, networks, and embedded systems to be used in this field. Additionally, the government of China is also financing heavily on its computing networks initiated by the Chinese Academy of Sciences and the China National Grid supported by the Ministry of Science and Technology. In addition, most IT corporations are also heavily investing in the market for biosensors. Investments from major IT players such as Infosys, TCS, IBM, are expected to boost market expansion. Thus, such favorable initiatives are expected to have a positive impact on the market.

Moreover, rapid technological advancements have led to the launch of innovative product launches, which are anticipated to accelerate market growth during the forecast period. For instance, in June 2019, Medtronic announced the launch of two in-home trials of 780G-automated insulin delivery pump system, similar to 670G, and an updated Continuous Glucose Monitor (CGM) sensor for Guardian Connect. The clinical trial is estimated to be completed in early 2020 and the results were to be disclosed in July 2020. Similarly, the use of sensors has increased tremendously in recent years for various purposes in research laboratories, hospitals, and other healthcare settings. The National Institute of Biomedical Imaging and Bioengineering has developed a wireless and compact brain sensor that can record and transmit data about the brain’s activity. This is expected to drive the market for biosensors over the forecast period.

The use of biosensors is increasing in the countries such as the U.S. and Canada owing to the presence of sophisticated healthcare infrastructure and the increasing prevalence of chronic diseases such as diabetes and cardiac disorders as a consequence of unhealthy lifestyles. For instance, according to the National Diabetes Statistics Report 2020, approximately 34.2 million people in the U.S. were detected with diabetes in 2018 and 88 million have prediabetes. Thus, the increasing burden of diabetes demands more frequent blood screening. These devices have specialized sensors that detect blood glucose levels. Additionally, the presence of the Clean Air Act, Clean Water Act, and National Environmental Policy Act in the U.S., which are continuously monitoring environmental pollution is expected to provide the market for biosensors with lucrative growth opportunities over the forecast period.

The electrochemical segment dominated the market for biosensors and accounted for the largest revenue share of 70.9% in 2020 owing to its widespread applications for quantification and analysis in biochemical and biological processes. Electrochemical transduction presents considerable advantages over thermal, piezoelectric, or optical detection, thereby leading to high consumption and greater market penetration. These advantages include robustness, compatibility with new microfabrication technologies, wide linear response range, disposability, low cost, ease of operation, independence from sample turbidity, and minimal power requirements.

The optical segment is expected to witness the highest CAGR of 8.6% from 2021 to 2028. The rising demand for optical biosensors in analysis owing to their versatile analytical coverage is expected to boost the growth of the segment over the forecast period. Optical biosensors are applicable for structural studies, fermentation monitoring, receptor-cell interactions, concentration, kinetic, and equilibrium analysis. Such factors are anticipated to boost the demand for optical biosensors.

The PoC testing segment dominated the market for biosensors and accounted for the largest revenue share of around 49.6% in 2020. Technological advancements of novel product development such as ultrasensitive printable biosensors for point of care applications that help in detecting or monitoring biological fluids such as urine, blood, sweat, and saliva are amongst key rendering drivers attributing to the growth of the segment over the forecast period.

The home healthcare diagnostics segment is expected to witness the highest CAGR of 10.4% from 2021 to 2028. Key factors attributing to its rapid growth include the increasing prevalence of target diseases such as diabetes, cardiovascular diseases, and cancer. Increasing demand for inexpensive and reliable sensors for routine monitoring of patients at home and technological advancements of new product development capable of delivering results with better specificity and sensitivity is expected to boost the usage rate over the forecast period.

In 2020, the medical segment dominated the market for biosensors and accounted for the largest revenue share of 66.6%. The medical segment comprises the use of biosensors in the field of cholesterol testing, blood glucose monitoring, blood gas analyzer, pregnancy testing, drug discovery, and infectious diseases.It is considered an essential tool in the detection and monitoring of a wide range of medical conditions from diabetes to cancer, thereby, contributing to segment growth. 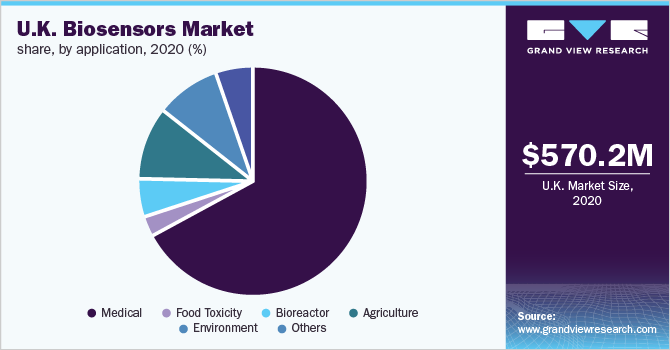 The agriculture segment is expected to witness the highest CAGR of 9.6% from 2021 to 2028. Biosensors provide rapid and specific detection of various funguses as compared to the older techniques that are adopted to reduce the loss of livestock and crops by natural threats and bioterrorism. This device is used to measure the concentrations of pesticides, heavy metals and herbicides, and pesticides in the ground and soil water. These are also used to forecast the possible occurrence of soil disease, which was not feasible the conventional technology. Such factors are contributing to the growth of the market.

North America dominated the biosensors market and accounted for the largest revenue share of 39.9% in 2020 owing to the growing prevalence rate of targeted diseases and the presence of key players in the region. Technological advancements such as the introduction of miniaturized diagnostic equipment rendering rapid and accurate results and rising market penetration of Electronic Medical Records (EMR) are also expected to drive the market over the forecast period. Besides, technological advancements in providing minimally invasive devices, the need for cost-effective medical diagnostics, and the rising demand for home diagnosis are expected to drive market growth in this region.

In Asia Pacific, the market is expected to exhibit the fastest growth during the forecast period. The presence of high unmet medical needs about target diseases, such as cancer, diabetes, and other infectious diseases, growing patient awareness levels, and constantly improving healthcare expenditure in the region, are some of the key factors attributing to the growth of the market in Asia Pacific. Rising demand for point-of-care, home healthcare, and other healthcare establishments catering to the adult population and initiatives undertaken by governments to shorten hospital stays by establishing outpatient care models are also expected to drive the market over the forecast period.

The key players in the market undertake strategy in order to strengthen their product portfolios and offer diverse technologically advanced and innovative products to their customers. This strategy is prominently adopted by companies to attract more customers. For instance, In January 2018, Medtronic and Philips collaborated to develop a Patient Management Platform-LungGPS-that helps in the diagnosis and treatment of patients suffering from lung cancer. This is anticipated to strengthen the product portfolio of the company.

Several market players engage in acquisitions to strengthen their market position. This strategy enables companies to increase their capabilities, expand their product portfolios, and improve their competencies. For instance, in January 2020, Abbott collaborated with Insulet Corporation-a manufacturer of tubeless insulin pumps through the use of its Omnipod product platform to integrate with Abbott's FreeStyle Libre sensor. Through this collaboration, the company would be able to provide personalized automated insulin delivery and care for those with diabetes. Some of the prominent players in the biosensors market include:

This report forecasts revenue growth at global, regional, and country levels and provides an analysis of the latest industry trends in each of the sub-segments from 2016 to 2028. For the purpose of this study, Grand View Research has segmented the global biosensors market report on the basis of technology, application, end-use, and region:

How big is the biosensors market?

What is the biosensors market growth?

b. The electrochemical segment dominated the global biosensors market and accounted for the largest revenue share of 70.9% in 2020.

b. The PoC testing segment dominated the global biosensors market and accounted for the largest revenue share of around 49.6% in 2020.

Which application segment held the largest share in the biosensors market?

b. The medical segment dominated the global biosensors market and accounted for the largest revenue share of 66.6%.

Which segment accounted for the largest biosensors market share?

b. North America dominated the biosensors market with a share of 39.9% in 2020. This is attributable to the growing prevalence rate of targeted diseases, the presence of key players in the region, and technological advancements.

Who are the key players in the biosensors market?

What are the factors driving the biosensors market?

b. Key factors that are driving the biosensors market growth include various applications of biosensors in the medical field, rising diabetic population, high demand for miniature diagnostic devices, and rapid technological advancements.