The global bitumen market size was USD 66.10 billion in 2015 and is expected to witness significant growth over the next eight years owing to increasing use in various applications including roadways, waterproofing, insulation, and adhesives. Rapid urbanization in emerging markets has contributed to rising infrastructure activities. This has resulted in an increasing demand for the product. 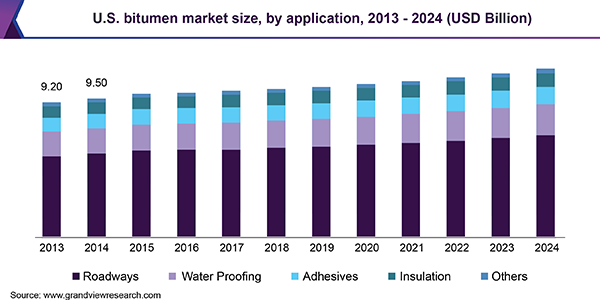 The asphalt (bitumen) binder is an essential element in various roadways applications on account of its higher strength, durability, and resilience. Concrete contains a small percentage of asphalt which is acting as a binder to enhance its resistance characteristics, which is expected to boost demand over the forecast period

Growing demand for infrastructure on account of growing the population, improving the standard of living is projected to bolster bitumen market growth over the forecast period. Increasing awareness about climate changes, along with global warming will drive roofing requirements which in turn is supposed to drive product demand over the next eight years.

Declining oil prices has resulted in tight raw material supply and caused price fluctuation and volatility in the market, which will restrain industry expansion over the forecast period. The long supply chain is a key feature owing to bitumen being a strong product to handle. This feature is being challenged as large contractors have begun directly selling to the refineries.

Roadways were the largest application segment in 2015, estimated at USD 39.29 billion. Road connectivity is the most crucial feature of any developed economy. This factor has resulted in market expansion on account of the growing need for roads in emerging economies. The efficient transportation system in various countries including India, China, and the U.S. will stimulate product demand in the near future.

Rising demand for paving applications across different regions of the world especially in the Asia Pacific and the Middle East will promote product growth over the next eight years. Growing modern construction systems having waterproofed flat roofs will stimulate the product demand over the forecast period.

The bituminous adhesive is used in cold-applied bonding, surfacing, interplay, and sealing. Cold-applied bonding is used to stick roofing felts on asbestos and tiles including railway carriages and roofs on trains. This is likely to propel the demand for adhesives, which in turn is expected to boost the market growth.

The insulation segment is projected to grow at a CAGR of 1.7% from 2016 to 2024 due to the growing demand for bitumen in sealants and electric cable protection. The steady growth in the segment is directly related to the bitumen market growth over the coming years.

Asia Pacific was the dominant market in 2015 and accounted for over 33.0% of the global volume and will show growth on account of rising construction industry growth in India, China, Thailand, and Vietnam.

Moreover, the presence of the major market players in the region including ExxonMobil, Shell Bitumen, and British Petroleum will augment bitumen industry expansion over the next eight years. Also, Asia Pacific will increase its bitumen consumption owing to the extensive road network in the region. 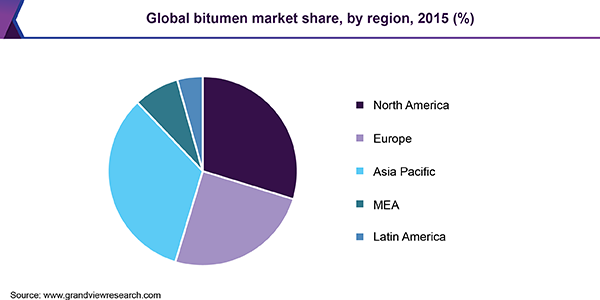 North America market was valued over USD 19.00 billion in 2015 and is expected to witness significant expansion on account of the growing need for rebuilding existing assets such as bridges, highways, and buildings.

MEA is expected to show significant volume gains with CAGR of 2.0% from 2016 to 2024 as a result of the growing construction sector primarily in UAE and Qatar coupled with rising infrastructure activities in the region. Also, increasing government spending on construction will further propel bitumen industry growth in the near future.

Companies including Imperial Oil Limited, Valero Energy Corporation, Petróleos Mexicanos (PEMEX), and Shell are integrated across three stages of the value chain. Kraton Performance Polymers has developed a Highly Modified Asphalt Technology (HiMA) to cater to the ever-increasing demand from the paving and roofing sectors. This technology offers a broad range of modification options including styrene-isoprene-styrene, styrene-butadiene-styrene for high performance, and superior quality.

Kraton Performance Polymer and British Petroleum are engaged in various grades of cost-effective waterproofing applications that provide high water resistance and ability to withstand extreme temperatures. Cenovus Energy Inc. and Suncor Energy Inc. are some of the companies which have cut down their capital expenditures owing to the declining oil prices. The Canadian bitumen has a huge demand in the U.S. due to the presence of a vast number of processing units and refineries.

How big is the bitumen market?

What is the bitumen market growth?

Which segment accounted for the largest bitumen market share?

b. Asia Pacific dominated the bitumen market with a share of 34.0% in 2019. This is attributable to rising construction industry growth in India, China, Thailand, and Vietnam.

Who are the key players in bitumen market?

What are the factors driving the bitumen market?

b. Key factors that are driving the market growth include increasing use in various applications including roadways, waterproofing, insulation, and adhesives and rising in infrastructure activities.