Companies in the market, such as Nestlé Waters, have been focusing on developing lightweight bottles. Nestlé has been investing in R&D that centers to develop new generation bottles. Advancements in technology and practices have reduced production time, which is also contributing to the growth of the market. Asia Pacific was the largest bottled water market in 2016 on account of early acceptance of the product.

Expansion of the Chinese economy contributed to an increase in disposable income, which became a key driver for the market. Growing number of convenience stores in China provided companies in the market with a key distribution channels to penetrate rural and urban regions of the country. The convenience store volume reached nearly 41,000 in 2016.

Most of the major manufacturers such as Nestlé S.A.; PepsiCo Inc.; Bisleri International Pvt. Ltd.; and Danone Waters of America, Inc. have their own sources such as springs and lakes. For instance, Nongfu Spring owns eight springs in China. The company has two spring sources, two lake sources, and four mountain sources.

In terms of revenue, the spring water segment is expected to register the highest CAGR of 7.7% over the forecast period. Rising concerns regarding sugar and artificial sweeteners in carbonate drinks is playing a primary role in driving product demand. The mineral water segment accounted for a market share of approximately 38.0% in 2016 and is likely to expand at a healthy CAGR in the next few years. Demand for mineral water is largely catered by developing countries such as India, Malaysia, and Indonesia. 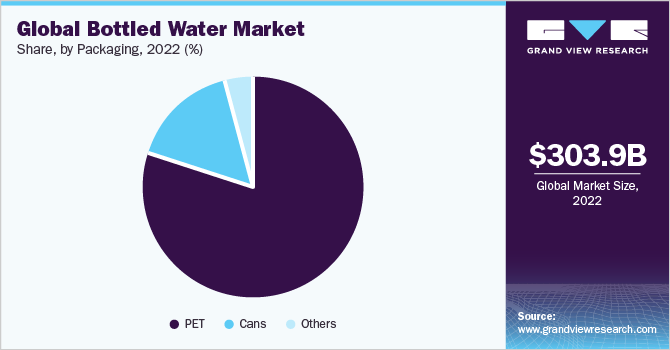 Purified water accounted for a share of 33.0% of the overall market value in 2016. The segment is expected to register a healthy CAGR during the forecast period. Demand for potable water is increasing across the world, especially in developing economies. Countries in Africa and Asia Pacific are expected to be key regions driving the demand for the product over the forecast period.

The sparkling water segment is estimated to be driven by demand from developed markets of the U.S., Germany, and the U.K. Beverage Digest of the U.S. states that sparkling water has become an everyday drink for the American citizens. Thus, a rapid shift towards healthy drinks is likely to be the key growth stimulant for the segment.

The Asia Pacific market is anticipated to witness a CAGR of 8.4% over the forecast years due to rising consumer preference for healthier drinks rather than sugary drinks. Moreover, an increase in per capita income in the region is also expected to have a positive impact on market growth.

The North America market witnessed a share of nearly 22.8% in 2016 and is estimated to witness significant growth in the coming years. Increasing demand for clean water coupled with rising consciousness about a healthier lifestyle is expected to fuel the demand for the product over the predicted timeline.

Europe is the third largest market, which accounted for a share of over 15.0% in 2016. Rising preference for healthier alternative of bottled water to sugar-based beverages has increased the product consumption by nearly 186.8 million of gallons in Germany. The MEA region is driven by growing tourism industry.

Most of these companies are involved in R&D to introduce improved and better-quality packaging for water. Major companies are promoting PET recycling initiative wherein companies are funding new collection containers. They are influencing public authorities through professional associations and PET bottle collection bins are being placed in public spaces.

This report forecasts revenue growth at the global, regional, and country levels, and provides an analysis of the latest industry trends in each of the sub segments from 2014 to 2025. For the purpose of this study, Grand View Research has segmented the global bottled water market report on the basis of product and region: