The global brachytherapy market size was valued at USD 788.5 million in 2020 and is expected to expand at a compound annual growth rate (CAGR) of 7.1% from 2021 to 2028. The increasing prevalence of cancer, technological advancements, and a significant rise in the adoption of brachytherapy are expected to drive the growth of the market during the forecast period. Brachytherapy is a type of radiation therapy used for the treatment of cancer. The radioactive materials are placed inside the body with the help of catheters. 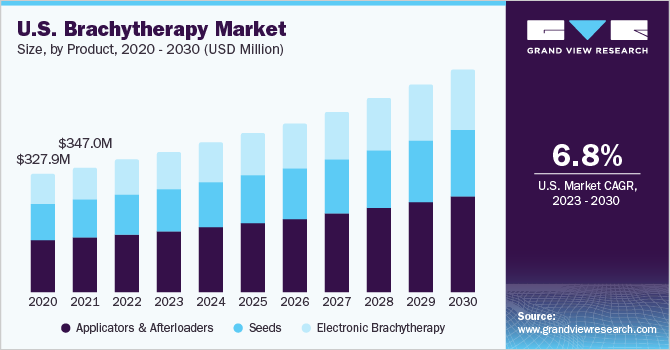 It is an excellent treatment for localized tumors. Currently, artificially produced radionuclides such as Caesium-137, Iridium-192, Gold-198, Iodine-125, and Palladium-103 are routinely used. According to the International Agency for Research on Cancer (IARC), the global incidence of cancer in 2020 is estimated to be around 19.3 million. This is expected to increase to 24.6 million by the year 2030. The increasing cancer burden is one of the major factors driving the market.

Radiation therapy can be used for prophylactic, palliative, or curative treatment. It can also be used as monotherapy or as an adjuvant with surgery, immunotherapy, and chemotherapy. The wide range of applications of radiotherapy has increased its adoption by physicians. The latest advancements in radiation therapy allow the delivery of a high amount of dose to the target area with minimum damage to nearby healthy tissues. This has increased the chances of localized tumor control and has improved cure rates, leading to an increase in demand for radiation therapy.

However, the lack of skilled radiotherapy professionals and access to technologically advanced products, particularly in developing countries is expected to be a major restraining factor for this market. According to the IAEA’s Directory of Radiotherapy Centres (DIRAC), as of 2020, there are around 3300 brachytherapy systems installed across radiation therapy centers worldwide. Around 60% of the cancer cases occur in LMICs. 80% of patients in these countries lack access to treatment as they have limited access to technologically advanced products. In LMICs, only 3-4% of the radiotherapy needs are met as opposed to 60-80% in the European countries.

The seeds segment dominated the market and accounted for the largest revenue share of 30.5% in 2020. Seeds are small radioactive materials that are placed inside the body. These seeds can be placed in the body permanently or temporarily depending on the type of cancer.

The electronic brachytherapy segment is expected to grow at the fastest rate during the forecast period. This technique involves the usage of miniaturized x-ray sources as opposed to radionuclides. The various advantages of electronic brachytherapy such as low dose radiation to the organ at risk, minimal exposure of treating staff to radiation, and no radioactive waste are some of the major factors driving the adoption of this technique.

The breast cancer brachytherapy application segment is expected to witness a CAGR of 7.6% during the forecast period. The increasing usage of brachytherapy in Accelerated Partial Breast Irradiation (APBI) is one of the major factors driving the growth of this segment. Additionally, the rising incidence of breast cancer is also expected to drive the growth of this segment.

The HDR brachytherapy segment dominated the market and accounted for the largest revenue share of 71.2% in 2020. The therapy is generally done as an outpatient procedure for the treatment of various types of cancers such as skin, cervical, prostate, head and neck, and breast cancer. Short procedure time, higher efficacy, and protection from radiation exposure are some of the factors contributing to the dominance of this segment. HDR afterloaders are gradually replacing LDR afterloaders worldwide, as most manufacturers no longer guarantee the maintenance of LDR systems. 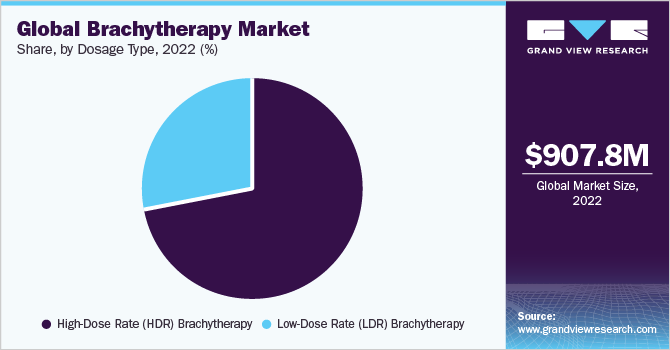 LDR brachytherapy is primarily used for the treatment of prostate cancer. The introduction of new products such as GammaTile for the treatment of brain cancer is expected to drive the growth of this segment. In July 2018, IsoRay received FDA 510K clearance for this product, which uses Cesium-131 seeds which have a better adverse effect profile than other commonly used LDR isotopes.

North America dominated the brachytherapy market and held the largest revenue share of 45.7% in 2020. Brachytherapy is widely used in North America due to the advantages it offers over traditional methods as it is a comparatively safer and efficient cancer treatment. Europe accounted for a share of more than 25.0% in 2020. The usage of brachytherapy in the European region has been increasing over the last 5 years.

In Asia Pacific, the market is poised to witness the highest CAGR during the forecast. The region accounts for over 60% of the world population and half the global burden of cancer. The prevalence of cancer is rising pertaining to an unhealthy lifestyle. In addition, limited access to technologically advanced cancer treatments offers various opportunities for the market players.

Some of the key players have been present in the market for more than 35 years. They already have a well-established network of suppliers and customers, which helps in strengthening their market position. Additionally, some of the major companies also operate in other business domains. Hence, most often they are able to invest huge amounts for R&D activities.

New product launches and mergers and acquisitions are some of the major strategies adopted by the players in order to gain market share. For instance, in 2017, Eckert and Ziegler BEBIG GmbH acquired WOLF-Medizintechnik GmbH, which manufactures X-ray devices for skin tumor treatment. With rapid digitization in the field of medicine, more companies are focusing on integrated applications of hardware and software to develop next-generation oncology treatment solutions. Some of the prominent players in the brachytherapy market include:

This report forecasts revenue growth at global, regional, and country levels and provides an analysis of the latest industry trends in each of the sub-segments from 2017 to 2028. For the purpose of this study, Grand View Research has segmented the global brachytherapy market report on the basis of product, dosage type, application, and region:

How big is the brachytherapy market?

What is the brachytherapy market growth?

Which segment accounted for the largest brachytherapy market share?

b. Based on dosage type, High-Dose Rate (HDR) brachytherapy segment held the largest share of 71.21% in 2020, due to advantages such as short procedure time, higher efficacy, and protection from exposure to radiation.

Who are the key players in the brachytherapy market?

b. Some key players operating in the brachytherapy market include Varian Medical Systems; Elekta AB; Becton, Dickinson and Company; IsoRay, Inc.; Eckert & Ziegler BEBIG; and iCAD amongst others.

What are the factors driving the brachytherapy market?

b. The increasing prevalence of cancer, technological advancements, and a rise in the adoption of brachytherapy is expected to drive the growth of the market during the forecast period.