The global brain computer interface market size was valued at USD 1.52 billion in 2021 and is anticipated to grow at a compound annual growth rate (CAGR) of 17.16% during the forecast period. Key drivers of the brain computer interface (BIC) market include the increasing prevalence of neuroprosthetic conditions, rising global geriatric population base, and rapid technological developments facilitating communication and movement in paralytic patients. Furthermore, the use of this technology in virtual gaming, home control systems, and military communication enhance the applicability of the market, fueling its growth. The COVID-19 pandemic severely affected the market. Market players, such as Natus, reported an impact on their supply chain during the pandemic. This is because most of their materials are single source and need lengthy qualification periods. 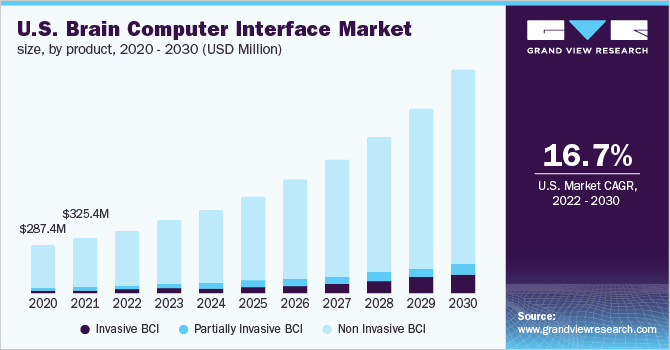 Disruptions in the supply chain negatively impacted their ability to produce and supply finished products. The increasing prevalence of neurodegenerative disorders, Alzheimer’s, Parkinson’s, and epilepsy are expected to create the demand for BCI over the forecast period. According to the WHO report, around 82 million people will be affected by dementia by 2030 and this number will reach 152 million by 2050. This shows the potential demand for BCI in the coming years. The BCI technology is increasingly being used in mobile & virtual gaming industries by integrating within Virtual Reality (VR) headsets & gaming content. According to the data published by MyGaming in 2018, there were about 1.8 billion gamers worldwide and over 171 million VR gamers.

Virtual gaming has unfolded new opportunities for mind-controlled headsets and gadgets, which is further fueling the adoption. The manufacturers are focusing on the development of BCI-enabled video games. For instance, in March 2019, Valve planned to launch video games using the BCI technology. Such innovations are anticipated to propel market growth over the forecast period. Brain computer interface systems are optimally suited for the control of smart home applications with high accuracy and reliability. Home control systems include an application of P300-based technology—an event-related potential component, which helps in decision-making; to carry out various activities.

Some of these activities include opening & closing doors & windows, switching on & off lights, controlling the TV set & music systems, and operating a video camera at the entrance. The aforementioned factors are expected to increase the market penetration in the coming years. The increasing global geriatric population is another growth propeller for the market. Presently, there are more than 52 million people of age 65 years and above in the U.S. alone, and the number is anticipated to double by 2060. The rising geriatric population is expected to heighten the susceptibility towards chronic conditions, such as diabetes, cardiovascular disorder, and sleep disorder, thereby creating the need for BCI technology for a better living style.

On basis of product, the market can be segmented into invasive, partially invasive, and non-invasive BCI. Non-invasive BCI held the largest revenue share of over 86.00% in 2021 owing to the high applicability of this technology to products, such as headsets, amplifiers, and gaming sticks, contributing to the massive revenue generation. This system is considered to be the safest as the approach is less intrusive, which is further fueling the segment growth. In addition, numerous research projects are going on in this field. For instance, in June 2019 Carnegie Mellon University in collaboration with the University of Minnesota developed the first-ever mind-controlled robotic arm using BCI technology, which can track and follow a computer cursor.

A product like this is anticipated to boost market growth in the foreseeable future. The invasive segment is expected to witness the fastest CAGR over the forecast period owing to the ability of this technology to provide the functionality to paralyzed people through brain-controlled robotic legs & arms and restore vision by connecting the brain to an external camera. The invasive device is positioned in the grey matter and is prone to building up scar tissue. Partially invasive BCI is also expected to show significant growth over the forecast period owing to its easy adaptability and various technological advancements. For instance, in September 2019, Synchron Inc. launched Stentrode, a partially invasive neural interface technology to record brain activities wirelessly.

On basis of application, the market has been segmented into healthcare, smart home control, communication & control, and entertainment & gaming. The healthcare segment captured the largest revenue share of more than 62.00% in 2021 owing to the high applicability of this technology in the treatment of sleep disorders, neurological diseases, paralytic patients, and in studying neuroscience. Moreover, technological advancement & increasing number of initiatives by the key industry players are further fueling the segment growth. For instance, in June 2018, Medtronic launched a new clinician programmer for deep brain stimulation therapy along with Activa (TM) Programming Application.

In October 2018, Advanced Brain Monitoring Inc. received a grant from the National Institute on Aging to develop robot-assistive interventions in aging & dementia. The initiatives like these are contributing to the dominant share of the healthcare segment. The smart home control segment is projected to witness a lucrative CAGR due to increased demand for a better lifestyle. With smart home controls, people are experiencing better convenience and comfort right from security monitoring, operating entertainment systems & appliances to maintaining connectivity. The aforementioned factors are expected to propel the segment growth over the forecast period.

On basis of end uses, the global market has been further segmented into medical, military, and others. The medical end-use segment dominated the market in 2021 and accounted for the maximum share of more than 45.5% of the global revenue owing to its application in assisting disabled patients. The BCI technology assists in the movement of patients suffering from diseases, such as Parkinsonism, epilepsy, paralysis, and Alzheimer’s, to carry out activities independently, such as an operating wheelchair, prosthetics, and various other instruments. 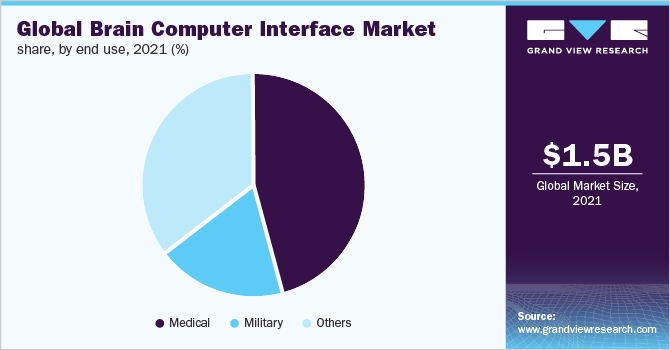 The military end-use segment is expected to register the fastest growth rate over the forecast period on account of to increased usage of BCI during war activities. The development of mobile robots that can function as weapon-equipped drones in war zones and advanced communication systems, such as Defense Advanced Research Projects Agency’s (DARPA) “Silent Talk”, which would enable soldiers and military personnel to give commands via telepathic communication, is anticipated to contribute to the growth of this segment.

North America accounted for the largest revenue share of more than 40.00% in 2021, primarily due to the high R&D investments and a large number of clinical trials being conducted on brain devices in this region. In addition, the rising incidence of neurodegenerative conditions, such as Parkinson’s, Alzheimer’s, and Huntington’s disease in this region are expected to propel market growth. In addition, the rising demand for immersive gaming is expected to lead to the development of technologies, such as augmented brain-computer interfaces that further boost the adoption of BCI technology in this region.

The market in the Asia Pacific region is expected to exhibit the fastest CAGR over the forecast period. Significant untapped opportunities; increasing healthcare expenditure, and growing awareness amongst patients are expected to drive the demand for BCIs in this region. Low-cost manufacturing sites and favorable taxation policies in these countries have attracted foreign players to invest in this lucrative market. Intensive R&D had led to the launch of many innovative products. For instance, in May 2018, Compumedics collaborated with China-based Health 100 to improve its product portfolio in sleep technology. In March 2019, Integra received approval for DuraGen Dural Regeneration Matrix in Japan, which helped in the company’s regional expansion.

There are various small- and large-scale manufacturers offering products, resulting in intense competition among the manufacturers. The industry players are increasing their focus on strategic partnerships, such as mergers and acquisitions, new product launches & partnerships & collaborations to get maximum revenue share in this sector. In June 2020, Ripple Neuro partnered with Brain Electrophysiology Laboratory Company, LLC. The partnership was anticipated to offer seamless integration of Ripple Neuromed’s Quest & Nomad neurophysiology research platform with BEL’s Geodesic Head Web HD-EEG sensor technology. In May 2020, the company partnered up with CGX, to provide CGX Quick System that is a dry electrode, high-grade, and wearable headset. Thus, enhancing the product portfolio. Some of the prominent players in the global brain computer interface market include:

This report forecasts revenue growth at global, regional, and country levels and provides an analysis of the latest industry trends in each of the sub-segments from 2017 to 2030. For the purpose of this study, Grand View Research has segmented the global brain computer interface market report on the basis of product, application, end use, and region:

How big is the brain computer interface market?

What is the brain computer interface market growth?

b. North America dominated the brain computer interface market with a share of 39% in 2021. This is attributable to high R&D investments and a large number of clinical trials being conducted on brain devices in the region coupled with rising incidences of neurodegenerative conditions such as Parkinson's, Alzheimer's, and Huntington's disease.

Who are the key players in brain computer interface market?

What are the factors driving the brain computer interface market?

b. Key factors that are driving the brain computer interface market growth include the increasing prevalence of neuroprosthetic conditions, the growing geriatric population, and rising technological developments facilitating communication and movement in paralytic patients.