The Brazil veterinary vaccines market size was valued at USD 435.3 million in 2019 and is expected to register a compound annual growth rate (CAGR) of 6.4% from 2020 to 2027. Rising mandates for vaccination to curb livestock disease outbreaks and increasing demand for livestock-related food products are primary factors expected to drive market growth. 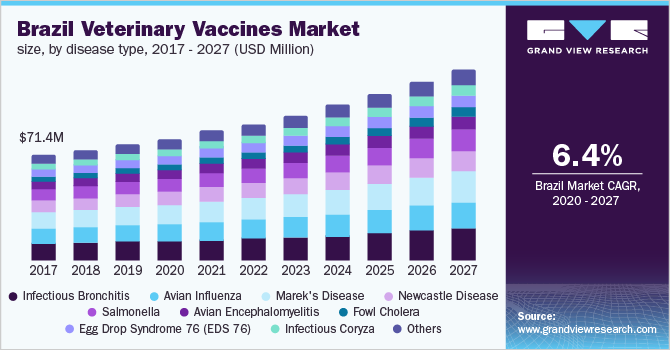 Favorable government initiatives are likely to boost revenue growth. For instance, in May 2018, the World Organization for Animal Health declared Brazil, free of foot and mouth disease (FMD) with vaccination. The National Program for the Eradication and Prevention of FMD reduced the disease vaccine dose from 5 mL to 2 mL and aims to totally withdraw the vaccine by 2021.

Live vaccines segment dominated the market in 2019 with a share of over 40% owing to increased usage in mass vaccination. Attenuated live vaccines have been used for decades and are the oldest immunization method against transmissible gastroenteritis coronavirus and porcine epidemic diarrhea virus. In 2017, Ceva launched CEVAC IBras-the first live attenuated vaccine-for addressing the Brazilian variant of avian infectious bronchitis virus. Recombinant vaccines are expected to witness the fastest CAGR over the forecast period.

This can be attributed to advantages of this vaccine, including lesser risk of pathogenicity and targeted action. Recombinant vaccines have shown efficacy against the Histophilus of some strain. The pathogen largely affects the cattle industry and is responsible for respiratory diseases, septicemia, reproductive tract disorders, infectious thrombotic meningoencephalitis, and pleuritic. Moreover, the vaccines are also effective in the treatment of Rhipicephalus microplus in Brazil, Argentina, Peru, Uruguay, Venezuela, and a few other Latin American countries.

Ruminant segment led the market in 2019 accounting for a share of over 57%. Increasing cattle production and growing initiatives by the government to control sudden outbreak of diseases are the factors expected to propel the segment growth further. Brazil was the world’s second-largest cattle-producing country in 2019.

The major driver for cattle production is improved pastures condition and crossbreeding. The country became the top beef exporter in 2019, outpacing India. Moreover, the outbreak of African swine fever in Asia in 2017 also augmented the livestock production in the country. The lower cost of imported inputs, such as vaccines, due to favorable exchange rates is further fueling the growth of Brazil veterinary vaccines market. 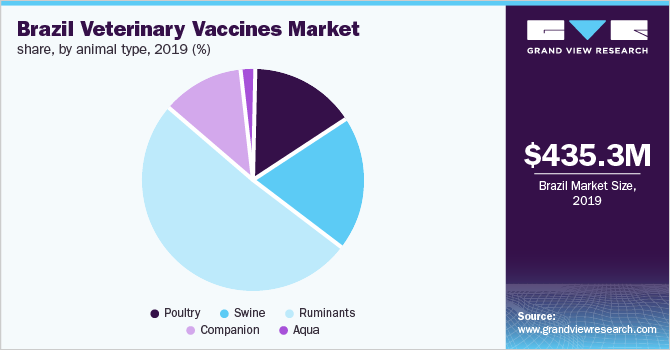 There are several foreign and domestic companies in the market. The country provides numerous growth opportunities to the market participants as it has the world’s largest cattle production. The companies have undertaken several strategic initiatives, such as merger & acquisitions, product launch, the establishment of new manufacturing facilities, and so on.

For example, in October 2018, Sumitomo Corp. entered into a strategic partnership with Ourofino Saúde Animal to expand its veterinary medicine business. In 2017, Ceva entered into the FMD vaccine market in Brazil by acquiring Hertape Saude Animale Ltda. and Inova Biotecnologia Saúde Animale Ltda. Boehringer Ingelheim acquired Merial in 2017, to increase its market penetration. Some of the prominent players in the Brazil veterinary vaccines market are:

This report forecasts revenue growth at the country level and provides an analysis of the latest industry trends in each of the sub-segments from 2016 to 2027. For the purpose of this study, Grand View Research has segmented the Brazil veterinary vaccines market report on the basis of product and animal type: