The global brewery equipment market size was valued at USD 15.97 billion in 2019 and is expected to grow at a compound annual growth rate (CAGR) of 5.6% from 2020 to 2027. Rising preference for craft brewery on account of its unique taste and increasing popularity among beer consumers across the globe are expected to augment the demand for brewery equipment over the forecast period. Increasing demand for brewery equipment is attributed to the rising demand for beers on account of benefits, such as low-calorie content and a high number of antioxidants. Furthermore, beer is a type of liquor made from natural ingredients, including yeast, hops, malted cereals, and water. It thereby contains fibers, vitamins, minerals, and polyphenols that positively contribute to the consumer's diet. 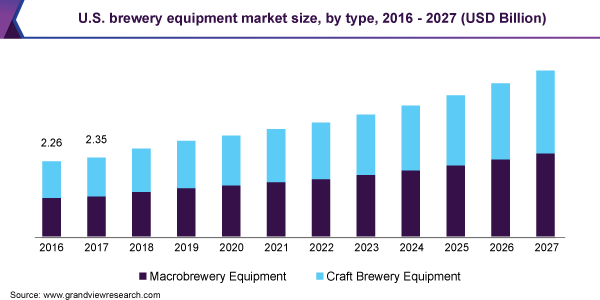 Brewery equipment includes a set of monitoring systems and tools that are used for beer processing in various small, medium, and large-scale applications. The market is largely driven by developments focused on automating the beer-making process. Increasing focus on mechanization and digitization by the beer manufacturers to ensure the progressive enhancement of cost benefits is anticipated to bolster the market growth.

The growing popularity of the beer culture is attracting investments in the industry by key beer manufacturers across the globe. Furthermore, market players are engaged in various activities, such as brewery expansion, enhanced yeast management, increased focus on cellar equipment, energy recovery methods, and outdoor expansion, to strengthen their market presence.

An upsurge in the restructuring of beer laws in various North American and European economies, such as the U.S., Germany, and the U.K., is anticipated to bolster the market growth. However, factors such as high cost associated with the maintenance and capacity capital and the cost of energy and power consumption are anticipated to hamper the growth of the market.

Demand for beer is witnessing a severe decline across different end-use markets due to the COVID-19 pandemic, which in turn, is likely to significantly impact the market growth over the forecast period. Restriction of movement is anticipated to be an immediate and direct factor negatively affecting the demand for beer. However, demand is likely to increase as the compulsory social distancing norms terminates.

Based on type, the market is majorly categorized as macrobrewery and craft brewery. Macrobrewery equipment led the market with a 53.4% share of the global revenue in 2019 and is anticipated to continue its lead over the forecast period on account of expansive and steady growth in the demand for a standard type of beer.

Automatic brewery equipment led the market and accounted for 52.4% share of the global revenue in 2019 owing to the rising demand for process automation in the beer manufacturing process owing to the involvement of complicated procedures. The brewery equipment is available in three primary modes of operation, namely automatic, semi-automatic, and manual.

Automation is considered to be one of the vital infrastructural components by large brewers to ensure the strengthening of their core business that involves beer production. These key breweries thereby focus on significant investment in equipment for incremental brewing, fermentation, and packaging capacity. The aforementioned phenomenon is, in turn, likely to fuel the growth of the market.

Increased consumer inclination towards handcraft and artisanal beer as compared to the conventionally brewed beer or other distilled liquors is projected over the forecast period. This is further anticipated to bolster the demand for different types of automated as well as semi-automated brewery equipment across various regions.

Outcome alterations in the distillery equipment business have initiated the requirement for sustainable and modern distillery facilities by various brewers. However, parameters such as high initial investments, maintenance costs, and electrical expenses are anticipated to emerge as major limitations for emerging market players over the forecast period.

Based on end-use, the market is categorized into a craft brewery and macro brewery. The macro brewery end-use segment led the market and accounted for 53.4% share of the global revenue in 2019. The production consistency offered in the macro-brewery equipment is anticipated to boost the segment growth.

The craft brewery segment includes end-use applications, such as microbrewery and brewpubs. The introduction of brewing equipment for commercial as well as non-commercial applications on account of high costs of commercially available beer is likely to bolster the segment growth over the forecast period. 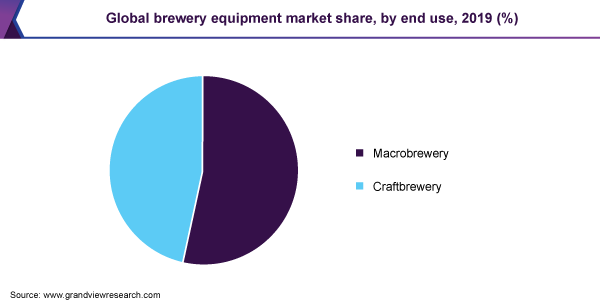 Various alcohol manufacturers and large macro breweries are likely to be engaged in capturing the craft beer market through business strategies, such as acquisitions and mergers. For instance, Anheuser-Busch InBev and Molson Coors Brewing Company acquired various craft breweries to expand their market share, thereby maintaining a strong foothold in the global market.

Increased preference of consumers towards domestic brewing kits owing to factors, such as the provision of making a wide range of craft beer and low cost of production, is observed. Furthermore, growth in the launch of craft beer in various economies, including Germany, the U.K., and the U.S., is likely to augment the segment growth.

Europe dominated the market with a 48.2% share of the global revenue in 2019 and is projected to witness significant growth over the forecast period. Rising acquisition activities between leading multinational breweries and craft breweries in the region are anticipated to a key factor boosting the market growth.

China dominated the Asia Pacific market and is anticipated to witness the highest growth in the region over the forecast period. Growing inclination towards different types of beer due to its health benefits is anticipated to drive the demand for various macro as well as craft brewery equipment in the economy.

North America accounted for a significant revenue share in 2019 and is estimated to expand at a significant CAGR over the forecast period. The growing focus of several manufacturers in economies, including the U.S. and Canada, towards catering to premium taste drinks and unique flavors is likely to bolster the demand for different brewery equipment in the region.

Asia Pacific accounted for the third-largest revenue share in 2019 and is anticipated to expand at a moderate CAGR of 5.8% from 2020 to 2027. Relaxation in the norms regarding setting up breweries by the government of various economies, such as China and India, is projected to increase the demand for brewery equipment in the region over the forecast period.

The global market is fragmented owing to the presence of a wide array of manufacturers operating in the international and domestic markets. The market is characterized by the presence of a significant consumer base across the globe with the companies operating their businesses through dedicated distribution networks. Rigid competition from the regional market players as well as the leading players that cater to cost-effective equipment is anticipated to be a primary challenge for the companies operating in the international market. Furthermore, surging R&D initiatives by market leaders to develop and offer superior equipment are projected to be a limitation for the new entrants. Some of the prominent players in the brewery equipment market include:

This report forecasts revenue growth at the global, regional, and country levels and provides an analysis of the latest industry trends and opportunities in each of the sub-segments from 2016 to 2027. For the purpose of this study, Grand View Research has segmented the global brewery equipment market report on the basis of type, mode of operation, end-use, and region:

How big is the brewery equipment market?

What is the brewery equipment market growth?

Which segment accounted for the largest brewery equipment market share?

Who are the key players in the brewery equipment market?

What are the factors driving the brewery equipment market?

b. The key factors that are driving the brewery equipment market include rising preference towards craft brewery, increasing demand for beer as well as the growing popularity of the beer culture, and a surge in beer processing.