The global camera module market size was estimated at USD 17.84 billion in 2014. Technological advancements in such modules components and architecture and exponential growth in smartphones and tablet PC market are expected to drive industry growth. In addition, increasing applications in the automotive sector and medical sciences are anticipated to fuel demand for such electronic devices.

Manufacturers offer image sensors based on two different sensing technologies. CMOS image sensors are primarily being used for the manufacturing of such devices at present and are expected to replace the majority of the CCD modules in the near future. 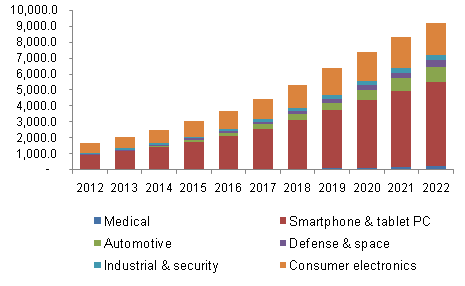 Increasing demand for smartphones and tablet PCs, combined with the growing preference for high-resolution smartphones is expected to play a significant role in propelling camera module industry growth. Consumers have readily accepted mobile imaging through smartphones, which is evident from the increasing demand for devices by Apple and Samsung that offer high definition picture quality as compared to other devices. Additionally, increasing use of smartphone applications for photo sharing and social networking has positively impacted camera module market growth.

The advent of new technologies for distant communication (such as online video calling) in smartphones has increased. Online video chatting, video calling, video conferencing, and online learning through video lectures have gained popularity in recent years.

A camera module is a combination of control electronics, image sensor and interfaces such as Ethernet or Camera Serial Interface (CSI). Its various applications include digital signal processing, home security, and traffic monitoring. Camera modules convert the picture into digital signals, and help in video recording and detecting real-time movements. The camera module market players are projected to witness high growth owing to the increased demand for high-resolution cameras in smartphones.

Camera modules are incorporated in several electronic devices such as digital cameras, smartphones, surveillance systems tablet PCs, and webcams, out of which smartphone and tablet PCs have emerged as prominent devices responsible for surging sales of camera modules. Leading smartphone and tablet vendors use high-resolution cameras to differentiate their products from their competitors. A good camera has emerged as the key buying criteria for customers during the purchase of a smartphone or tablet.

Rising popularity of 4G LTE have had a direct bearing on increased data consumption. The global social media users are growing significantly due to the rising use of smartphones. The social media users use social networking platforms such as Facebook, Instagram, Twitter, and WhatsApp to share photographs with their peers. These platforms have grown immensely in popularity thereby resulting in image sharing being a new trend in the society. Users prefer mobiles having the capacity to capture high-resolution images wherein they can apply various popular image-enhancing filters before uploading them on social media platforms.

Improvement in camera pixel or resolution is a key factor contributing to market growth. In the early years of inception of cameras, CCD replaced vacuum tube imagers, as it eliminated the disadvantages of vacuum tubes such as electromagnetic radiation, sensitivity to shock, lag, and burn-in. In the contemporary world of cameras, CMOS is replacing CCD on account of low production cost and high pixel performance. Additional features such as night vision, image stabilization, and thermographic imaging have also been developed to serve specific areas of application.

The automotive sector is one of the rapidly growing markets for these devices. Various initiatives are being taken by governments and car manufacturers in many regions to ensure driver safety and reduce the number of on-road accidents.

For instance, Audi’s range of car models such as A6 and A8 come equipped with rearview and forward-collision warning systems for better vision and safety, thus increasing the scope for such image sensors in automotive applications.

CMOS and CCD are two types of image sensors used in the packaging of these devices, where CMOS is majorly used at present as compared to CCD. CMOS sensors are produced in bulk for many low-end applications, and their price depends on its application.

CCD image sensors require a specialized manufacturing process and are used in professional, high-end consumer electronic products and high-end scientific applications. However, the cost-effectiveness of CMOS image sensors as compared to CCD sensors has reduced the price of the overall device.

Asia Pacific accounted for close to 60% of the global demand in 2014 by revenue owing to the presence of major electronic components and smartphone manufacturers in the region. Europe and North America are expected to be fast-growing regions, which can be attributed to the presence of tech-savvy consumers with high disposable incomes.

Growing legislation related to the use of automotive cameras in Europe and North America is expected to support the industry. In addition, improved health infrastructure in developed economies coupled with increasing adoption in emerging economies has contributed to the product demand.

The automobile industry has witnessed a surge in demand for video camera equipment, specifically in the premium cars segment. It finds application in various safety system modules such as rearview cameras and forward collision warning cameras for better vision and safety. Regulations related to the use of automotive cameras in Europe and North America are expected to impact the camera module industry positively. Additionally, improved health infrastructure in developed economies and the growing use of the products in emerging economies have contributed to the demand for the product.

The industry is highly fragmented with no dominant player. LG-Innotek led the industry and occupied a major share of the global market in 2014. Major players in the industry are focusing on product differentiation through technological advancements and the addition of innovative products.

Industry leaders in the mobile phone market such as Samsung have started producing such modules for themselves providing them an advantage over the other vendors. Key industry participants include Foxconn Technology Ltd., LG Innotek Company Ltd., Samsung Electro-Mechanics Ltd, Sharp Corp., STMicroelectronics N.V., and Toshiba Corp.