The global canned tuna market size to be valued at USD 11.89 billion by 2027 and is expected to grow at a compound annual growth rate (CAGR) of 4.7% during the forecast period. Shifting consumer preferences for seafood in various cuisines on account of being a rich source of essential proteins, vitamins, and minerals are expected to be a key factor driving the industry. Moreover, the taste of tuna is very delicious and distinct from any other seafood, which is why the product is witnessing high demand across the globe. Over the past few years, the consumption of seafood has been increasing significantly across the globe owing to its rich taste, nutritional properties, and fewer carbon footprints as compared to other meat and beef products. However, tuna is one of the top five most consumed seafood items across the globe. In recent years, the tuna industry is witnessing a paradigm shift owing to increasing production and price competition, changing technology, and shifting consumer demand. 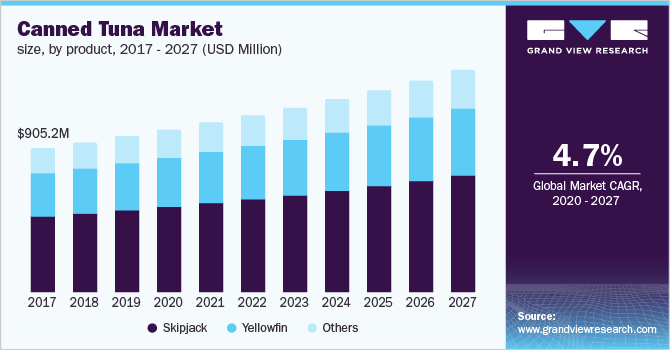 According to the statistics provided by the ‘GLOBEFISH’, a product, trading, and marketing branch of FAO Fisheries and Aquaculture Department, Thailand, Ecuador, China, Indonesia, and the Philippines were the largest exporters of canned and processed tuna. However, the U.S., Japan, Australia, Egypt, Saudi Arabia, and European countries were the largest importers of canned and processed tuna.

During the coronavirus (COVID-19) pandemic, the demand for canned food, especially tuna, has increased significantly across the U.S. Consumers are increasingly buying this product as it is the cheapest protein available in the market, coupled with higher shelf life. These consumer trends are anticipated to boost demand over the forecast period.

High product demand, increasing output, and extensive use in the food industry are the elements driving the market expansion and influencing consumer behavior, thereby resulting in the canned tuna sales in the global marketplace. Canned tuna is a widely consumed meal since it is an inexpensive source of protein and it is also in nearly 70 nations across the world. The health benefits of consuming tuna are it offers a high dose of vitamin B12 which is required for the production of DNA.

Tuna fish's high altitude of omega-3 fatty acidsassists to lower the altitude of Low-Density Lipoprotein (LDL) cholesterol and omega-6 fatty acids that accumulate inside the heart's arteries. Omega-3 consumption is connected to a lower risk of heart attacks, and cardiovascular illness. Tuna is also a great source of other vitamins and minerals such as vitamin B6, selenium, iron, iodine, and potassium.

The demand for canned tuna in most traditional western markets remains relatively consistent, consumption patterns in Asia, notably in southeast Asia, demonstrate that fresh/frozen seafood is still preferred over canned tuna when available. This preference pattern of south Asian consumers limits the growth of the market, especially in South Asia which has a huge consumer base and demand for an inexpensive source of protein and seafood.

Consumers in western markets are now adopting plant-based and organic products in their staple diets this could negatively affect the growth of the market. As the trend of vegan culture and awareness about animal welfare is gaining global traction all around the world this eventually limits the market growth for seafoods.

Skipjack canned tuna held the largest volume share of more than 55.0% in 2019. This species is easily available in the market with rich and nutritious seafood experience. According to the data provided by Fish20.org, Skipjack comprises around 58.0% of the total tuna catch and most of them go for canning. According to the statistics provided by the Centre for the Promotion of Imports, 75.0% of the canned tuna imported into Europe consists of skipjack species.

Yellowfin is anticipated to register the fastest CAGR of 5.0% from 2020 to 2027 in terms of revenue. This species of tuna is gaining more popularity among consumers owing to its rich taste and excellent texture. The growing demand for this canned tuna variant is expected to boost the segment growth over the forecast period.

Hypermarket and supermarket was the largest distribution channel segment with a volume share of more than 60.0% in 2019 and is anticipated to maintain the lead over the forecast period. Major manufacturers are promoting their products through offline retail stores, such as hypermarkets and supermarkets. Moreover, several companies are opening new brick and mortar stores across the globe to expand their customer base. For instance, as per a press release by Target Brands, Inc., the company has planned to open over 25 new stores across the U.S. by the end of 2020 and add seven more stores by the end of 2021. An increasing number of offline stores expand the scope of this distribution channel in the foreseeable future. 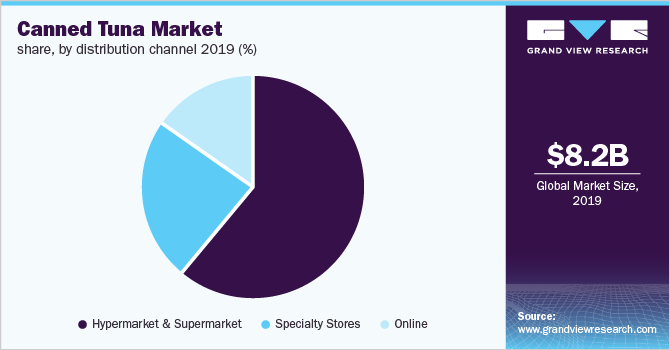 The online segment is anticipated to be the fastest-growing distribution channel with a volume-based CAGR of 4.5% from 2020 to 2027. With rapid digitalization, rising penetration of smartphones, and growing internet access, businesses are gradually shifting from brick and mortar stores to e-commerce. Moreover, manufacturers are increasingly showcasing their products across online platforms, including company-owned portals and e-retailers, to increase their product visibility, especially in the emerging markets. In addition, online giants such as Tesco.com, Walmart, Amazon Prime Pantry, Alibaba, Godrej Nature's Basket, Honestbee, and Yihaodian are expanding rapidly owing to shifting consumer preferences.

Europe was the largest regional market for canned tuna with a revenue share of more than 40.0% in 2019 owing to the increasing adoption of simple, ready-to-eat, and convenient seafood choices among consumers. According to a study conducted by the European Market Observatory for Fisheries and Aquaculture Products (EUMOFA), in 2018, tuna is the most consumed marine species in Europe. Italy, Spain, and the U.K. are some of the largest canned tuna consuming countries in the region. These trends are anticipated to fuel the growth of the regional market over the forecast period. 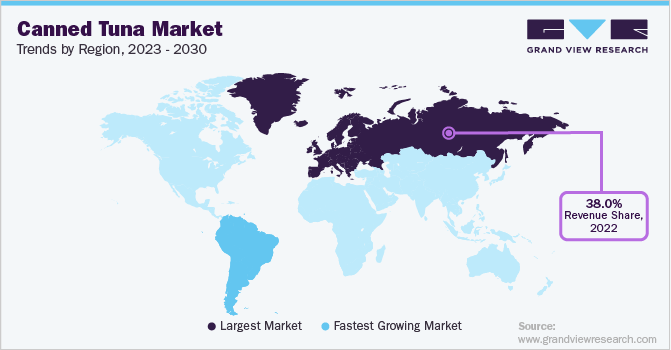 The Middle East and Africa is anticipated to register the fastest CAGR of 5.6% from 2020 to 2027 in terms of revenue. New untapped markets in Middle Eastern and African countries, including Saudi Arabia and Egypt, are emerging as major marketplaces with immense growth opportunities. According to the statistics provided by the ‘GLOBEFISH’, Saudi Arabia has witnessed a surge of 23.3% and Egypt witnessed a surge of 15.0% in 2019 for the canned and processed tuna import as compared to the previous year.

The market for canned tuna is slightly fragmented due to the presence of some stringent regulations by the European and North American countries. A large number of players are present in the global market, but the major consumer demand is catered by some of the key players. These major players hold a substantial market share in Europe, North America, and the Asia Pacific.

Some of the prominent players in the canned tuna market include:

This report forecasts volume and revenue growth at the global, regional, and country levels and provides an analysis of the latest industry trends and opportunities in each of the sub-segments from 2016 to 2027. For the purpose of this study, Grand View Research has segmented the global canned tuna market report on the basis of product, distribution channel, and region. 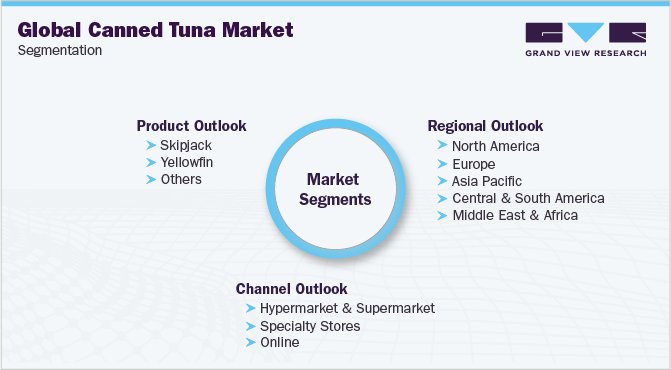 How big is the canned tuna market?

What is the canned tuna market growth?

Which segment accounted for the largest canned tuna market share?

b. Europe dominated the canned tuna market with a share of 40.0% in 2019. This is attributable to the consumerâ€™s increased adoption of simple, ready-to-eat, and convenient seafood choices in key European countries.

Who are the key players in canned tuna market?

What are the factors driving the canned tuna market?

b. Key factors that are driving the market growth include shifting consumer preferences for seafood in various cuisines as itâ€™s a rich source of essential proteins, vitamins, and minerals and more preference for tuna owing to its delicious and distinct taste than any other seafood.