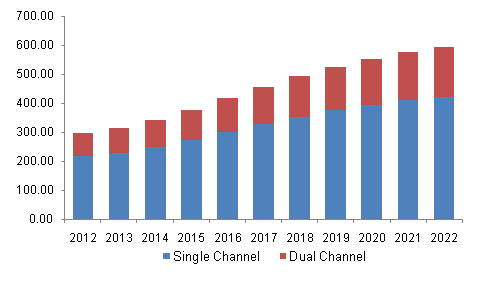 Funding initiatives such as the In-Car Camera Incentive Program and awareness campaigns such as the Teen Safe Driver Program offered by the American Family Insurance in the U.S. have further fueled the demand for such advanced DVR solutions. Declining camera prices and innovations in wireless technology are expected to drive the global car DVR market.

The industry is mainly driven by the use of DVR systems in law enforcement and police patrol vehicles. The video footage is used to track down license plates of law offenders and is used for training new officers to reinforce appropriate behavior. Such vehicles are expected to witness steady demand for new as well as replacement cameras, fueling market growth over the forecast period.

Dash cams are gaining popularity in many parts of Asia, Europe, Australia, and the U.S. for their use in commercial as well as in passenger vehicles. These cameras provide video evidence of any unexpected occurrence such as accidents and insurance frauds. Moreover, technologies such as GPS, G-sensors, and Wi-Fi connectivity integrated into the DVR systems add value to the product.

Premium automobile DVRs are equipped with Advanced Driver Assistance Systems (ADAS), offering functionalities such as lane departure warning to caution drivers when the vehicle starts to drift out of its lane.

However, the use of dash cams is still considered a violation of privacy, and thus, is forbidden by law in certain European countries and carries heavy fines for the violators.

Vendors offer dash cams in two variants, namely, single-channel and dual-channel systems. Single-channel DVR is expected to remain the leading in-vehicle camera system over the next seven years, which accounted for over 70% of the overall market in 2014.

Single-channel DVRs record only the view through the windshield, whereas dual-channel DVRs serve as a medium for collecting all-round evidence in case of accidents since they are capable of recording incidents that occur in the vehicle’s passenger room, as well as through the rear window. The market for dual-channel DVRs is expected to witness high growth over the forecast period.

Advanced features such audible notifications, in-built GPS, extendable storage, extensive battery life and low power drains, high resolution LCD/LED screens, infrared-powered night vision, and smartphone connectivity have added to the user-friendliness and the convenience for the use of such cameras and its applications.

North America is expected to dominate the global car DVR market and accounted for over 35% of the total revenue share in 2014. Increased instances of fatal accidents in the U.S. have led to a rise in the number of DVRs installed in cars, in order to serve as a medium for collecting evidence. Insurance companies are offering incentives for auto insurance for vehicles with installed DVRs to avoid high insurance claims citing lack of proof. Moreover, law enforcement officials in the U.S. are among the key users of DVRs, driving the demand in the region.

Asia Pacific is anticipated to surface as a profitable region for the dash cam industry. The presence of major vendors in countries such as China, Korea, and Taiwan has led to increased adoption of such in-vehicle camera systems in the region. Additionally, favorable government mandates encouraging the use of such camera systems in countries such as India and Korea are expected to push the demand for dash cams.

Manufacturers have also stepped up their marketing activities and have adopted modern channels of distribution such as authorized online vendors and other e-commerce retailers such as Amazon, eBay, and AliExpress apart from authorized brick & mortar stores, automotive spare parts stores, and physical retail stores.