The industry is driven by growing polymer production on account of increasing application scope of the construction and automotive industries in emerging economies including China, India, Brazil, and Middle East. In addition, a favorable regulatory framework placed by various governments for promoting nanotechnology at the domestic level is expected to aid the industry growth. 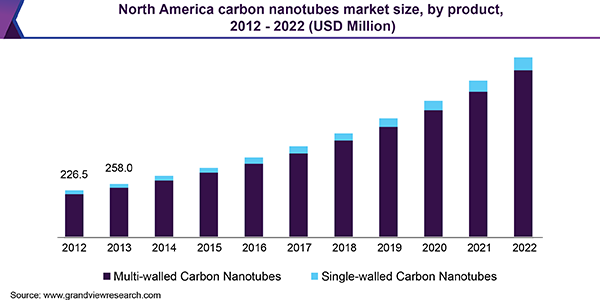 North America is expected to witness significant growth over the forecast period, owing to the high demand for polymer manufacturing to improve the thermal, electrical, and mechanical properties of bulk products. In addition, regulations imposed by the government to promote green energy are expected to aid the industry growth over the forecast period.

High manufacturing cost, coupled with an effective R&D base, is anticipated to pose a major barrier for the new entrants. Product innovation and strategic partnerships with buyers are anticipated to open new avenues for the players. However, the dominance of established players controlling the major carbon nanotubes market share is further expected to discourage new entrants.

The development of bio-based chemicals including bio-ethanol is expected to increase raw material availability. In addition, abundant availability of raw materials such as ethanol in China, Brazil, and India is projected to boost the raw material supply, thereby resulting in a rise in the production of carbon nanotubes.

Single-walled carbon nanotubes (SWCNT) is estimated to reach USD 62.0 million by 2022. The application of the product is expected to increase on account of its low cost as compared to multi-walled carbon nanotubes (MWCNT). The property of high elongation of breakage in SWCNT is anticipated to be a limiting factor for the segment growth over the forecast period.

MWCNT was the largest consumed product in 2014. The high molecular complexity of graphene in MWCNT increases tensile strength, which paves its way for use in polymers, electronics, and energy applications. MWCNT is increasingly fortified in engineered polymers on account of dissipating static electricity and increasing repellency towards airborne contamination.

Polymers was the largest application segment in 2014, accounting for over 60% share in the market. Increasing application of engineered polymers in the construction and automotive industries is expected to fuel demand for CNT. The growing popularity of composites on account of their lightweight property is expected to augment the product demand in polymers. 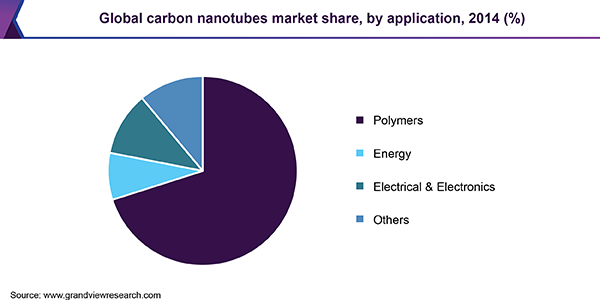 Increasing application of lithium ion battery in the grid and renewable energy storage, coupled with rising product penetration in the application industry, is likely to fuel product demand over the forecast period. Furthermore, favorable government regulations to reduce greenhouse emissions and promote renewable energy are projected to drive the industry.

Asia Pacific emerged as one of the largest regional markets in 2014 on account of the growing polymer industry in China and India. Increasing electronics manufacturing in China, Singapore, Japan, and South Korea is expected to have a positive impact on industry growth over the forecast period.

The government of India announced the National Solar Mission, intended for increasing production output of solar power and promoting new investments in the manufacturing of solar cells. This regulatory move in India is anticipated to fuel the demand for carbon nanotubes in the production of solar cells over the forecast period.

North America is anticipated to remain a promising regional market on account of the robust manufacturing base of engineered polymers such as PEEK and PEI in U.S. Government of Mexico announced the National Infrastructural Plan (2014 - 2018) for promoting the growth in the energy and electronics sectors, which is likely to have a positive impact on the market growth.

The market is highly competitive and concentrated in nature. Low business feasibility due to high manufacturing cost is expected to be a concerning factor for industry participants. Regulatory inclination to promote nanotechnology is likely to be a favorable factor for the players.

The market is majorly dominated by three companies: Showa Denko, CNano Technology, and Nanocyl S.A. Increasing number of companies in China and Russia for the production of CNT at low prices are expected to increase market competitiveness.

This report forecasts revenue growth at the global, regional, and country levels and provides an analysis on the latest industry trends in each of the sub-segments from 2012 to 2022. For the purpose of this study, Grand View Research has segmented the global carbon nanotubes market report on the basis of product, application, and region: