The global carbon steel market size was valued at USD 887.7 billion in 2019 and is anticipated to attain a CAGR of 3.4% from 2020 to 2027. Increasing focus on infrastructure development particularly in Asia Pacific countries is projected to drive the consumption of carbon steel products over the coming years. The Asia Pacific is likely to attract nearly 50% of infrastructure investment over the coming years. Countries such as India, China, and Southeast Asian countries are spending higher portion of their budget on infrastructure development to boost the overall economic growth. Carbon steel finds numerous applications in infrastructure, wherein it is used in frame materials, pipelines, fencing, gates, and variety of structural sections.

In terms of revenue, U.S. accounted for a market share of 7.6% in the global carbon steel industry. In U.S., the market is likely to be driven by a consistent increase in construction spending and moderate growth in the automotive sector over the coming years. As per the statistics provided by the U.S. Census Bureau, the total value of the construction has consistently increased in the last eight years. It has reached USD 13,07,248 million in 2018 from USD 7,88,832 million in 2011. 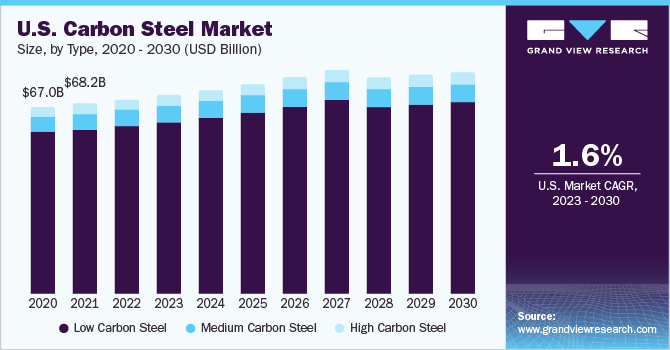 The automotive sector in the U.S. has witnessed sluggish growth in the recent years. For instance, local light duty vehicle sales in the country observed a decline of 1.6% in 2019 from 2018. However, the automotive sector in the country has achieved sales of over 17 million units for the fifth consecutive year and is likely to observe a similar trend for the long term. Carbon steel products such as gears, ratchets, shafts, and transmission parts are anticipated to witness incessant demand on account of positive long-term outlook of the automotive sector.

Based on type, the market has been categorized into low, medium, and high carbon steel. Low carbon steel is by far the largest segment and has observed the highest penetration in various end-use industries. In terms of volume, the segment accounted for a market share of 90.7% in 2019.

Low carbon steel contains carbon content below 0.25 percent by weight. It is also referred as mild steel and can be used to create various shapes ranging from structural beams to flat sheets. It possesses versatile properties such as ductility, malleability, and cold forming abilities. It is available at a low cost compared to its counterparts.

Medium carbon steel contains higher carbon and manganese contents than low carbon steel, which makes it stronger but difficult to be shaped. Considering its characteristics such as high strength and good weldability, it is preferred in the production of machine and car parts. Thus, the segment is likely to witness CAGR of 2.6% in terms of revenue.

Carbon steel finds application in shipbuilding, construction, automotive, and other applications such as energy, machinery, appliances, and material handling. The usage of steel in shipbuilding is owing to its mechanical properties and low cost. Carbon steel is of vital importance in the ship-building industry, however, the decline in industry growth along with the preference towards substitutes such as aluminum alloys is anticipated to hinder product consumption in the shipbuilding sector over the forecast period.

The construction industry held the largest volume share of 41.6% of the carbon steel market and this trend is anticipated to continue over the forecast period. Low carbon steel offers excellent forming and welding capabilities along with advantages such as no cracks on bending, flexibility, ductility, plasticity, and endurance in case of calamities like earthquakes, which make it a preferable choice in the construction industry. Carbon steel’s strength in calamity situations is its major benefit, which prevents the building from collapsing and saving its occupants. 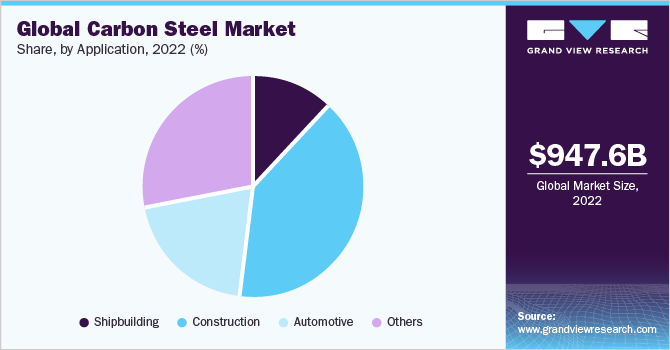 Automotive application is projected to grow at the rate of 3.2% from 2020 to 2027. Ductility and forming abilities of low carbon steel make it applicable in making the body structure and trunk closures of vehicles along with wear resistant gears. Medium carbon steel is used in the automotive industry as well as it offers higher strength and durability than low carbon, with little ductile properties. Growing emphasis towards lightweight vehicles is expected to propel carbon steel consumption in the automotive industry.

In terms of revenue, Asia Pacific held the highest market share of 66.1% in 2019 and likely to observe a lucrative growth rate during the forecast period. Expansion of shipbuilding in the recent years coupled with high industrial output from construction and automotive sectors are likely to contribute in the rising demand for the product.

The shipbuilding industry in Southeast Asia and China has witnessed growing demand in several past years. The industry has performed well after economic crisis in 2008. For instance, Philippines has been gradually growing as one of the leading shipbuilding centers since 2010 and has become the industry’s fourth largest shipbuilding hub in the world.

In terms of revenue, North America is likely to attain a CAGR of 2.3% from 2020 to 2027. In 2018, the demand for carbon steel in the U.S. benefitted from strong economic growth, which was driven by the government-led fiscal stimulus, leading to high business confidence. This led to high construction spending in the region. According to the statistics of the U.S. Census Bureau, the value of total construction put in place in U.S. increased by 3.2% in 2018 from 2017.

The market is slightly leaning towards consolidation. Recently, the industry has witnessed several mergers and acquisitions at a local level. For instance, in December 2019, ArcelorMittal, giant manufacturer in the market completed acquisition of India based Essar Steel India Limited (ESIL). With this acquisition, ArcelorMittal aims to expand its product penetration in India.

This report forecasts revenue growth at global, regional, and country levels and provides an analysis of the latest industry trends in each of the sub-segments from 2016 to 2027. For the purpose of this study, Grand View Research has segmented the global carbon steel market report based on type, application, and region:

How big is the carbon steel market?

What is the carbon steel market growth?

Which segment accounted for the largest carbon steel market share?

b. Low carbon steel dominated the carbon steel market with a share of 90% in 2019. This is attributable to carbon content below 0.25 percent by weight, resulting in versatile properties such as ductility, malleability, and cold forming abilities along with low cost.

Who are the key players in carbon steel market?

What are the factors driving the carbon steel market?

b. Key factors that are driving the carbon steel market growth include increasing focus on infrastructure development particularly in the Asia Pacific as it is used in numerous applications in infrastructure, wherein it is used in frame materials, pipelines, fencing, gates, and a variety of structural sections.