The global carbonated soft drinks market size was worth USD 392.6 billion in 2016. Increasing consumer disposable income, growing population, and increasing access to products due to the expansion of distribution channels are likely to augment the demand over the forecast period.

Sales of carbonated soft drinks are significantly based on the ability of the company to develop new products on the basis of changing consumer requirements. Market players opt for large-scale retailers and supermarkets such as Walmart, Safeway, and Carrefour for distribution to increase access of their products to numerous consumers. The development of technology has transformed the production process for the beverage industry. Companies are focusing on using equipment and technology which can improve the production output with the reduction in lead time and cost. 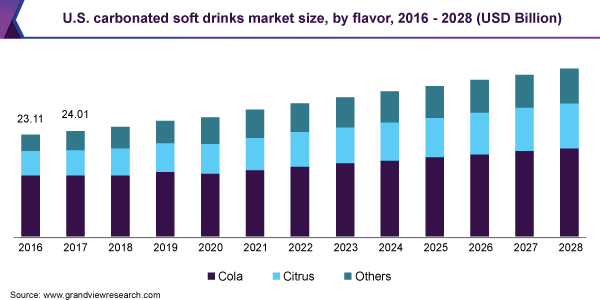 Carbonated soft drinks manufactured by PepsiCo, Coco-Cola, Dr. Pepper Snapple, and many others contain various ingredients such as artificial sweeteners, vitamins, caffeine, fruit extracts, preservatives, and added flavors & colors, etc. Such beverages are regulated by various regulatory bodies around the globe withholding a plethora of regulations owing to health concerns and safety standards.

World Health Organization (WHO) urges all countries to impose a tax on sugary drinks to reduce the obesity problem which is spreading rapidly primarily in North America and Europe. Mexico’s 10.0% tax introduction on sugary beverages led to an average reduction of 6.0% in its purchase during 2014. This is likely to reduce the consumption of carbonated soft drinks over the next eight years.

Supermarkets and general merchandisers segment dominated the market with a revenue share of 27.3% in 2016. Supermarkets generally offer low process as compared to other stores which is likely to fuel its growth over the forecast period.

Consumers generally prefer to purchase from shops that provide access to a wide variety of products under one roof. Hectic schedule, fast-moving lifestyle, and time limitation of consumers is likely to augment the growth of this segment over the coming years.

Foodservice and drinking places segment is anticipated to witness considerable growth of 5.3% from 2017 to 2025. Changing consumer lifestyle and an increase in the number of fast-food outlets & full-service restaurants is likely to increase the focus of manufacturers towards this channel.

Vending machines are gaining popularity particularly mainly due to high convenience. Their ability to offer an engaging retail experience, ease of use, and efficiency is likely to promote the growth of this distribution channel over the coming years.

North America accounted for the major revenue share of 30.3% in 2016. The region led by the U.S is the home of many globally renowned manufacturers. Growing concern regarding obesity in the U.S and Mexico coupled with taxes imposed by the government on sugar-based products is likely to restraint the growth of carbonated soft drinks in the region.

Consumers in the region have been shifting towards non-carbonated beverages on account of high health consciousness. Companies are adopting various strategies in order to cope with this shift. The introduction of small package sizes has helped the companies to maintain their position in the industry. 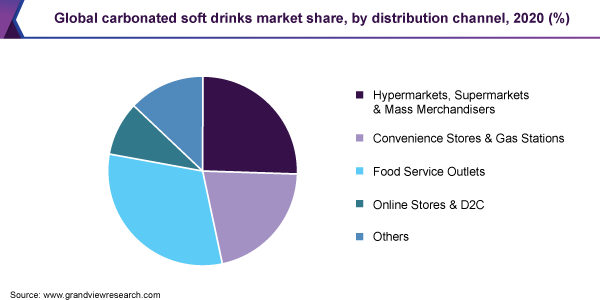 Europe led by Germany, France, Italy, and Spain is a mature market for carbonated soft drinks. The early adoption of soda-based products coupled with the high standard of living in comparison to developing regions are the major factors responsible for the development of the market.

Central & South America is expected to witness growth due to low healthcare awareness as compared to other regions coupled with a lack of regulatory policies related to sugar-based drinks. In addition, companies have been focusing on the introduction of new products in the region which is anticipated to promote growth.

The global industry is highly competitive in nature. The companies in the industry are integrated into the value chain through various stages including syrup production, bottle manufacturing, and distribution. PepsiCo, The Coca-Cola Company, and Dr. Pepper Snapple are the major market players in the industry.

Coca-Cola is one of the leading manufacturer, distributor, and marketer of soft drink syrups and concentrates. The company owns the license for more than 500 brands of soft drinks. Until 2010, the company sold its concentrates and syrups to many individual bottlers, who bottle, and distribute the final product.

This report forecasts revenue growth at global, regional & country levels and provides an analysis of the industry trends in each of the sub-segments from 2014 to 2025. For the purpose of this study, Grand View Research has segmented the global carbonated soft drink market report on the basis of distribution channel and region: