The global cardiac resynchronization therapy market size was valued at USD 5.85 billion in 2021 and is estimated to grow at a compound annual growth rate (CAGR) of 7.3% from 2022 to 2030. Growing product developments, aging population, initiatives by key companies, and prevalence of Cardiovascular Diseases (CVDs) are some of the key drivers of this market. Boston Scientific, for instance, reported cumulative distribution of around 389,000 CRT-Ds globally as of January 2021. During 2020, the company sold around 33,000 CRT-Ds; out of which, about 16,500 were registered in the U.S., which is indicative of high demand. The COVID-19 pandemic adversely impacted the market with declined demand and sales. This was due to pandemic-induced deferred or canceled elective procedures, delays in clinical trials, supply chain challenges, and reduced sales and marketing activities. 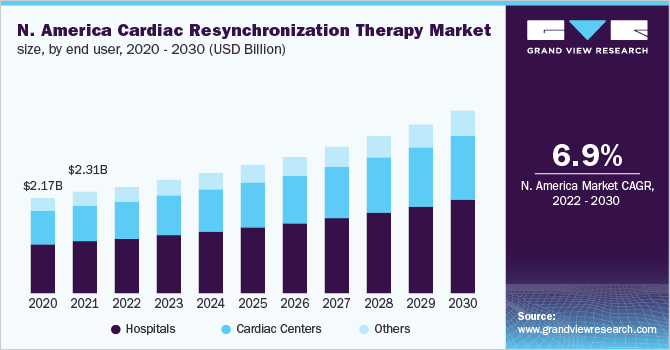 Several key companies, such as Medtronic, Boston Scientific, and Microport, reported a negative impact of COVID-19 on their financial performance and business activities. Microport, for instance, reported a 16.2% decline in its cardiac rhythm management business in 2020. The company attributed the decline to postponed outpatient visits and surgical procedures due to the COVID-19 pandemic, thus resulting in a decreased number of implants. After the initial shock and confusion about COVID-19, companies and governments began taking corrective actions to help the economy and businesses recover. These measures included policy & monetary stimulus, easing of restrictions, conditional exemptions, and other strategic initiatives.

In its April 2020 COVID-19 task force update, the Heart Rhythm Society released guidelines for managing patients with cardiac implantable electronic devices with an emphasis on limiting exposure to patients and providers. It recommended limiting in-person visits to only serious issues regarding device leads, reprogramming, or generators. Biotronik leveraged this to market its implantable Cardiac Rhythm Management devices lineup that is equipped with Home Monitoring technology for continuity of care. The American College of Cardiology (ACC), Canadian Association of Interventional Cardiology (CAIC), and other North American cardiology societies released guidelines for ethically and safely reintroducing invasive cardiovascular surgeries after the peak of COVID-19 has passed.

These guidelines supported the recovery of the CRT devices market. The growing aging population is a key factor estimated to fuel the market growth. In 2021, Statistics Korea estimated that about 8.53 million individuals are aged 65 years and older. This number is expected to reach 12.98 million by 2030. The aging population indicates a growing number of people at risk of chronic diseases, such as congestive heart failure, hypertension, and arrhythmia. This is anticipated to contribute to market growth in the country. According to a survey conducted by the European Society of Cardiology and published in the Archives of Cardiovascular Diseases in 2019, French patients were found to be more likely to receive a CRT-P implant compared to the rest of Europe.

The patients were identified to be comparatively older, with about 44.7% aged 75 years and above, had fewer co-morbidities, and had less severe heart failure symptoms. Rising product improvements, R&D initiatives by market players, and prevalence of Cardiovascular Diseases (CVDs) are expected to fuel the market growth. For instance, in February 2020, Abbott received CE Marking for its Gallant ICDs and CRT-D devices. These devices work with Abbott’s myMerlinPuls App and provide remote monitoring capabilities, thereby enhancing the company’s offerings.

MultiPoint Pacing and SyncAV feature further enhance the Gallant CRT-D system to improve patient response to CRT therapy. This supported the company’s growth objectives. The Spanish Pacemaker Registry reported that in 2020, about 3,850 CRT devices were implanted in Spain. Out of the implanted devices, 2,387 were CRT-D devices and 1,463 were CRT-P devices. The average age of recipients was found to be 78.8 years. The most frequent symptom prompting implantation was reported to be syncope in 41.8% of cases. The other symptoms were found to be dizziness and heart failure.

On the basis of end-users, the global market has been divided into hospitals, cardiac centers, and others. The hospital end-user segment accounted for the largest revenue share of the global market of more than 52% in 2021. This was attributed to the high usage of CRT devices in hospitals, as most surgeries are performed in hospital settings. In October 2019, for example, Aster Hospital, a healthcare facility in the UAE, reported CRT-D implantation in a 61-year-old man suffering from severe heart failure with frequent episodes of fast and life-threatening heartbeats.

The cardiac center end-user segment is anticipated to register the fastest growth rate over the forecast period on account of a rise in the number of cardiac specialty centers and the growing prevalence of cardiovascular diseases across the globe. According to the CDC, in September 2020, around 6.2 million adults in the U.S. suffered from heart failure. Furthermore, according to the American College of Cardiology Foundation, the prevalence of cardiovascular diseases increased from 271 million to 523 million from 1990 to 2019.

On the basis of products, the global market has been bifurcated into CRT-defibrillators and CRT-pacemakers. The CRT-defibrillators product segment accounted for the largest share of more than 58% of the global revenue in 2021. The CRT-pacemakers segment, on the other hand, is expected to grow at the fastest CAGR during the forecast period. This is owing to the increasing geriatric population across the globe, the prevalence of cardiac conditions, and product advancements by key market players. 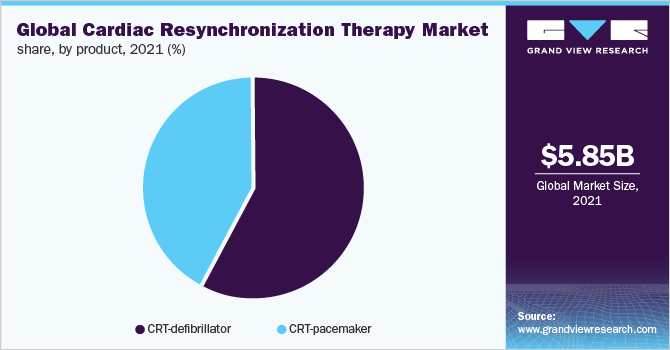 A 2020 study published in the Journal of Arrhythmia extracted and analyzed data from Japan Cardiac Device Treatment Registry (JCDTR). The study found an increasing trend in the percentage of de novo implantation of ICDs, CRTâ€Ds, and CRTâ€Ps in patients aged 75 years and above in Japan. The number of patients that received ICD implants, CRT-D implants, and CRT-P implants was found to be 17,564, 9,470, & 1,087 respectively, over 10 years.

North America accounted for the maximum revenue share of more than 39% in 2021. The large share of the region is due to the increasing geriatric population and growing regulatory approvals. Physical inactivity due to a sedentary lifestyle can increase the risk of developing chronic cardiac conditions, which may drive the need for cardiovascular care. Asia Pacific is projected to grow at the fastest CAGR over the forecast years. This is owing to rapidly developing healthcare infrastructure, growing aging population, improvement in economic conditions, strategic initiatives by key companies, and growing prevalence of cardiac diseases.

MicroPort, for example, is a Chinese company specializing in a variety of medical devices, including CRT-Ds and CRT-Ps. The company is a domestic leader in the cardiac rhythm management market. It registered a 95% year-on-year growth in revenue during H1 2021 (with a revenue of about USD 6 million) in China, owing to a wide portfolio and robust product pipeline. This growth was driven by cost-effectiveness and brand recognition, facilitating the company to cover 584 hospitals across the country.

Competition in the market is expected to be moderate during the forecast period. The top 5 companies take up approximately 90% of market shares. In addition, these companies have extensive resources, market expertise, distribution network, and are involved in deploying strategic initiatives to increase market share and profits. These strategies include mergers & acquisitions, geographic expansion, partnerships, the launch of new products, and R&D activities. Some of the key players in the global cardiac resynchronization therapy market include:

This report forecasts revenue growth at the global, regional, and country levels and provides an analysis of the latest industry trends in each of the sub-segments from 2017 to 2030. For the purpose of this study, Grand View Research has segmented the global cardiac resynchronization therapy market report on the basis of product, end-user, and region:

How big is the cardiac resynchronization therapy market?

b. The global cardiac resynchronization therapy market size was estimated at USD 5.85 billion in 2021 and is expected to reach USD 6.20 billion in 2022.

What is the cardiac resynchronization therapy market growth?

b. North America dominated the cardiac resynchronization therapy market with a share of 39.5% in 2021. This is attributable to well-established healthcare infrastructure, the increasing prevalence of cardiac diseases, and the geriatric population susceptible to cardiac dysfunction.

Who are the key players in cardiac resynchronization therapy market?

What are the factors driving the cardiac resynchronization therapy market?