The global cardiac rhythm management devices market size was valued at USD 20.2 billion in 2019. Increasing incidence of heart failures and arrhythmias has fueled the demand for technologically advanced cardiac rhythm management (CRM) devices. The use of photoplethysmography technology in wearables such as fitness trackers and smartwatches can enhance atrial fibrillation (AFib) detection and screening. For instance, the Apple Watch can check for irregular heartbeats that can be the result of AFib, as confirmed by the APPLE HEART Study at the 2019 American College of Cardiology (ACC) meeting. 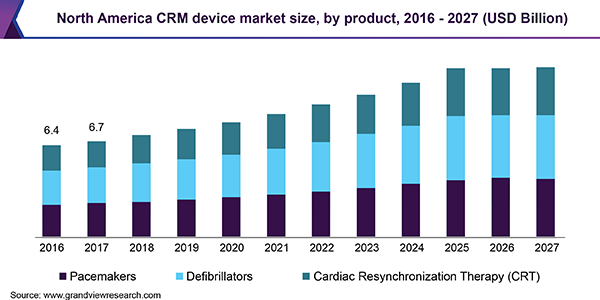 Owing to increasing life expectancy and availability of advanced technologies, the adoption of CRM devices has increased in the past few years.  Cardiac ailments have emerged as the major cause of death in recent years. According to the World Health Organization (WHO) estimates, each year, cardiovascular diseases (CVDs) result in around 17.9 million mortalities. CVDs are commonly known as the ‘silent epidemic’ since they are slow to show symptoms. In addition, they are estimated to be one of the most expensive health conditions to treat. CRM devices are not only used to manage and monitor cardiac issues but also find application in repairing, restoring, and healing cardiac activities.

Physical inactivity is a major public health concern and is known to be the second leading cause of death in U.S. Physical inactivity leads to morbidity and the development of chronic conditions such as cardiac disorders and diabetes. As per WHO, physical inactivity or sedentary lifestyle results in around 2 million deaths per year. In addition, it has been estimated that around 60% to 85% of the population in both developed and developing countries live a sedentary lifestyle. This inevitably drives the demand for cardiac rhythm management devices.

Favorable reimbursement policies have led to higher adoption of cardiac rhythm management devices by patients in countries such as Canada, U.S., and the U.K. Furthermore, increasing government efforts are expected to boost market growth over the forecast period. In the U.S., AED State Laws across all 50 states mandate that public gathering places have Automated External Defibrillators available. Under these laws, California, for instance, requires that AEDs be available at all health clubs, along with many schools, sports arenas, and airports. Such regulations have given the demand for cardiac rhythm management devices a significant boost.

The cardiac resynchronization therapy (CRT) segment is anticipated to register lucrative growth over the forecast period thanks to associated benefits such as reduced blood transfusion, risk of infections, and short hospital stay. Healthcare practitioners are increasingly recommending minimally invasive surgeries for CRT-Pacemaker implantation to curb instances of bradycardia and cardiac arrest. This preference is expected to boost sales during the forecast period. Implantable pacemakers have become a well-established treatment for sinus node dysfunction and conduction disorders. Increasing application of these for the treatment of arrhythmias and heart failure as well as in ongoing clinical investigations is a major factor driving the segment.

North America held the lion’s share of the CRM devices market due to various factors such as well-established healthcare infrastructure, increasing elderly population, and growing regulatory approvals. The rapid adoption of technologically advanced products with features such as long battery life, biocompatible materials or miniaturization, and absence of lead is also driving this regional market. Many companies are currently working on developing new devices based on existing pacemakers and implantable cardioverter-defibrillator (ICD) technologies. 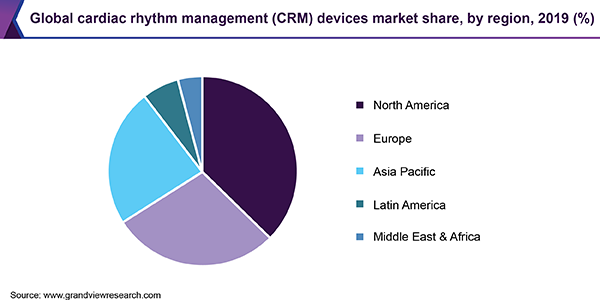 Asia Pacific is expected to grow at a lucrative rate during the forecast period. The growth is determined by rising R&D investments by international players such as the China Cardiovascular Association and the American College of Cardiology to develop ground-breaking technologies for cardiac care. Developed Asian economies still lag behind OECD nations in addressing the various causes of CVDs, including tobacco consumption. However, increasing efforts to create awareness are expected to propel the demand for CRM devices. Japan’s smoke-free policy implemented for the 2020 Olympic Games is one such move.

The market for CRM solutions is highly competitive and marked by the presence of various large and small business operators such as Medtronic, Jude Medical (Abbott), Boston Scientific Corporation, and Koninklijke Philips N.V. Key players are focusing on strategies like mergers and acquisitions, market penetration, partnerships, and distribution agreements to intensify their revenue and presence in the market.

For instance, in January 2019, Medtronic acquired EPIX Therapeutics, which was aimed at expanding the former company’s cardiac ablation portfolio to treat patients with cardiac arrhythmias. CRM device makers are also introducing new technologies to enhance product performance and augment their portfolio. For instance, in January 2019, Schiller introduced Epicardio Simulation, offering a new way to interact with a virtual heart.

This report forecasts revenue growth at global, regional, and country levels and provides an analysis of the latest industry trends in each of the sub-segments from 2016 to 2027. For the purpose of this study, Grand View Research has segmented the global cardiac rhythm management devices market report on the basis of product and region:

How big is the cardiac rhythm management devices market?

b. The global cardiac rhythm management devices market size was estimated at USD 20.17 billion in 2019 and is expected to reach USD 21.5 billion in 2020.

What is the cardiac rhythm management devices market growth?

Who are the key players in cardiac rhythm management devices market?

What are the factors driving the cardiac rhythm management devices market?