The global cashew milk market size was valued at USD 37.8 million in 2018 and is expected to register a CAGR of 5.0% from 2019 to 2025. Increasing awareness about the benefits of cashew milk such as improvement in heart health, iron deficiency anemia, blood sugar control, eye health, and skin health is a key factor driving the market.

Moreover, cashew milk provides nutrients and proteins, helps in blood clotting, offers anti-cancer effects, increases antioxidant defenses, and lowers cholesterol levels. In, addition, it is easy to digest and rich in omega 6 fatty acids, thereby driving the demand for the product. Individuals having lactose intolerance are the significant consumers of dairy alternatives, cashew milk being one of them. 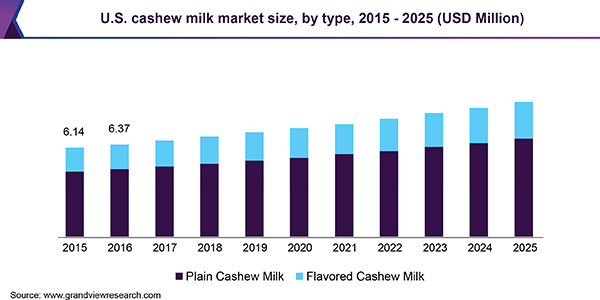 Various companies provide cashew milk with quality and features. For instance, So Delicious Co. provides unsweetened cashew milk beverages, which is a non-GMO, soy-free, gluten-free, vegan, eco-friendly, dairy alternatives, and low-calorie milk. Consumers are more inclined towards the adoption of a vegan diet owing to increasing concerns over animal rights, which is expected to be a key factor driving the market.

Rising consumer focus on well-being such as intake of nutritional values and high proteins and vitamins offered by milk substitutes are driving the demand for the global market. Companies are spending on research and development to distribute the product through emerging online channels and make it feasible for the consumers to consume. For instance, Elmhurst provides cashew milk with 11 cashews in every glass. The product is non-GMO and has no high fructose corn syrup and artificial flavors in it. Moreover, it is carrageen-free, dairy free, gluten-free, kosher, and vegan in nature.

In 2018, plain cashew milk led the global cashew milk market with a revenue of USD 27.5 million. The high demand for plant-based milk in the creamy fluid texture due to increasing health consciousness has fueled the segment growth. Richness in vitamins and minerals such as magnesium and vitamin K is another factor driving the segment. To add texture and natural sweetness, companies use wholesome dates, which are high in fiber, B6, potassium, iron, and polyphenols as healthy antioxidants. For instance, Forger Project launched unsweetened plain organic cashew milk with no carrageen and no added sugar, which provides medium-chain triglycerides, a form of saturated fatty acid beneficial for heart and brain health.

Supermarkets and hypermarkets were the leading distribution channel with a 46.5% share in 2018. This distribution channel has been gaining traction owing to its benefits such as providing the customers an advantage of scanning the product before purchase and the presence of a store associate who helps them choose the right product, which influences the buying decision. Supermarkets such as reliance fresh, Big Bazar, easy day, and more are the major distributors of cashew milk for various companies. 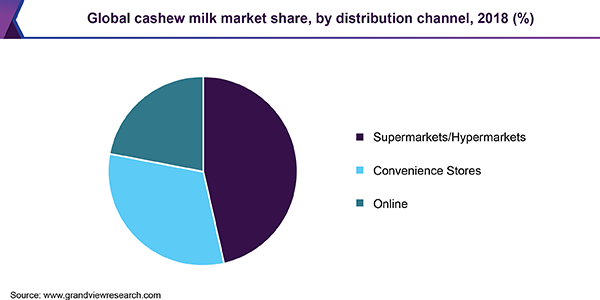 The online distribution channel is expected to expand at the fastest CAGR of 5.7% from 2019 to 2025. With an aim to reach out to the vast consumer base, companies are tying up with online retailers as well as introducing their e-portals such as Alibaba, Amazon, Walmart, Big basket, nature’s basket, luckyvitamin.com, and delights food (India). For instance, Forager Project Company has its own portal as well as tie-ups with various other online portals such as prime now, fresh direct, mylk guys, Instacart, peapod, thrive market, and milk and eggs.

In 2018, North America accounted for the largest share of 34.3%. High demand and manufacturing in countries such as U.S. and Canada are fueling the market growth due to the adoption of lactose-free products. This is attributed to changes in eating habits and increased awareness about the benefits. The growing vegan population in North America has resulted in an increase in the demand for plant-based milk, which led to an increase in the adoption of cashew milk. Moreover, a hike in the number of sellers and manufacturers has led to an increase in the availability of cashew milk in North America. Companies such as White Waves Services Inc.; Forgar Project; Provamel; and So Delicious are contributing to fulfilling the demand of consumers for cashew milk.

Asia Pacific is the fastest-growing market, expanding at a CAGR of 5.9% over the forecast period. The growth is attributed to increasing in awareness, changes in taste and preference, and concerns over health. Consumers are increasingly spending on these products due to increasing disposable income and health benefits associated with the products. Increasing focus on the intake of cashew milk due to growing demand for non-dairy products and high lactose intolerance is a key factor driving the market in the region. Companies such as so delicious and Elmhurst are expanding their base in APAC.

This report forecasts revenue growth at the global, regional, and country levels and provides an analysis of the latest industry trends in each of the sub-segments from 2015 to 2025. For the purpose of this study, Grand View Research has segmented the global cashew milk market report on the basis of type, distribution channel, and region: