The global cervical dysplasia market size was valued at USD 509.2 million in 2019 and is expected to expand at a compound annual growth rate (CAGR) of 7.3% from 2020 to 2027. Cervical dysplasia occurs when there is precancerous or abnormal cell growth around or in the cervix. The presence could lead to cervical cancer if not diagnosed at the right time. Human Papillomavirus (HPV) is one of the primary causes of cervical dysplasia. The rise in the number of governments funded screening programs for cancer is a major factor driving the market for cervical dysplasia. For instance, in March 2019, Public Health England launched the first government campaign to create awareness about cervical dysplasia screening using smear tests. The same source mentions that the proportion of women aged 25 years and above who go for smear tests is currently the lowest in 2 decades due to fear and embarrassment associated with the Pap test. 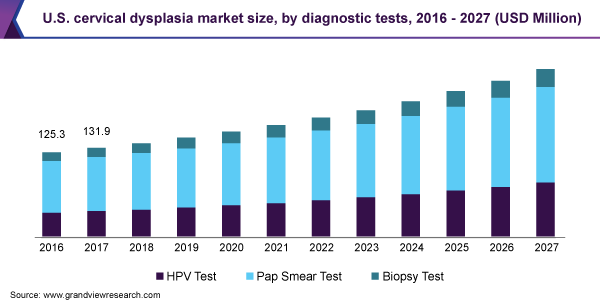 NHS digital mentioned that in March 2018, the percentage of women screened was about 71.4%. A newly launched campaign by PHE involved collaborations with various social media sites and national media to spread awareness through various platforms across England. Thus, a rise in the number of initiatives undertaken by the government to enhance the screening of cervical dysplasia is expected to boost the market growth in the near future.

The rising prevalence of cancer is one of the major factors driving the market for cervical dysplasia. A report published by the WHO stated that in 2018, an estimated 5, 70,000 new cases were anticipated to diagnosed worldwide. About 3,11,000 deaths were recorded in 2018 across the globe. The report also states that this disease is the most common HPV-associated cancer in women. Therefore, an increase in the prevalence of the disease is anticipated to enhance the screening of lesions caused by the disease in the near future.

Diagnostic tests dominated the cervical dysplasia market and accounted for the largest revenue share of 70.7% in 2019. This is owing to its efficacy, flexibility, reimbursement policies, and cost-effectiveness. The cost-effective nature of these tests resulted in their higher penetration in low- and middle-income countries.

The rise in the initiatives undertaken by the government is expected to boost the usage of Pap smear tests in the near future. For instance, in 2017, “Smear your Mea” was founded, which is a community funded by the New Zealand Health campaign. It encourages women to get smear tests done and prevent the occurrence of cancer. Such initiatives are one of the major factors expected to fuel segment growth during the forecast period.

Growing advancements in HPV testing technologies is also a major factor expected to fuel segment growth during the forecast period. In March 2018, Fast Track Diagnostics expanded its sexually transmitted infections portfolio with the addition of a new series of HPV tests. The tests include multiplex real-time PCR kits that enable the detection of HPV 18 and 16 and 12 other subtypes. Its approval as a primary test, global availability, and increasing adoption due to higher sensitivity are expected to drive the HPV testing market during the forecast period.

Colposcope devices are considered as one of the major diagnostic devices for the diagnosis of cervical dysplasia. Rise strategic initiatives undertaken by major market players are expected to propel the growth of the diagnostic devices segment in the near future. For instance, in March 2016, DYSIS Medical Ltd. entered into an agreement with ITEM Medical Technologies in order to support the National Screening Programme in Turkey. DYSIS Medical Ltd. provided their Colposcope devices to the Turkish Ministry of Health for the screening of cervical cancer. Therefore, growing initiatives as such are expected to enhance the usage of diagnostic devices in the near future.

Hospitals held dominated the market for cervical dysplasia and accounted for the largest revenue share of 56.8% in 2019. This is owing to the availability of technologically advanced diagnostic devices and tests and the presence of various reimbursement policies. In addition, rising healthcare infrastructure has enabled various hospitals to equip various technologically advanced diagnostic systems thus increasing the overall patient satisfaction as well as diagnostic efficiency.

Also, growing initiatives undertaken by various hospitals to enhance the early diagnosis of cancer is expected to enhance the growth of the market for cervical dysplasia during the forecast period. For instance, in May 2019, an agency of Provincial Health Services Authority, B.C. Women's Hospital and Health Centre partnered with Surrey’s various family doctors and other communities to connect with women who consider the routine screening of the disease is quite challenging as some women might find it difficult to access doctors or are living in remote and rural areas. 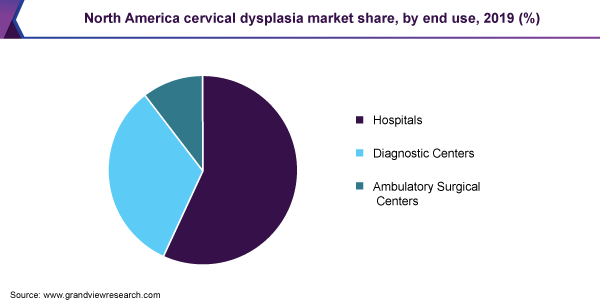 Thus, B.C. Women's Hospital and Health Centre undertook an initiative to send self-collection kits for HPV screening by mail. After the test is performed, the patient can return the kit for further testing. Initiatives like these are expected to increase the adoption of HPV screening kits in the near future.

North America dominated the market for cervical dysplasia and accounted for the largest revenue share of 40.4% in 2019. The region is anticipated to maintain its position throughout the forecast period. Technological advancements, increase in prevalence of various associated diseases, rising awareness and screening programs, and supportive initiatives by government and private organizations to increase the adoption of HPV testing are factors anticipated to drive the market for cervical dysplasia in the region.

In addition, in December 2018, Nurx-a telemedicine startup based in California-launched an HPV testing kit, which is a direct-to-customer product. The test is free of cost with insurance and facilitates the detection of 14 high-risk HPV genotypes. This initiative encourages women living in rural areas as well as those without insurance with screening tests. Thus, North America is expected to witness exponential growth owing to the rise in initiatives undertaken by startups in the region to increase the adoption of HPV tests across women aged 25 years and above.

Growing initiatives undertaken by the government in Europe to enhance cervical cancer screening is expected to fuel the growth of the market for cervical dysplasia in the near future. For instance, in January 2016, the National Cervical Screening Programme and the Irish Family Planning Association launched the Pearl of Wisdom Campaign that marks the beginning of European Cervical Cancer Prevention Week. The campaign highlights the importance of regular screening for the disease.

Women aged 25 years and above in Ireland were encouraged to undergo free smear tests to prevent the disease. Through the National Cervical Screening Programme - CervicalCheck, women aged 25 years and above can avail smear tests for free on a regular basis from any registered practitioner in the region. Thus, increasing initiatives undertaken by the government to enhance early diagnosis is anticipated to enhance the growth of the market for cervical dysplasia.

The major players are mostly involved in contributing to innovations and technological advancements diagnostic test kits as well as devices. Also, in July 2019, Roche expanded its Global Access Program to include HPV, hepatitis C & B, and Mycobacterium tuberculosis diagnosis products for middle- and low-income country programs where the prevalence of the disease is the highest. This expansion aims at improving the access to various cost-effective resources, increasing contribution to eliminating these diseases in regions with rising incidence, and also implementing multiple scale-up programs. Therefore, increasing initiatives undertaken by major market players to curb the incidence of cancer by improving diagnosis and screening is expected to propel the growth of the market for cervical dysplasia during the forecast period.

The rise in the approval of products is also a major factor anticipated to boost the growth of the market for cervical dysplasia during the forecast period in Germany. For instance, in March 2019, Abbott Laboratories received a CE mark for its Alinity m diagnostics assays and systems. The system is used for testing HIV-1, hepatitis B virus, hepatitis C virus, and sexual health-related testing for Neisseria gonorrhoeae, Mycoplasma genitalium, Chlamydia trachomatis, Trichomonas vaginalis, and HPV testing. Therefore, an increase in product development by major market players is expected to propel the growth of the market for cervical dysplasia in Germany. Some of the prominent players in the cervical dysplasia market include:

This report forecasts revenue growth at global, regional, and country levels and provides an analysis of the latest industry trends in each of the sub-segments from 2016 to 2027. For the purpose of this study, Grand View Research has segmented the global cervical dysplasia market report on the basis of diagnosis type, end-use, and region:

How big is the cervical dysplasia market?

What is the cervical dysplasia market growth?

Which segment accounted for the largest cervical dysplasia market share?

b. North America dominated the cervical dysplasia market with a share of 40.3% in 2019. This is attributable to rising healthcare awareness coupled with cloud-based technologies acceptance and constant research and development initiatives.

Who are the key players in the cervical dysplasia market?

What are the factors driving the cervical dysplasia market?

b. Key factors that are driving the cervical dysplasia market growth include a rise in the number of governments funded screening programs for cervical cancer and the rising prevalence of cervical cancer.